I always have a secondary charged battery with me.
If one day battery is not enough I simple replace battery. As soon as possible I simple recharge first battery and continue use phone with secondary battery. This is better than carry big powerbank and waiting while the phone is charging.

The battery on the Librem 5 will only be replaceable “with tools,” so it won’t be convenient to swap the battery.

We definitely will have a user replaceable battery. It will not be soldered to the board nor glued into the case. But it will involve some minutes of work and probably also some tools (screw driver) to replace it. So the obsolescence issue is limited or none.

The good thing is that Purism uses standard Phillips screws in its Librem 13/15 and is likely to do the same in the Librem 5, so you probably don’t need any special tools to change the battery.

Given the stated goal of avoiding planned obsolescence, I’m hoping that Purism will sell at least the battery and screen, since those are the two parts that are most likely to need replacing. However, it would be even better if Purism uses standard parts found on other phone models, so that we could buy batteries and screens from multiple sources.

I wondered about batteries too, but your question puzzles me. Isn’t it better to keep the device running with the external power pack? I avoid power-downs & reboots.

Maybe someone could develop a custom back that lets you clip on the primary battery, while a secondary battery provides for the phone’s current needs during the swap. I really do not mind the extra thickness. NFC and wireless charging would also be great.

We will definitely sell separate batteries. Concerning screens, I see the point and we need to see how we can include this in the mechanical design (MD). Most commonly these screens get glued into the case and removing could become a major effort and pain. But since we are in direct contact with the factory we can (and will) stock spare parts and will try find ways to make most of the parts replaceable. But I can not promise this for all and everything since making it replaceable often also requires additional mechanics or requires more space or both.

23 Likes
So it has shipped. Where are the reviews?
Librem 5 August update
Librem 5 — Promise Delivery Chart
Comparing specs of upcoming Linux phones
Price of phone is so high :(
Librem 5 replaceable battery purchase
Torrone August 7, 2019, 8:14am #6

Concerning screens, I see the point and we need to see how we can include this in the mechanical design (MD).

Does this mean that the L5’s mechanical design is not yet finalised?

Does this mean that the L5’s mechanical design is not yet finalised?

Well, my guess from what she said is that they are planning to have the mechanical design finalized in 3 weeks. But she didn’t literally say that, but it sounds very likely to me.

I believe that having the screen “hard to replace, but replaceable” is OK for the first hardware release… We cannot have everything done perfectly from day one.

Personally, I would be satisfied with the possibility of ordering a spare screen and an official guide on… Ehm… detaching the current screen correctly, i.e. something like “you may try to replace it, and that’s how it is better to do this, but no warranty, dude”.

Personally, I would be satisfied with the possibility of ordering a spare screen and an official guide on… Ehm… detaching the current screen correctly , i.e. something like “you may try to replace it, and that’s how it is better to do this, but no warranty, dude”.

Another option would be to sell the casing+screen as a kit. I’ve seen this done before on a few phone models. That way it might be a bit more expensive, but the success rate of the screen replacement will be higher.

Though I already figured on this, I believe this means the phone is not shipping in August. So September it is

Nicole, Thanks for responding.

Concerning screens, I see the point and we need to see how we can include this in the mechanical design (MD). Most commonly these screens get glued into the case and removing could become a major effort and pain. But since we are in direct contact with the factory we can (and will) stock spare parts and will try find ways to make most of the parts replaceable.

I hope that Purism can find a way to offer just the screen, because the screen is the most important element for repairs. A survey by SquareTrade in August 2018 found:

The study found that 66% of smartphone owners damaged their phones in the past year, with cracked screens leading the way as the most common type of damage (29%). Scratched screens (27%) and nonworking batteries (22%) took second and third place respectively, with touchscreen issues and chipped corners/sides tying at 16% each.

While we all think of ourselves as responsible smartphone owners, damage is often the result of simple clumsiness. By far, the most common cause of smartphone damage is dropping a phone on the ground (74%). Others are the phone falling out of a pocket (49%), being dropped in water (39%), being knocked off a table or counter (38%), being dropped in the toilet (26%) or falling out of a bag (22%).
…
Keeping Cracked Screens: Every hour, approximately 5,761 smartphone screens break in America. Thirty-eight percent of smartphone owners with a cracked screen don’t get them fixed; 34% of that group say repairing them was too costly. Eighty-five percent of smartphone owners use a phone case, yet 27% of Americans reported damaging their phone while it was in a case.

Dealing with Damage: Since out-of-pocket repairs are steeper than most people expect, it’s no surprise that 65% of smartphone owners have avoided fixing a broken phone because of high costs. Additionally, 67% admit they would not repair a damaged smartphone that still worked, and 59% have chosen to upgrade to a new device rather than repair a broken phone.

Here is a Motorola survey from 2015 about cracked screens:

And another survey from Gig Giraffe in Australia in 2016: 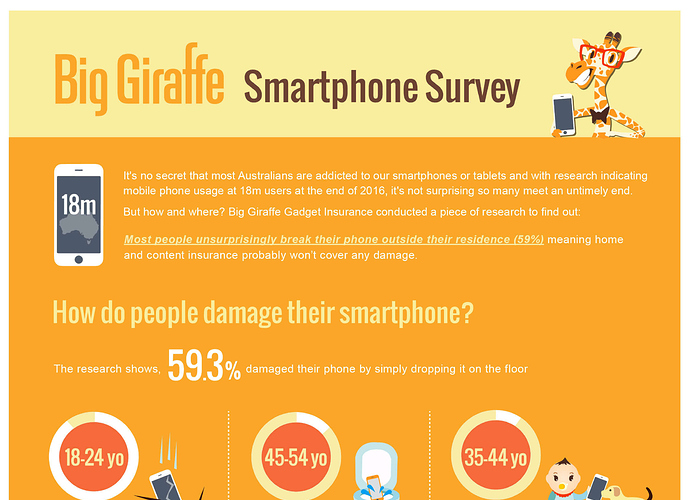 These numbers from SquareTrade, Big Giraffe and Motorola might be inflated, since SquareTrade and Big Giraffe are trying to convince people to buy 3rd party insurance on electronics and Motorola was promoting their shatterproof screens, but I think that they show that the ability to fix a broken screen is very important for the longevity of the phone.

Sorry for off topic but I read about planned weakness of screen (forced by apple by push out capacitive touchscreen to top of phone body) in all new smartphone. Immersed sceen (like in old smartphones before iPhone) with resistive touchscreen was much more reliable.

I believe that having the screen “hard to replace, but replaceable” is OK for the first hardware release… We cannot have everything done perfectly from day one.

So it is OK because we can later just buy a new phone? That is completely contrary to the L5’s goal of being a long lasting phone.

The Librem 5 will be the first and only impression of Purism phones and will therefore completely define Purism’s reputation in the phone market. If they mess this one up then many L5 buyers might not even be willing to ever buy another phone from Purism again.

It’s ok because it’s impossible to make a perfect phone. Trade-offs must be made throughout the design process to ensure to deliver which was promised within the planned costs and deadlines.

I get the point of a first try being hard but the first impression is also extra important because Purism will have no reputation in the phone market to fall back on. Releasing a sloppy first phone with the intention of making up for the sloppiness in the successor can be a bad idea since they may never get enough funding for a successor if they make a bad first impression. Being known in the phone industry for nothing but producing a single sloppy phone does not place one in a good position for getting funds for a successor.

On the other hand if they manage to make this phone really good, then it might be much easier to get funding for the next phone.

Either way I do not think Purism is going to release a sloppy phone. I am just saying that the first phone is not a good opportunity to be sloppy.

Surely the Librem 5’s screen will not be any more difficult to replace than the screens on other phones. I’m glad options are being considered to make it easier than other phones, but if, in the end, that isn’t feasible, I’m sure it will not be too difficult to replace it (especially if the appropriate adhesive gasket is sold along with the screen, so that we don’t have to cut it out ourselves from raw material).

My joke in a previous post about four triple-A’s still applies.

Right ? I guess theyre going to really push the limit of this shipping in Q3 claim considering 3 weeks from now will be the 28th of august when we are still getting “news on the hardware”

Ok , so I guess I can stop checking my email everyday for the modem preference email .

Same here. Been checking the website every morning to look for news & events