Wait, what? they have 2 power-managment silicon bugs, which they refuse to fix? Holy shit.
And yes, 2x weaker gpu and slightly better (but still shitty 4 cpu cores) doesn’t make it better. Looks like I will need to put my L5 Fir batch order to later batch. I really don’t want a piece of shit SoC.

Whoa. RK3588 looks really promising. I just hope, that transition would be smooth. I am worried about driver support of Arm Mali “Odin” MP4 GPU.

Personally, in ideal case I would want that Purism collaborates with many similar thinking organizations (such as Raspberry pi foundation (which expressed a wish for binary blob free RPi)) to slap together a good RISC-V mobile SoC, with help of Sifive or similar company. In that way they would have saying not to put IP in, which requires proprietary drivers to work. Just think about it. In that way Purism could reduce separate chips on the board and not reverse engineer proprietary drivers.

to slap together a good RISC-V mobile SoC

It is horribly under-powered, expensive devkit. Librem 5 seems like an absolute bargain compared to that thing. There is no RISC-V SoC. The RISC-V cpu can be implemented in FPGA and then it will run at 100MHZ, which is nothing.

Yeah, I am glad that the documentation is free to access at all and somewhat complete, so I’m not going to diss it a lot, but it’s confusing in several important places. Still, that we have to use a datasheet for the I.MX7 series to find out half of the info about the CSI interface is silly.

As far i know NXP fixed the big bugs related to energy leaks on the soc, so all L5 it fine.
Starting from Linux 5.10 Purism is working on the support of the camera and gps and smart charching.

At the kernel side GPS has worked for a while already - you can access NMEA data with sudo cat /dev/gnss0 and observe it getting a fix. What’s still missing are some user-space parts, but that’s coming (you can already get it to work on apps that use geoclue, but it needs some manual assembly at the moment).

Wow GNSS is already supported on the kernel. Thank you very much. 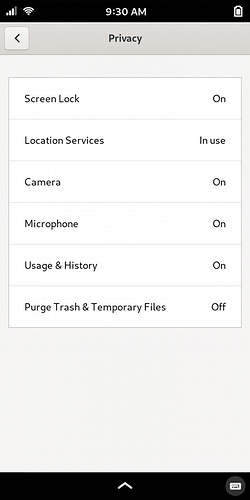 Nice. It only need a button in Posh to ON OFF the GNSS.
At present I only need a soft back cover to protect my L5 of falls TO USE IT AS MY DAILY DRIVER.

Can one also select which GNSS should be used in case one particular system is sending wrong coordinates?

you can already get it to work on apps that use geoclue, but it needs some manual assembly at the moment

Where can I find directions on how to do this?
Otherwise, when will it be fully functional?

Geoclue doesn’t open GPS devices by itself, so it needs to work with gps-share. There’s https://github.com/zeenix/gps-share/pull/17 that makes it work with new GNSS kernel subsystem that we’re using.

That should already work as a proof of concept, but gps-share works by broadcasting NMEA data over network, which is likely something you don’t want

Therefore there’s https://gitlab.freedesktop.org/geoclue/geoclue/-/merge_requests/79 and https://source.puri.sm/angus.ainslie/gps-share/-/commits/local to make it work with local Unix sockets as well.

Is look that we will have GNSS working on apps very soon. Thank you @dos for the amazing work well done on L5!

I would have payed an extra fee not to have this camera bull**** in my phone. If I want to take pictures I use a camera. If I want to take bad pictures I am stupid. Still no excuse to continue this marketing fart called camera in a phone. Yes I witnessed how all that started as a marketing initiative to charge more MMS usage. Went wrong. Now we have to suffer from useless and expensive camera crap in the little computers called Smartphone. I would still pay a premium NOT to have this crap wasting resources and space and cause privacy issues.
What point is so difficult to understand to make me pay and possess devices I do not want? Camera is for photographs. Phone for talking. Computer for data processing.
My demand: No camera stuff at all in phones.

Camera is for photographs. Phone for talking. Computer for data processing.

I pretty agree with that sentence, however people need to take simple reminder pictures for work or leisure (not necessary high quality artistic photo), perform some data processing and obviously talking, all this carrying around only one small device.
I don’t think a no camera smartphone would be successful nowadays.

I would have payed an extra fee not to have this camera bull**** in my phone.
[…]
My demand: No camera stuff at all in phones.

You can easily open the phone, grab the cameras (maybe not that easy) and throw them in the bin and save that extra fee.
If you want to rant more about that, you should open a new topic and let this one be about camera support dev.

I only have so many pockets when I travel. And I pack very light.

My phone takes excellent pictures. And it’s always on me when I walk out the door.

Camera is for photographs. Phone for talking. Computer for data processing.

Feet for walking. Gum for chewing.

Nobody really cares. To each his own. Whatever

I just made that comment so the Purism site censor can flex his muscles again.
Censorship is censorship. Lighten up Francis.
Didn’t mean to offend anyone. Sorry if i did.