I think that it is a free-for-all by default

That was my impression.

IANA has a registry for schemes but it seems that was mostly created in a reactive, after the fact, and historical manner. So BigSnoop (Apple / Google) can register new schemes if they want.

I note that the IANA registry even contains sms: (RFC 5724) while in fact smsto: is being used in the wild. (It may be entirely appropriate not to use sms: if the syntax being used does not comply with the related RFC, and non-compliance appears to be the case here.)

wifi: is registered and it refers the reader to the “Wi-Fi Alliance Wi-Fi Protected Access 3 (WPA3) specification” for the syntax (but I don’t have a copy of that document).

A camera app is not the first place I’d look for barcode-scanning functionality.

That’s the way it works on the iPhone though. The camera app always (continuously) analyses the image in the viewfinder for a valid QR code and if there is one then a dialog box pops up, giving you some indication of what would happen if you proceed. Touching the dialog box “opens” the QR code, where the meaning of “open” depends on the scheme. (So, while one is using the camera app, there is no need to take a photo.)

I think there are solid arguments both ways.

From a security point of view, it may be safer to have a dedicated QR code app - so that visiting an unsafe web site (drive by attack) requires more explicit actions on the part of the user i.e. launch specific app and confirm to proceed. A dedicated app would be able to give the user more information about the contents of the QR code, which the user would be able to use to make an informed decision about whether to proceed. (Compare that with the existing iPhone camera app where the dialog box is minimalist and the user is exercising a high degree of trust.)

The counterarguments would be mostly around a) familiarity b) proliferation of apps (my Librem 5 screen already has too many apps, with no obvious way to organise them).

That’s the way it works on the iPhone though. The camera app always (continuously) analyses the image in the viewfinder for a valid QR code and if there is one then a dialog box pops up, giving you some indication of what would happen if you proceed.

I just tried this on an old iPad Mini, which was foisted upon me. I always thought it was odd that the iPad didn’t have a way to scan QR codes. Alas, the camera app didn’t seem to do anything. The iPad is stuck on iOS 9, because Apple, so I’m guessing they added this feature quite recently (i.e. in the last five or six years).

The iPad is stuck on iOS 9, because Apple, so I’m guessing they added this feature quite recently (i.e. in the last five or six years).

It was definitely added - in the sense that there was a time that it did not work this way and you needed to install a dedicated QR code app (which I did at the time). Sorry I don’t remember how long ago that was but yes maybe it has been around for five years.

As far as the Librem 5 goes, I am happy either way - built in to the camera app or a dedicated app. I just need a working camera i.e. a way to capture an image. I can do the rest myself with a shell script.

I can do the rest myself with a shell script.

Are you intending to work on something like CHDK (https://chdk.fandom.com/wiki/CHDK) on the Librem 5 Camera?

Um, no. Nothing so fancy. I just need QR code scanning to work - because of COVID.

@irvinewade QR codes are bad and have a much bigger potencial for bad people to hide their malicious code in it so once you scan the QR code, a malicious code in a specific line in background is injecting RAT into your phone. See hack contests for example.

Say no to QR codes.

@wednesday That would only be true if you have an shitty QR code scanner which allows running the contents as code or if it automatically follows whatever resource is pointed to by the QR code (e.g. website) and use a vulnerability in the browser to do the hack.

A proper QR code scanner reads what is on it, but does not act on it until the user accepts the action. For example, asks the user “would you like to open the webpage www.shadywebsite.com?”.

That would only be true if …

I created a separate topic for following this line of enquiry.

This is the version that contains color calibration, white balancing presets and fixed colors in the preview. Together with recent kernel it should be able to take nicely looking photos from both rear and front cams - although rear cam’s operation can still be spotty as the kernel driver still needs some improvements (restarting the app or switching the cameras back and forth usually make it behave again meanwhile). 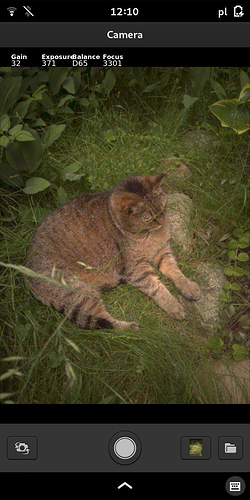 OK, I admit I was using the Librem 5 (Megapixels) to photograph QR codes that are displayed on my screen, which in turn had been photographed by me around the place with another phone - so the quality was probably poorer than usual. However the quality was good enough for zbarimg to find and decode the QR code, which is all I wanted.

I look forward to my first real QR code scan.

Latest Megapixels for amber does not save pictures from the main camera. If you hit the button to take a shot, the saving changes to busy and stays there for ever. If while in this state you switch to selfie camera it immediately takes the shot from the selfie.

Anyone else having this behavior?

This is a problem with the kernel. It sometimes works, and sometimes doesn’t.

Be sure to always boot with the camera switch on.

I always have the camera on. Today it has not worked at all. I did at least 3 reboots.
At least it is a known issue, so people will look for the solution. Thanks.

It is final for me with the latest state of amber: the main camera does not work (in the sense that can not save a picture) no matter how many reboots I do.

If it’s any consolation, this is happening for me too. It has previously worked, but not now. I likewise booted with the camera on.

I guess we’re waiting for a future kernel update …

I did a sudo apt install megapixels, as it doesn’t show up by searching the PureOS store on the L5. The version is the same one that @dos said.

The view is stuck on selfie, and doesn’t switch to rear camera when I tap the button. I had to adjust the phone’s brightness to even see a dark and grainy image, no matter the settings for Gain, Exposure, Balance, and Focus.Also, it doesn’t save, just spins.

So there are still a lot of bugs, but we’re getting there.

You are experiencing most of the same bugs that I am. It feels as if it has gone backwards slightly, as I won’t be able to scan QR codes at all now. (Half-serious question: Would a USB webcam work on the Librem 5? I think that would attract some attention in the supermarket though. LOL.)

This was taken two days ago using a Librem 5 Evergreen running PureOS byzantium, using the “megapixels” app version 0.16.0-1pureos2, it’s one of my favorite views of Stockholm, from the top of the Västerbron bridge, looking east: 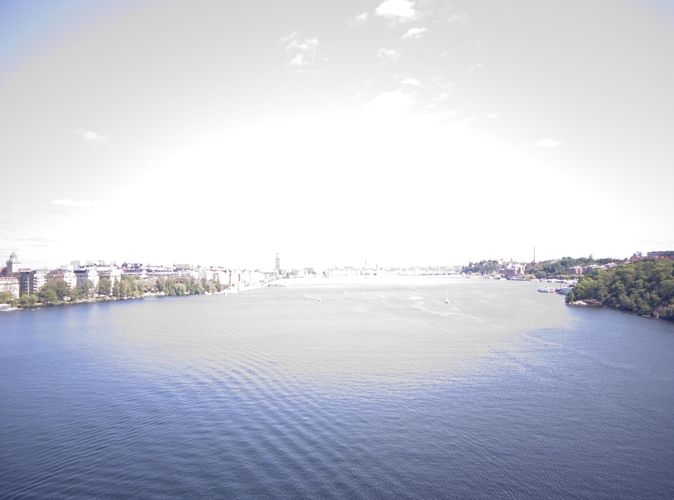 This was on a bright sunny day (but the sun was behind me, not shining into the camera), the sky was a beautiful blue color that is for some reason lost, it looks mostly white/gray in the picture. In the top-left corner of the picture a bit of the blue sky color is seen, but really most of the sky had that color.

Does anyone here have some idea about what happens here, is there some way to tweak things to make this kind of picture look better?

Here is what it looked like when I aimed a shot more down towards the water, the dark part at the bottom is the shadow of the bridge: 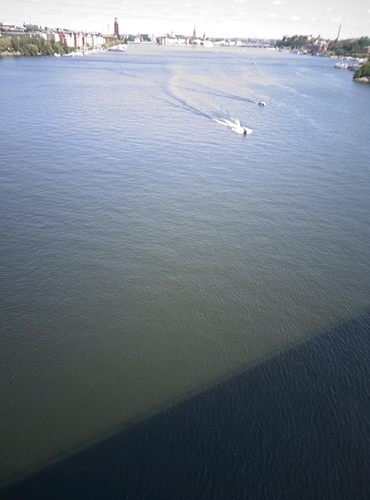 Does anyone here have some idea about what happens here, is there some way to tweak things to make this kind of picture look better?

You’re probably getting some vignetting in the corner, where the light intensity is lower, and it doesn’t get overexposed. Just drop down sensitivity settings until color appears. The three primary colors are not captured evenly, leading to weird stuff like that.

Just nothing but a small line to say I love the progress so far and I can’t wait to take receipt of my L5 in good time. Keep up the great work.