Hotspot capabilities would be nice - specially at first when I will have moved my SIM to the Librem5, while still using apps on my old phone.

really am hoping that hotspots will be possible. That is very important for me.

Hotspots are actually working in Gnome trough network-manager should be the same in the Librem 5.

I hope WiFi hardware support this.

According to this stackexchange post (https://unix.stackexchange.com/questions/405282/finding-capabilities-of-wifi-driver-device), running “iw list” will tell you if the hardware can work as an AP or not.

So, I booted up the ol’ dev board, loaded the wireless driver module, and ran that command. The supported interface modes list, looks like this :

So, I’m going to say, “yes” AP mode will be supported. To turn the device in to a hotspot, you only need to set up NAT based routing in order to allow the data portion of the cell modem to be shared.

Which would mean, to me, that the “worst case” scenario for making the Librem5 a “hotspot” is that you might have to install some packages, and do a little manual configuration. (Assuming there isn’t a GUI way to do it at launch time.)

I believe this should accomplish the task: 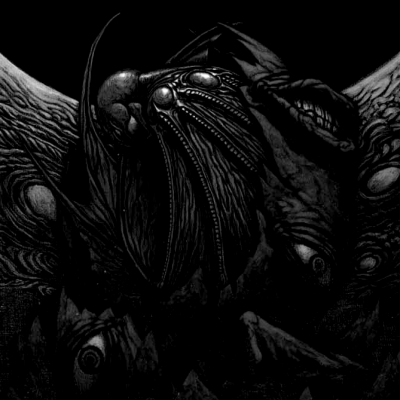 Would someone know if the Librem 5 can be used as a hotspot while being connected to a WiFi spot ?

I find it quite useful to be able to have only my phone connected to a WiFi somewhere and then my or others’ computer connected to my phone.

The iw list command also has a section valid interface combinations for my card it supports 3 connections on 2 channels. So its possible.

For the phone as far as i know the redpine rs9116 is used and this indicates that multiple connections at the same time are possible. It says even multiple APs. So chances are good.

I don’t know if the gnome settings gui is capable of handling this. So one might need to get the hands dirty in the commandline to do it.

This is one of the big advantages of a free phone that doesn’t receive much attention. The owner can decide how to use their data subscription that they purchased, sharing it with others, if they want to. That is their personal decision, similar to allowing a guest to use a home WiFi network. This offers a lot of potential privacy benefits too, e.g. allowing a stranger within WiFi distance to access the Tor network through my internet connection.

I don’t understand why a Wayland vs X11 display needs to even be relevant. The Wifi server configuration on the Librem 5 can be defined in a file that can be modified by any text editor, just like any other Linux text file. The WiFi clients on Android and Apple devices can install a customized crude terminal program (that should be relatively easy to write), that facilitates the configuration in the client device, via the selection of Wifi sources and password entry that are required to make a secure connection between the devices, but that could all be entered from a terminal in the client device. After the devices have connected, all that happens are streams of data transferring between the devices, none of which need a display.

Am I wrong in thinking that the Wifi connection can be setup via terminal connections and that the data itself is independent of any display?

I connect to a VPN over cellular. A great thing I noticed is that the data to the Wi-Fi hotspot is also routed through the VPN. GNU/Linux does the right thing. This is NOT the case with Android 10, so whatever device you are connecting to the phone’s Wi-Fi hotspot has to separately connect to a VPN. I bet this is by design on Google’s part, all the better to surveil you.

[edited] I’m seeing the VPN connection drop a lot. Not sure why. I’m using OpenVPN in exactly the same way as I do on my Librem 15v4, where it stays connected for hours.

I have to admit, I got my Librem 5 almost a month ago and I didn’t realize it could do hotspot. In my defense, the setting to turn it on is a little hidden in the 3 dots menu of the WiFi. I think having a larger toggle to turn it on or off would be beneficial.

So how in blazes did you get your phone to do ANYTHING with T-Mobile?

And I’ve already been sent a replacement modem…no good.

That’s really weird because I am using it on T-Mobile too. Everything was automatic once I inserted the SIM card.

I just popped in the nano-SIM card I had on my previous Android phone. Cell calls and data worked. In the Settings app > Mobile, I did have to toggle “Mobile Data” to turn that on. I found US T-Mobile settings for data and MMS and used those settings with one exception: I chose “Network Mode” as “3G, 4G (Preferred)” because there is no 2G on T-Mobile as far as I can tell, and they gave me a new nano-SIM card a couple of months ago because they said they were going to be dumping 3G. So I might try “4G Only” to see how that goes, but I did notice “3G” appeared on the status bar once.

I also had to edit the settings in Chatty so that MMS works, though when I get an image, it does not show up inline in Chatty. Instead there’s a link to where it got downloaded to a buried folder in ~/.local/share/chatty

I just tested the Hotspot of Librem 5.
In the GUI as security type it is stated WPA and it is not clickable to edit.
I would definitely want to achieve WPA3 or at least WPA2.
Could somebody give me hints on how should I proceed to get to the more advanced settings?

I would think its a given that its WPA2. Does the device connecting to the hotspot tell you what it is?

I want to get to the full settings. I am not getting a Linux phone in order to have a worse WiFi security than a modern Android/iPhone so I will never be satisfied with WPA2.
WPA3 when it is in a WPA3 only mode has not been cracked yet, while WPA2 is crackable. Only the WPA2/WPA3 combo mode has been cracked by downgrading to WPA2 which is not possible when you use WPA3 only mode.
And I have seen WPA3 working on old hardware as well.
I flashed a more than 5 years old Archer router with OpenWRT and after loading the right packages WPA3 was working on it without a problem.
So honestly, I really really really really want to see WPA3 on Librem 5.

Does anybody knows where to find the config files that gnome creates for setting up the hotspot?

Edit: I found it. It is in:
/etc/NetworkManager/system-connections/Hotspot.nmconnection

Edit 2:
I used nmcli to create a new hotspot from the cli.
Unfortunately it does not work. I can start the hotspot using nmcli, but WPA3 capable devices can’t establish a connection.
Does anyone knows if I miss some settings or if some are wrong? 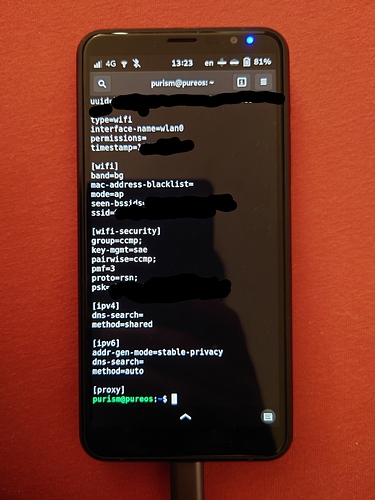 I used as group and pairwise ccmp as this seems for me to be the correct one for WPA3.
pmf = 3 to enforce pmf. This is a tricky one because 1 is NOT “yes” but it is on the contrary -> disable pmf. So be careful with this one.
psk seems to stay psk even when using WPA3. In wpa_supplicant on the contrary it changes to sae_password.

P.S. editing the files without going through nmcli does not work. The network manager overrides changes not made using nmcli.