MUA application on our L5

The picture in https://shop.puri.sm/shop/librem-5/ shows a mail icon … what MUA will run on the L5?

That’s the icon for Geary.

Thanks for this hint to Geary. I have installed the most recent version (0.13.3) on my FreeBSD laptop. It’s a Gnome application. I have here a screenshot from my desktop: 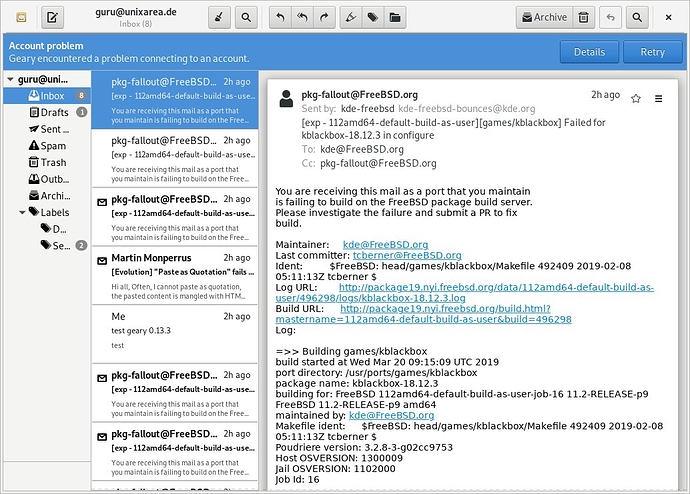 Are there any screens available, how this looks on the screen size of the L5?

The only mail client listed in the list of mobile GNU/Linux apps (https://mglapps.frama.io/) is Kube.
Likely, Geary is not adapted (yet)?

I haven’t counted them exactly, but games seems to be the largest category in that table, a fact which makes me worrying

I also noticed that Games is the biggest category.
But it absolutely does not worry me.
For one, because the next biggest category is Chat (6), followed by Web Browsers (5) and File Browsers (4).
I consider that plenty. And even rather unexpected things like banking and globes & maps are already there.

Then also, a certain kind of games (like fullscreen point n click) is easily adapted, or does not need any modifications at all. So it is not surprising there are already quite a few.
The other apps one might be still missing either need a lot of adaptation or even don’t exist yet at all.

And while one browser is really sufficient, many people would not say the same about games.
So, if the basic needs, browsing the web and files, making calls and chat, store contacts and passwords, 2FA playing movies and music, text edititing, terminal, document viewing and even navigation, are fullfilled, then what is missing?
Exactly: distraction when waiting for the bus, but you don’t have Internet access.
I mean… else you might end up having to talk to people around you or something…

No, seriously, how do you convince a friend that he might want this thing after you showed him that all/most basic things are there? He might think, “Okay, nice. But otherwise it looks pretty boring”.
You can say: “Hey look, here I have 25 games available already, just days after I got it. And none of them sends data to Google or shows annoying ads.”

Also, if you look at it from a different perspective: Purism promised about 5 essential apps.
104 (as of today) minus 24 games: 80 apps!
I consider that to be a pretty impressive number, 3…6 months before general availability.

The only apps I really will miss are Threema and the app to manage my prepaid mobile card. As those are rather exotic, those are the reasons why I’d appreciate an Android compatibility layer. For things that will probably never exist as native apps.

For me a good MUA is one of the most important must have app. Canonicals UT had Dekko which was already near to good. I still use it on my UT tablet M10.

Quick search for “ubports dekko” hints that is alive, and should thus be available on the Librem 5. Either on PureOS, or via UBports.

No, Dekko isn’t alive anymore. It was not ported to UBports, but rewritten as Dekko2. I have to use it in my UBports mobile BQ E4.5. From a user perspective it is full of regressions and far away from the usability and stability of the old Dekko. Some say that one can not call these errors, crashes and missing features (which have been there in Dekko) as “regressions” because it was rewritten. But this is a very special way of thinking. More here:

A bit triggered by a posting in puri.sm about the mobile Librem5, which is here: https://shop.puri.sm/shop/librem-5/ and which shows an icon of the MUA Geary, I installed this on my FreeBSD laptop, a screenshot is here: I'm asking, as geary is...


or this longish thread about the transition from Dekko to Dekko2:

On Canonicals OTA-15 I was a happy user of Dekko with three IMAP+SMTP accounts . Now on OTA-5 I'm using the same three servers with Dekko2. And I have so many issues now, the most anoying are: no way to save attachments no view full source of a mail...

Hi Caliga!
Thanks for your many competent and profound forum entries!
I managed to integrate the Threema communication protocol into Chatty, so at least a basic ability to send messages and smileys via Threema will be there right from the start.
Cheers,
orrence.