Came here to find out whether this was a known issue. Jolly good.

Happened to me yesterday, too. Held back due to unmet dependencies: linux-image-librem5 5.11.15pureos1~amber1 to 5.12.1pureos1~amber1
In the store, the offered update won’t go away.

In the terminal, I see:

https://source.puri.sm/Librem5/linux-next/-/issues/326 is now closed… the bug still exists for me

the bug still exists for me

I think they closed it because they think it is done from the developers’ perspective, they have fixed it and now there is just some delay until some kind of automatic build/release system does its thing so that it reaches the users.

At least that’s my impression of how the issue tracking system is used, that an issue is closed when “there is nothing more for us to do here”. Maybe it would be better if they waited to verify that the fix really works for the users, and only closed the issue after that. Anyway, let’s hope the fix reaches users soon.

Maybe sudo apt install ... would be an alternative.

I do software engineering (which, in my job, is sort of like a car mechanic for software). In my experience, your impression is generally pretty correct. You do have to understand, though, that the bug tracker is for developers, not users. Therefore it makes sense that a bug is closed once there is nothing more to be done with the code. The delay is indeed a product of testing and verification. For example, the process might go something like:

…or something similar. It makes sense that the ticket would be closed after everything is verified, but what it actually means is a fix has been accepted as “good.” That way devs can move on to other things while the bug fix moves down the pipeline on its way to users.

After several tries always the same thing.
I switch to graphic mode there it offers me to restart the phone since the phone remains stuck on the Librem5 logo.

I am good for a reinstallation.

Anyone has had success with that update? I’m waiting for a solution, as in my understanding it could lead to a system failure (seems related to this L5 Evergreen update on May 24th leads to black screen) and I don’t have time and energy to reflash.

This issue with the linux-image-librem5 should now be solved in Amber.

hi, glad to read that!

Same here (without doing anything on terminal)

Fixed for me, too.

Anyone has had success with that update?

In case further confirmation is required:

Just to add that even with the previous update the WiFi has been very stable in coming up after flipping the switch. 2 updates back it was not always coming up and some times required more than 3 flips of the switch.

So it seems that this is now very stable. Every time I turn the switch on, the WiFi comes on. Good work. Thank you.

No improvement for me. 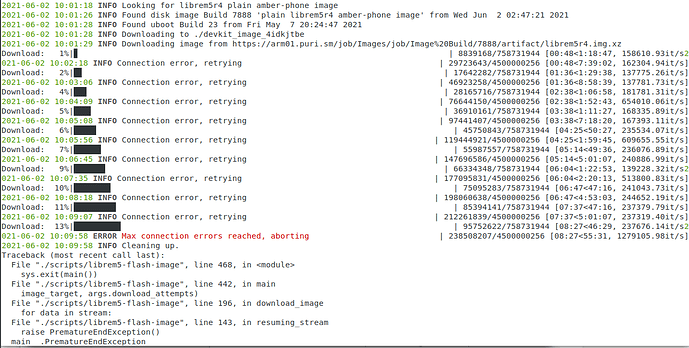 I managed to download the image with wget and then decompress it with File Roller but the script could not recognize it.