What are the specs of the Librem 5 SD card reader?

Maybe Purism is keeping the possibility open for future WiFi/BT cards that need USB, or maybe Purism thinks that people will want to use other types of cards.

Since it’s modular (removable), as far as is reasonable, Purism shouldn’t restrict what M.2 card the customer can put in (although I would suppose that anything that uses PCIe / SATA via M.2 may never work e.g. even if you could find an M.2 storage device that physically fitted, it wouldn’t work).

With the speeds I am seeing at the moment, I would be happy to see anything like realistically achievable USB 2.0 speeds, never mind about USB 3.0.

With the speeds I am seeing at the moment, I would be happy to see anything like realistically achievable USB 2.0 speeds,

It would be cool if someone would do some benchmarking of the Librem 5’s microSD, using hdparm and dd, as described in this article and this one. It might give us some idea whether the USB bus is the limiting factor. For example, if the read speeds are 15 MB/s on a card that supports 50 MB/s, then the USB bus is probably not the limiting factor, since it should max out around 30-40 MB/s.

benchmarking of the Librem 5’s microSD

I’m sorry that I asked.

The read speed shouldn’t be slower than the write speed!
The RS9116 WiFi/BT on the L5 also has slow speeds. I wonder what is the bottleneck.

@amosbatto, here is another proposal (please check it), slightly changed, for microSD I/O performance testing on Librem 5. Only important thing before executing commands is that those need to be inside related (present) directory/partition (and for some kind of consistency my SDcard was formatted to ext4), therefore as first:
cd /media/USER/microSD_path

Today I’ve used count=2048 (perhaps 4096 would be ideal), yet quicker count of 512 will do as well. Note that for test_data files you’ll need su rights to remove those (sudo rm test_XX_data).

The read speed shouldn’t be slower than the write speed!

That worried me too. The only thing that I can think of is that hdparm -t is a rather short test (about 3 seconds?) for read, compared with dd for the write, which under the specific test conditions was about 20 seconds. Maybe 3 seconds is too short to give an accurate result in this case. I couldn’t see any way of asking hdparm -t to read more data.

The conclusion seems to be that the read speed is severely hampered by something in the Librem 5, when the card itself is seen to be capable of close to the advertised speed (100 MB/s for my uSD card).

Maybe 3 seconds is too short to give an accurate result in this case.

If we’re talking about the SD card, then results of tests that take such a short time will likely be skewed by the latency of resuming the reader from power saving mode.

are we talking about a LUKS encrypted microSD card here or is it left unencrypted ?

Well, whatever is the bottleneck on the Librem 5, the PinePhone is similarly limited in its microSD speeds.

I expected much better performance from the PinePhone’s eMMC. The read speed of eMMC 5 in other phones can be as high as 400 MB/s. I would be very grateful if someone would do speed tests on the Librem 5’s eMMC as well.

are we talking about a LUKS encrypted microSD card here or is it left unencrypted ?

Definitely unencrypted in my case.

I would be very grateful if someone would do speed tests on the Librem 5’s eMMC as well.

Unfortunately not blindingly fast either.

Unfortunately not blindingly fast either.

Did you do a test of the L5’s eMMC (the internal Flash memory) as well?

Yes. The last post was a reply to the earlier post, which contained the test of the eMMC drive.

Anyway I redid the test of the eMMC drive. So the new last post has the results: [MyL5] Australia/New Zealand

So the PP is faster on the read and slower on the write than the Librem 5 - but not a dramatic difference in either case. Neither of them is blindingly fast. Also, I don’t know whether the eMMC drive is directly comparable between the two phones.

Thanks @irvinewade and @Quarnero for doing the testing. I added your results to the wiki: https://source.puri.sm/Librem5/community-wiki/-/wikis/Benchmarks

Also, I don’t know whether the eMMC drive is directly comparable between the two phones.

I wonder what is causing the Librem 5 and PinePhone to have such slow storage.

Sequential read and write performance of eMMC drives in MB/s, according to their data sheets

I’ve replaced (myself) the default 2GB/16GB mainboard (it was special offer, limited and now out of stock), meaning that above measurement was done with upgraded 3GB/32GB version. But please give me few days and I’ll test, benchmark R/W performance with the Pinephone 16GB eMMC variant (probably quicker) as well.

Actually, thanks for putting things together! I’m simply able to get much better overview (of so many technical things).

I added your results to the wiki:

Minor correction: In the Wiki you say that read speeds were tested using hdparm. That was initially true. However that gave even more woeful speeds and @ dos pointed out that, because devices may be sleeping on the Librem 5, you need a longer test to make the time to wake-up less significant - and there doesn’t seem to be an argument to hdparm to control how much data is moved in the testing. So I did the tests again on the Librem 5 but using dd for the read test i.e. dd was used for both read and write.

However I didn’t retest the uSD on the x86 because I only have one card (of that spec) and that would mean shutting down the Librem 5, opening up, …

That does mean my presentation of results is not as clear as it could be, so confusion is inevitable.

So I did the tests again on the Librem 5 but using dd for the read test i.e. dd was used for both read and write.

I updated the wiki to indicate that the benchmark is dd instead of hdparm.

I expected much better performance from the PinePhone’s eMMC.

Therefore this time I’ve copied Phosh image for the PinePhone to the same HP mx310 UHS-I microSDXC card (sample one as provides solid R/W speeds), which I decided to use in order to evaluate the PinePhone (by charging it with cca. 1.792A/9.155W) 16GB (but not today) and 32GB eMMCs R/W performance:

@amosbatto, as obvious, with today’s 32GB eMMC R/W speed performance measurement on PinePhone is my first one somewhat obsolete. 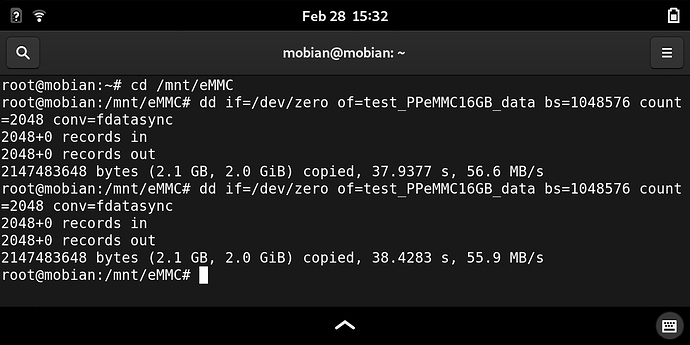 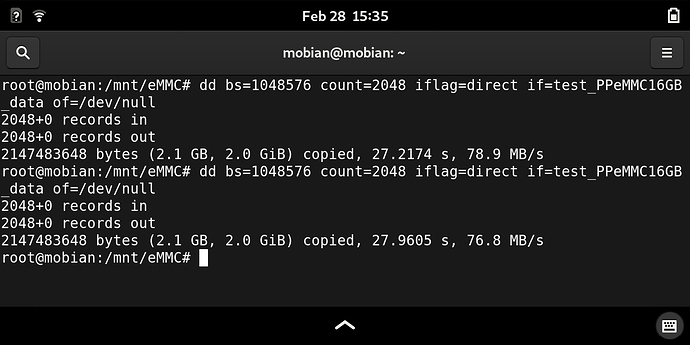 So, ultimately, what’s the fastest microSD (1 or 2 TB) to buy intended to be used only in Librem 5?
Please suggestions?

what’s the fastest microSD (1 or 2 TB) to buy intended to be used only in Librem 5?

Speed is far too low for buying based on speed. Buy for capacity, reliability, price.

There is a small risk that the woeful speeds are a consequence of some missing code and that speeds will magically improve in the future, and that would make my statement incorrect.