what i mean is this. i’ve used VLC and MPV on the DESKTOP before but maybe some people haven’t yet.

another one. ‘graphics acceleration’ < how exactly will this feel as an improvement over the current state ? i mean what state ? i don’t even have a friggin’ phone (L5) yet now do i ?

Here’s a comparison of “with current graphics acceleration” vs “without” 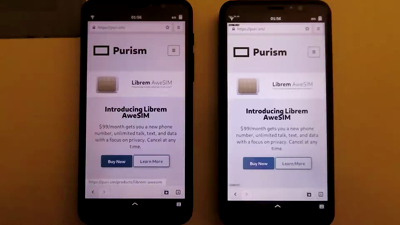 Attached: 1 video Thanks to @exalm@floss.social taking care of Webkit's packaging, Epiphany's GPU acceleration can now work on the #Librem5! Before (no acceleration) and after (GPU accelerated):

Seems simple enough to me. Click what you want them to focus on, then choose an amount to donate. Done.

As far as what they’re going to turn their attention to FIRST, I don’t think they know yet because this only just started today.

Agreed, we need to know what each app is. “Password Safe” for example… What app is that exactly, where can I read what it does, what file format it uses, etc?

Also, how much of each donation is going to Purism vs going to the developers?

Raises a lot of questions:

“Password Safe” for example… What app is that exactly

Maybe this: https://en.wikipedia.org/wiki/Password_Safe however, as you say, we are left to guess.

no email app? no web browser?

Based on what I have read, it looks like all the basics will be available out-of-the-box (on the product info page, it says “Upon initial shipment of the Librem 5, it will offer the essentials: phone functionality, email, messaging, voice, camera, browsing.”), and I think that a lot of the apps on the fund page will also be available. The fund page seems more like a ‘help us improve these apps’ than a ‘help us develop these apps in the first place’.

For some of the apps (social media, google products, more mainstream apps) I would imagine that there is currently nothing at all, so any money spent will be put towards the development. For the others, the money is likely put towards improvement. Assuming they get a reasonable amount of funding, I would be surprised if the majority of the apps don’t wind up hitting the phone eventually.

At the same time, I don’t really think anyone is buying this device for feature-parity. If you really need feature parody, you should probably wait at least a few generations. This is basically linux phone v1 (I know there were some before, but this is the first that I would truly consider daily-driveable), and just as with iPhone and Android v1, we are seeing poor 3rd party app support, and low adoption rates. Let’s just all hope that there are enough to get app developers to notice us.

Welcome to the Purism community!

Maybe the app already has enough functionality for my needs and more features would just be bloat. Or maybe not.

Maybe the app already has enough functionality but it has rough edges and/or bugs, and could use some more love. Or maybe not.

The “help us develop” is clearer. If Purism is setting the expectation that the app will not come from Purism without an indication that people are interested, and dollars pledged to show a commitment to that interest, then that makes sense.

An app can of course come from the community if people prefer to show commitment that way.

I think you mean feature parity. Or maybe you really do mean parody.

Still, I am not expecting a mass of apps at Day 1. I am realistic about where the phone will be at Day 1.

I completely agree. This page clarifies things a little bit.

I think you mean feature parity .

I fully agree, the description of the campaign somehow lacks a bit detail. Also, there are many apps listed, which are actually developed by external developers (e.g. Pure Maps). How are those funded? Does the campaign fund Purism and purism employees help with the development (or provide hardware) or is the funding forwarded to the developer? In case it funds Purism and not the main developer, it should at least state this and provide a link to the main developer as well. Otherwise I would find it misleading…

Why Fractal is not on the list? It’s a native GTK Matrix client whereas Element is a web or Android app.

First of all I think it’s cool that purism launched this idea.

What I don’t understand or what might be improved still is:

Seeing the priority after the first day I think the outcome it pretty good.

“Upon initial shipment of the Librem 5, it will offer the essentials: phone functionality, email, messaging, voice, camera, browsing.”), and I think that a lot of the apps on the fund page will also be available. The fund page seems more like a ‘help us improve these apps’ than a ‘help us develop these apps in the first place’.

The support folks have been busy compiling a list of apps and third party apps that should give an idea of how well various apps are working and what more needs to be done to them. It may also help people decide where developer attention needs to be focused.

Because it is nice, but in my opinion in the light of the goals of Purism not ready.

A “ready” app has not its place in this program as I understand it.

My proposal: let’s get the phones delivered, see what works on it. Then see the apps delivered with it. Anything crucial missing? Let convergence play. Then there are all these linux programers out there. And at the end: third party developpers should be allowed to close the gaps and sell their solutions in the purism app store.
And Purism should rather work on their hardware than launch such kind of fund raising campaigns. I am confused.

Is it a mistake that WhatsApp has a blue point (native) instead a red point (external) ?
Does it really mean we have the source of an WhatsApp client ?
Or does it mean the protocol between WhatsApp Client and Server is documented somewhere ?

I’m a bit torn. I like the idea that I could direct support to a good cause but at the same time it’s not done in a very clear way. Some of my questions were made by others already.

And how do I get a new feature on the list (not quite app)? I want to pay for “Malform” advanced login options and could also give money for location obfuscations layer (user defined “noise” on how accurate the location info is). These are more like phone features (also add a new category specific for security enhancements - it kinda used to be a priority to Purism)?
Also, I can apparently only get a suggestion done after I pay (?) which makes it a bit hard to campaign for it or prioritize.
More suggestions: https://f-droid.org/en/packages/eu.faircode.xlua/ and MAT https://tails.boum.org/blueprint/doc/mat/ (with GUI/CLI of course). Camera app in general but with some pro features?

I like this (don’t get me wrong on account of my previous message) but should these be separate pages? In that, I’d like to vote separately on the priority and such and place money separately. There may be some apps I don’t want to support and see as wasteful or may want to prioritize by category or app type (like, there are several apps that do similar things and advancing any of them is good).

Because it is nice, but in my opinion in the light of the goals of Purism not ready .

Well, that’s exactly why I want to support it! Most of the items in the list are not ready, that’s why you are supposed to donate money to them!