True but we should not confabulate new tech with design choices invalidating tech. There is no reason why a phone that isn’t paper thin, has user replaceable parts, and items of convenience can’t still be pushing the tech envelope. Absolutely none.

If the Note series from Samsung would have stayed true to its roots, I’d still be using one today. Alas, a smart phone that costs a grand, and will have sucky battery life after a possible mere 18 months is not even close to being worth it no matter how nice the wacom digitizer screen is.

The old goes away

does it ? to me it seems they move forward in parallel never substituting each other …

So the saying goes, but you know what I mean

Not sure what you guys do to your batteries that they suck after 18 months.
The batteries on my 3 year old phone, which I charge daily, are still great.

This doesn’t mean I advocate sealed batteries. However, the argument you have to get a new phone after two years is moot IMHO. It’s a conveniemt excuse to get a new one though.

There are many things that contribute to batteries loosing their abilities to hold and output a charge. Over the years improvements in battery tech made some of these things take longer to manifest, but the point I am trying to make is that, irrespective of the time it takes for a battery to degrade, it does. Just like how a laptop bought 10 years ago will still work fine today, a cell phone outside of radios is largely in the same situation. If the battery is sealed this means the phone is built and designed to be obsolete and discarded in a set period of time.

This is the practice I’m very much opposed to. Especially when some high end phones cost over $1,000.

It will depend a great deal on the design of the device, on the usage pattern, and even vary from one device to another within the same model. The number one killer of li-po batteries is heat. They degrade quite rapidly above about 60C.

The last laptop I made the mistake of buying was designed to keep itself below about 80C, thermal throttling if needed. The battery was located basically right next to the hottest part of the chassis, so cooked itself quite nicely. It was actually a brilliant design, since it took almost exactly 13 months of fairly heavy use to cook the battery enough for it to bulge enough to cause damage to the rest of the system. The warranty, of course, was 12 months.

This is the practice I’m very much opposed to. Especially when some high end phones cost over $1,000.

I agree with this. Imagine a phone that is still valued as a daily driver at 5 years? I have a hard time imaging such. Like with you and your Samsung, I had a hard time with my iPhone as 36 mos. It struggled to keep up even though I’m fairly minimalistic in my app choices.

Technology is an exercise in mimesis as much as it as an exercise in utility - particularly when one discusses connective technologies in contrast to constructive or functional tech. If a vendor can weave into the supplier-buyer relationship a concept of, “People like us use things like this” and reinforce it with a forced march then revenue forecasts have greater accuracy, marketplace churn is reduced, and overall spend is likely increased.

These choices have bite back, no doubt.

The last laptop I made the mistake of buying was designed to keep itself below about 80C, thermal throttling if needed. The battery was located basically right next to the hottest part of the chassis, so cooked itself quite nicely. It was actually a brilliant design, since it took almost exactly 13 months of fairly heavy use to cook the battery enough for it to bulge enough to cause damage to the rest of the system. The warranty, of course, was 12 months.

This raises a fascinating question. Will the L5, due to a combination of component limitations and heat output, need something like thermal paste to really sing? This is a Gen1 device, so hacks like that might aid its lifespan and usability. I wonder if this has been explored? I wonder if I’ve missed a thread about that.

Some of my phones held charge pretty strong in a year to year and half after. Some were crapping out after 4-6 months.
There are many factors, but most important ones are the way we charge and heat. Draining battery to minimum and topping it at 100 will get you to drop in capacity fast especially with heavy use. I lost 30 % just in 5 months on one and 1% on another after over a year. And if the battery stays hot for long periods will drop the capacity even more and faster. Just ask Nissan Leaf owners from Australia. no liquid cooling (til the last Gen) and hot weather, perfect recipes for “premature” failure or extreme capacity loss in relatively short periods for a car.
Modern phones with air tight glass back are perfect for keeping the battery warm at most times and hot at any moderate to heavy use. No room to dissipate the heat and glass is better at generating the heat than dissipating.
So, people rightfully ask for replaceable batteries. Or at least better housing designs and software as well. Most of the electric cars now are focused to charging limits and some go as far as certain % away from use for the sake of longevity - warranty protection.

I think that is a large part of what motivated flipping the CPU to the other side of the board after the alpha batch. Having the screen get warmer won’t significantly decrease its lifespan. Putting the CPU closer to the screen and farther from the battery will hopefully reduce the damage to the battery from overheating. A vapour chamber and heat pipes might not be a bad idea, but they’d be a tad expensive I think.

Perhaps the Librem 5 should have a way to set the software to have the battery charge more slowly. Battery charge limits are important, if not even more so; I set mine on my OnePlus One to 80% using the app on F-Droid to make my battery last longer.

@bluez, My experience has been the exact opposite. Every laptop that I have ever owned (mostly Thinkpads in the last 15 years) have had significant battery degradation after 2 years of usage. By the third year, the battery was only good for about 30 minutes of use.
For phones, the degradation hasn’t been nearly as bad, but I rarely use my phone more than 20 minutes per day. Some people use their phones 6 hours per day and have to recharge their phones every night, so they probably do have the same degradation as I see on my laptops. My girlfriend had to throw away her last phone (Huawei) because the battery got so bad that she could only turn it on if it was plugged into the charger.

Only 6.2% (26 out of 418) of the smartphone models introduced in 2019 had a replaceable battery according to the gsmarena database, and only one of those 26 models have a Snapdragon processor (the Moto E6 with a Snapdragon 435). Considering that the world makes 1.8 billion cellular phones per year, I can’t believe that there isn’t enough demand for at least ONE mid-range or high-range smartphone with a replaceable battery. 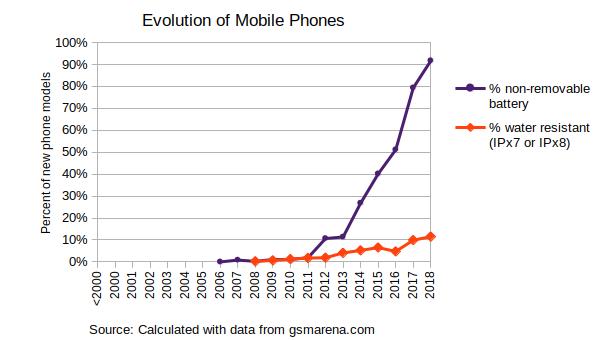 The only way that I can explain what happened is that the entire mobile phone industry decided to stop producing high-end mobile phone with replaceable batteries in 2016, because it realized that mobile phone sales were going to start dropping and planned obsolescence was the best way to force consumers to keep buying new phones.

Average number of months before users upgrade their smartphone

I wouldn’t get so mad about this if it didn’t have severe environmental consequences, but all this needless fabrication of electronics is depleting the world’s reserves of vital metals that have a limited supply and it is generating greenhouse gases, since 80% of total emissions for smartphones occur during the production phase.

I had an MP02. The hardware is nice, very solidly built. I ended up returning it though, because:

I have the feedback I wrote them detailing the bugs if anyone is interested in seeing if they could put up with it before buying.

As a “basic phone”, I am now using the Light Phone II. It also is using a minimalized version of Android, but Light did a much better job of it than Punkt did.

@dc3p hey ! thanks for the link ! if it had a physical qwerty keyboard like my bb-q10 it would have been PERFECT !
will they open up the design to the public later like Purism plans with the L5 ?

I loved my BlackBerry, too. It’s been sad to see BB sink into Android obscurity. I got one of their Android-based devices and found that they still have all the dial-home googleybits in them.

As for the Light Phone: I hope they will, but I doubt it based on their track record there. They croudfunded the original Light Phone and the LPII. They did not open the software or hardware on the original. They have been very open about progress, hurdles, etc., and they have published the basic specs (fish around in the Indiegiogo).

I did find this write up on LightOS that provides some insight into their methods, but it isnt source.

I asked their support team about open sourcing the project specifically, and was told “we are a small team still working on the roll out. This is something we will consider once things settle down.” Considering it shouldn’t take much effort to put the source on GitLab or GitHub, or simply to open their git repo up, I’m not holding my breath on it being opened up.

Perhaps I will get a dumb-phone with a long battery life and keep it on all of the time to receive calls and text messages, while keeping the Librem 5 turned off except for when I need to use it.

This has been more or less my plan from the beginning, in anticipation that the Librem 5 would probably not be “ready” on first release. I will just continue to use my existing dumbphone. Having not previously used a smartphone, I won’t miss having smartphone functionality in my pocket.

Since my usage is low, I’m on a pay-as-you-go tariff (my monthly cost is below the lowest pay-monthly deal). This means I can have a SIM card for both devices (i.e. two SIM cards) at no extra ongoing cost. This might change if the Librem 5 encourages me to use more data, but it’ll do for a starting point.

I probably won’t be thinking of the Librem 5 as a tool that I always carry with me. It’ll be more like my laptop: something I bring with me only if I think it will be useful to have it at hand.

Regarding battery life, my experience is that the biggest killer of lithium chemistry batteries is letting them charge to 100% and the second biggest killer is high temperature. (Both already mentioned in this thread.) So, I, too, will be looking for ways to limit the charge level of the battery.