Building and running Signal Desktop on the Librem 5

Here is the story of my efforts to try out Signal on the Librem 5. TL;DR: a bit messy to install, but it does work, to some extent.

A lot of this is based on https://github.com/BernardoGiordano/signal-desktop-pi4/blob/master/install.sh but modified as needed.

This is about the “desktop” version of Signal, the idea being that the Librem 5 is like a regular computer (not Android and not iOS) and therefore the mobile Signal app cannot be expected to work (because that is only for Android or iOS), however Signal Desktop can work.

It is a little tricky because the usual version of Signal Desktop is for the x86_64 architecture, while the Librem 5 has a aarch64 (also called arm64) CPU so we need a aarch64 build of the program.

A word of warning if you are going to try this: the instructions here are my best attempt at putting everything together after getting it to work, I might have missed some part(s). Let me know if it does not work for you, then I will try to add any missing pieces.

Starting from the build instructions at https://github.com/signalapp/Signal-Desktop/blob/development/CONTRIBUTING.md that says “First, you’ll need Node.js which matches our current version”.

Node.js is some large javascript thing which I am not very familiar with, but it turned out that it is straightforward to build, it only takes a long time.

After that, we can check it by running node --version which should output the version number “v14.16.0”.
Now the Node.js stuff is installed in /usr/local/bin/node so we can remove the ~/node directory to free up some disk space.

Apart from Node.js another thing we need is the RingRTC library built for arm64. Building that seem to require very much disk space so it the build would not fit on my L5, I resorted to building it on a x86_64 laptop running Debian 11, as follows (mostly taken from the “ringrtc-linux” part in https://github.com/dennisameling/signal-native-deps/blob/main/.github/workflows/build.yaml):

Now, back on the Librem 5, prepare some things we need for the Signal build (most of this comes from https://github.com/BernardoGiordano/signal-desktop-pi4/blob/master/install.sh):

Now we can get the Signal-Desktop repo and build it:

This gives the “signal-desktop” executable in Signal-Desktop/release/linux-arm64-unpacked/signal-desktop and we can run it from there. What I did was to create a small wrapper script with the full path to the executable and then put the wrapper script in /home/purism/run and then open the terminal app and run it as ./run and then Signal starts. First it showed the QR code to link to a “primary mobile device” (because Signal folks decided that only Android or iOS can be “primary” devices, silly but that’s how it is). I linked to an Android phone and then could communicate back and forth using “note to self” in Signal. It looks like this: 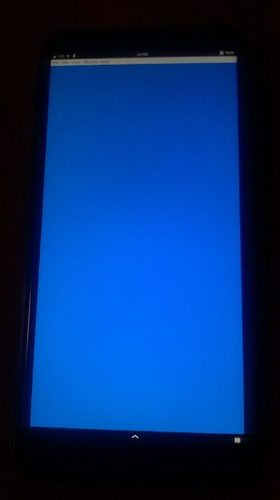 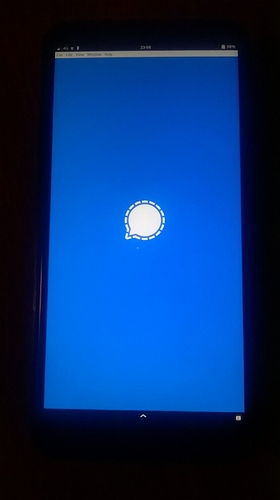 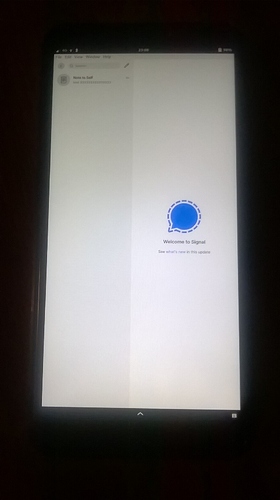 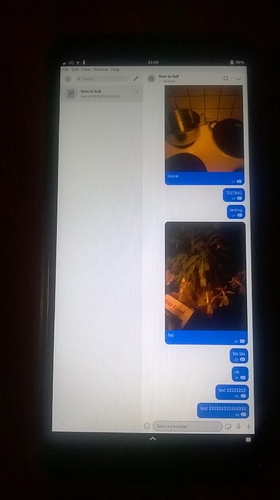 This was after changing the display scaling setting in phosh to 100% (meaning double the normal screen resolution), otherwise it does not fit very well. I suppose one possible quick-and-dirty fix for that would be to simply reduce the width of the left panel which otherwise takes almost the whole screen width, but I did not try that yet.

The build procedure above is unfortunately quite complicated, but it’s the best I could come up with at the moment. If you know a better and/or easier way, please comment.

Loved. Then unloved. And then loved again so I could love it twice. Great job! Can’t wait to try it!

Guess it might defeat the purpose (not desktop Signal client), but if you wanted to try another method Waydroid + Signal has been reported to work on the PinePhone so I don’t see why it couldnt on the Librem5 - https://github.com/waydroid/waydroid

This also looks interesting if you like the terminal and don’t need all of Signal’s features (has not implemented them all yet) - https://github.com/boxdot/gurk-rs

Thanks for testing @Skalman
I am also impressed how far waydroid has already come. And that it can run that good on a (low powered) pinephone.

Being able to use some android apps will make my L5 a daily driver from the start.

because Signal folks decided that only Android or iOS can be “primary” devices, silly but that’s how it is

Well, I guess what they want to express is that you need a SIM. Maybe the desktop version can be tweaked in that direction. (Or someone builds a monstrosity that runs the Waydroid version automatically in the background only to enable the desktop version

I tried to follow your guiding, but it stopped at the start because this was missing:

Now it is compiling with make -j2…

With arm64 becoming more common in laptops as well (PineBook Pro, new Apple MacBooks), I’m hoping that Signal upstream at some point provides arm64 builds themselves. This is great in the meantime though.

I was reading in advance through your guide about the RingRTC library … I have no Debian system to build this (only FreeBSD and Ubuntu). In the L5 there are 22 GByte free, isn’t this enough? If not, can you share this lib somehow for the L5? If not, I could stop the 5 hour building of node.js

Guess it might defeat the purpose (not desktop Signal client), but if you wanted to try another method Waydroid + Signal has been reported to work on the PinePhone so I don’t see why it couldnt on the Librem5 - https://github.com/waydroid/waydroid

Sadly at present waydroid does not work on the Librem 5. Just tested this morning. Causes the gui to lock up. https://github.com/waydroid/waydroid/issues/158

I’ve found the axolotl arm64 build for mobian to work reasonably well for my own Signal needs. The QT UI isn’t ideal and has some quirks (in particular with different QT apps fighting for keyboard input sometimes) but it does work and does fit.

Thanks for testing, I hadn’t seen a lot of discussion over it with the Librem5 - I know others will appreciate your link!

I’m now stuck in this:

Which pkg provides this gclient?

Which pkg provides this gclient ?

It’s part of something called “depot_tools” which I forgot to mention, you can get that by cloning https://chromium.googlesource.com/chromium/tools/depot_tools.git and then add the path to your PATH env variable. I don’t know if there is any debian package that provides, maybe there is, probably something related to chromium development then because depot_tools is according to the readme file “Tools for working with Chromium development”.

For me, 22 GB did not seem to be enough, but you can always try. You could also try adding extra storage to your L5, either put in a microSD card or attach an external USB drive and do the build on that disk space.

If not, can you share this lib somehow for the L5?

I could, but I’d like to avoid it, from a security perspective we should avoid using random binaries shared by random forum members such as myself.

The make fetched with a lot of git processes for some 3 hours some 10 Gb of sources before starting compilations. I stopped it and will look for an external disk.

With the external disk the problem will be the supply of power for that many hours of download and building. Does the make allow to interrupt w/o starting from scratch again?

I thought again and better and will not proceed with building signal from 10 Gbyte sources from Google from which nobody knows what it might contain.

Signal is not good program if you are trying to use de-googled phone. The last time I tried to side-load the apk file it refused to start because I didn’t have Google-play services running.

The last time I tried to side-load the apk file it refused to start because I didn’t have Google-play services running.

I’ve got a LineageOS 18.1 de-googled Pixel 4a running signal app no problem since it uses MicroG instead of GAPPS which is the simple solution.

Dont have a screenshot but on my last phone with all the Google apps disabled via ADB the Signal apk (official download) gave me a popup that it would still try to use Google Play Services since it was detected.

But this fails to install: