Ghosted with no refund for phone - do not trust this company!

Purism is an untrustworthy, unreliable and dishonest company from my personal experience - never sent me the phone I ordered, and has ghosted me and still not given a refund after over a year of numerous attempts to contact and escalate to the managers! This is fair warning to not buy from this company!

At first I was told it would only take about 2 months from the date of order to ship. Then, in November once I inquired again wondering why it hadn’t arrived, I was told it would actually take up to a year. Since I didn’t want to wait that long, I requested a full refund at the end of January and was told my refund request was submitted to the finance department. As stated in their return policy they offer full refund if you want to cancel an order before the item has shipped.

It has been over 7 months since I requested a refund and was told it was submitted, in that time I have contacted them numerous times asking when I can expect the refund, and was told nothing other than they needed more time to process. After almost 4 months on May 13 I asked if I could be put in contact with their management, and one of your employees responded that he had forwarded my request to management to escalate. I heard nothing back. On June 16 I said that I would file complaint with the BBB if I did not hear anything back or receive my refund. I filed a complaint with the BBB, the BBB tried to contact Purism twice with no response. I have now filed with the FTC, State Attorney and Department of Consumer Affairs and hopefully will be able to receive the deserved refund.

you only ordered yours last year. Buddy I ordered mine 4 years ago and still haven’t gotten it yet… with multiple attempts. Good luck

Marc I was told my refund request was filed over 7 months ago. Why do they lie constantly about their projected shipping times and then not process refunds when a client decides they don’t want to wait years?

Thank you for sharing your experience. Then I guess we will have to order a device fulfilling the criteria from another company:

Now that we know that Purism delivers their devices with a huge delay and does not do the refunds in reasonable timeframe, we can go and buy an alternative product.

Oh wait. There isn’t any.

I studied Purism for years and after studying the delays I went the secondhand market route and found someone who was selling their evergreen model. Hope they can get everyone lined out eventually by the end of the year. I cant speak much for the refund dynamics, its definitely the most far left field issue Ive ever heard of, but all I know is I still wanted the phone.

@samruthsky,
Customers who pre-ordered the L5 before Feb. 2020 have legitimate grounds to file complaints against Purism with higher authorities when it doesn’t pay out immediate refunds, since it retroactively changed its refund policy to pay when reaching the order in the shipping queue, but you aren’t in that group of customers. I can sympathize with your frustration, but I don’t see the basis for you filing complaints.

It is important to understand that no big tech company with a lot of resources is going to invest in the development of mobile Linux after witnessing the string of past failures, and it is very unlikely that angel investors are going to appear to dump millions into a mobile Linux startup, so there are really only two options. Either pay for no software development and just sell hardware (which is essentially what PINE64, F(x)tec, Volla and Planet Computers are doing) or try to crowdfund the necessary software development which is what Purism has been doing. By its very nature, crowdfunding is risky for the customer, and the product almost never arrives on time if it arrives at all. Look at the history of the Ubuntu Edge (cancelled), Jolla C tablet (bankruptcy and crowdfunders never got refunded) and the Neo900 (cancelled) for examples of what can happen.

Over 20 companies have failed at commercial mobile Linux in the past and many of them were much larger and had far more resources to dedicate to the task than Purism, so we have to understand the challenges that any company faces when trying to pay for the development of mobile Linux. After witnessing the failures of Sharp, Nokia, Intel, Motorola, Mozilla, Canonical, FIC/OpenMoko, Samsung, Palm/HP, Azingo, Wind River, MontaVista, etc., I see this as a structural problem, which is why I give Purism a lot of credit for continuing to work on mobile Linux when other companies have given up.

People are making valid points, but they’re of no comfort to the OP, who is beyond all that, and just wants the refund he expected.

I was curious, too, so I had a look at the Wayback Machine for some September 2021 dates, and the site did, in fact, read “Shipping Now” for the regular L5. The price was $899.

Here is my receipt for anyone doubting and a response from a representative in January saying “it could take three weeks for refund process to complete”. 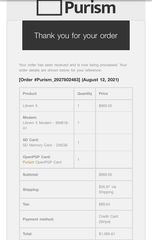 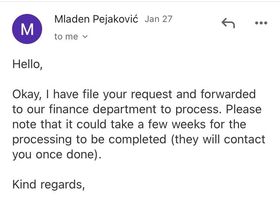 amosbatto none of what you said changes the fact that I was lied to about shipping time and refund time. And in fact your comments reinforce the fact that Purism lacks transparency with their customers.
nowhere on the store pages does or did it say that your investment is not a guaranteed purchase, and goes into Purism’s crowdfunding research, and that you may or may not recieve your product or recieve a refund if requested.
The shipping policy stated on site at the time I bought and requested my refund earlier this January was that full refunds are offered anytime up to when it is shipped. I see now the shipping policy has changed on their site to what Iwriemen mentioned.
This is a ridiculous way to treat your customers even if you are a startup company. They rightfully owe the refund.

I wish you wouldn’t keep trying to distract everyone by mentioning all the previous “mobile Linux” efforts, many of which are not comparable with each other. It also doesn’t help your point to open old wounds about some of those ventures.

Nope. The refund policy I pointed out was from the Wayback Machine Aug 12, 2021. Even in January 2021 it is the same. Your expectation of a refund sooner than all preorders shipping is and was invalid from Purism’s documentation.

This is a screenshot from earlier this year, clearly stating that full refunds are given for any order that is cancelled before it is shipped 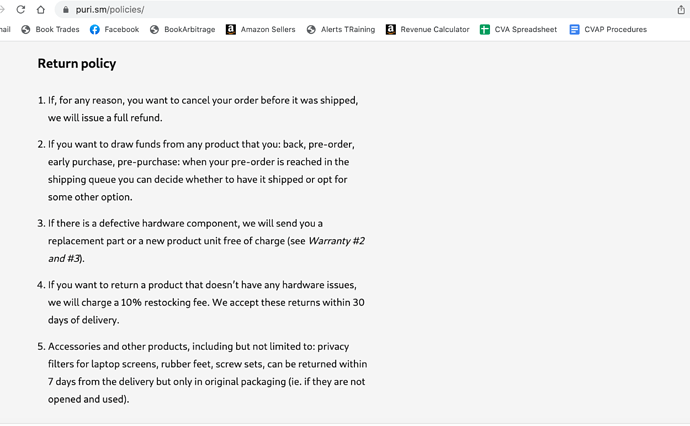 This item ordered was not a “pre-order”, as far as I was informed. When I inquired about time for delivery for this order it was given as 50-52 days, meaning it had a supposed shipping que. If all orders are considered “pre-orders” until the product may or may not arrive years later, meaning they may or may not give you your refund as stated in their policy if they continue to change their shipping time and the product never arrives, the company has responsibility for transparency.

This is a screenshot from earlier this year, clearly stating that full refunds are given for any order that is cancelled before it is shipped

Yeah, but it doesn’t say when. 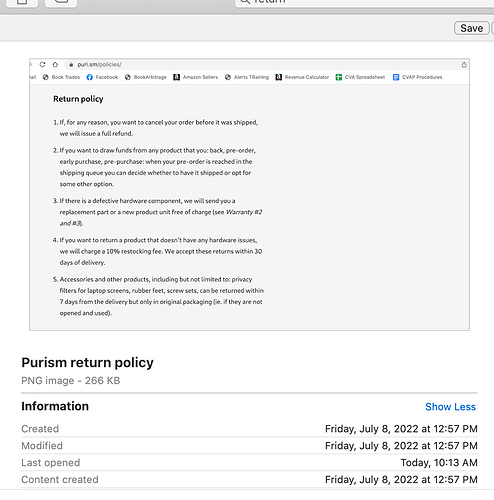 It doesn’t say when they’ll issue the refund.