This is about my attempts to make the “GNOME Maps” app work on a Librem 5 Birch. Comments and suggestions about better/other ways of troubleshooting this kind of things, are most welcome.

After installing GNOME Maps through the “Software” GUI, at first it does not seem to work, just hangs with a blank screen when trying to start it.

Starting it from the terminal shows that it crashed:

I think the warning is probably nothing to worry about, seems unrelated to the Segmentation fault crash.

Then I had the idea of trying to run it through the gdb debugger, to see where and why it crashes. However, gdb would not run it because “No executable file specified”. If it’s not an executable file, then what is it?

So the /usr/bin/gnome-maps file is a little script that starts something using /usr/bin/gjs which comes from the gjs package, “Mozilla-based javascript bindings for the GNOME platform”. Maybe it would be possible to run the javascript engine through gdb and then start gnome-maps on top of that, but I’m not sure how to do that.

My next idea was to run through valgrind, hoping that could show where the crash happens.

Maybe a bug in libmozjs-60 then?

Next idea: rebuild libmozjs-60 from source, possibly without optimizations and with some debug options.

The source code can be fetched using “apt-get source” provided that some deb-src line(s) are added to the /etc/apt/sources.list file, this seems to work (just added the deb-src line, the rest is the same as it was originally):

Now, get the source code:

That works, it downloads the source code and extracts it to a new directory called “mozjs60-60.2.3”. At this point it is possible to go inside that directory and try to rebuild the package frmo source using the command “dpkg-buildpackage -us -uc” – for me, that failed because I ran out of memory. Using fewer threads worked: the command “dpkg-buildpackage -us -uc -j2” worked, took a long time (about 10 hours) but generated new deb files that could be installed.

which could then be installed using

Then, when running gnome-maps again after that, the newly built libmozjs-60 library was used, I was able to verify that by adding some printf statements so I could see that it was really mu modified code that was running when gnome-maps was started. However, it still crashed in the same way as before.

At this point I was thinking that there was a bug in libmozjs-60 and I was aiming at finding out more about it. First I wanted to build without compiler optimizations, both to build faster and to make degugging easier. The libmozjs-60 code is mostly C++ so setting the CXXFLAGS variable might work. Apparently DEB_CFLAGS_SET and DEB_CXXFLAGS_SET can be used to make the dpkg-buildpackage procedure use some specific compiler flags, the following command worked to build with -O0 (no compiler optimization) for both CFLAGS and CXXFLAGS:

After having rebuilt the deb files in that way, and reinstalled them again, the crash no longer happened. Perhaps the problem was due to a compiler bug then, since turning on compiler optimizations should not make the resulting code crash.

It would be interesting to try building with a newer compiler to see if that helps (this was using gcc 8.3.0), I haven’t tried that yet.

When it started without crashing, it first said “Maps is offline” and would not show any map. The following command helped solve that:

Maybe the problem there was that root privileges are needed for that command but gnome-maps is not running as root. Luckily it seems enough to have run that nmcli command once, after that it seems gnome-maps is able to use the network each time it starts.

So then it was possible to start GNOME Maps and it did show a map.

I made this little video showing it running: 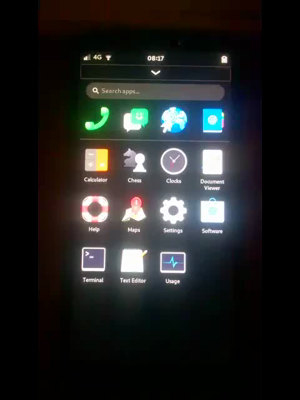 Attached: 1 video @thibaultamartin@mamot.fr @purism @gnome@floss.social Just managed to get GNOME Maps running on a #librem5 Birch. At first there was a crash in libmozjs but now, after recompiling libmozjs with -O0 -- it works! #gnome-maps

Other than that, I’m quite impressed at how well it works “out of the box”. Zooming with the buttons works, and moving the map can be done via the arrow keys on the onscreen keyboard. It draws the map fairly quickly. Searching for a place name works, although part of the text ends up outside the screen.

That’s it for now. If anyone has ideas about how to make it work better, please let me know.

Cool that you narrowed it down to a compiling issue. Where do we file bug reports for this issue?

I have never figured out how to do proper debugging with dbg and recompiling Debian packages with the debugger info in the code so it runs well in dbg. If anyone can point to a good tutorial on how to do it, I’d appreciate it.

libmozjs60 update that fixed the crash was already in Purism’s CI repo for months - https://source.puri.sm/Librem5/mozjs60. I haven’t released it yet into regular repos because it failed tests when building, and since GNOME Maps doesn’t work super well yet anyway (and since the problem will go away by itself with byzantium) I haven’t put my time into investigating it.

@amosbatto @dos It turned out that a newer version of GNOME Maps installed via flatpak works much better, and then this rebuilding with -O0 is not needed.

Here is how I installed it:

The above installed GNOME Maps version 3.38.1 which can then be started like this:

Here is a new video showing the new flatpak-installed version 3.38.1: 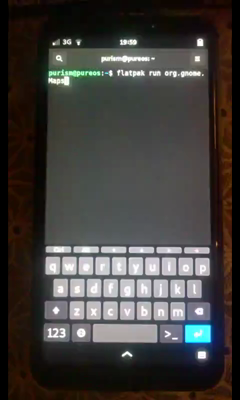 Nice! I went looking for GNOME apps to backport last week, but recent GNOME Maps needed more missing dependencies in amber than I was comfortable with

Thankfully byzantium on L5 is slowly getting usable and it already contains much fresher set of GNOME apps. Flatpak isn’t always the best answer since the runtimes there are missing some patches that make things mobile friendly, but in some cases it works well enough indeed

Yes, the flatpak version really seems to work well in this case. It uses the screen very nicely, everything fits, and it’s impressively quick to follow when dragging the map around. My only complaint would be pinch-zoom which is not as smooth as one would like, but that’s a minor thing and zooming using the buttons works fine.