I understand this will have a low priority or none as it might raise security issues with the phone itself, but I was curious if it would be a feature on the phone. Creating a internet hotspot or sharing internet to other devices.

I would think that if this wasn’t shipped with it to begin with that it is something that could be added later. This assumes, of course, that the wifi radio can function in the mode required.

GNU/Linux desktops can already do hotspots. I don’t see any reason that the Librem 5 would be any different in the long run. The setting may not be exposed for the first several years, just like Lubuntu didn’t expose settings for WiFi networks that had more than a simple password.

Thank you for the responses! Guess we will just have to wait and see

Actually, I’m using as daily smartphone the Ubuntu powered BQ E4.5 (formerly developed by Canonical, now by a community UBports.com). Its hotspot function is what I do use around 10 hours a day. It would be a show-stopper for me, if this is missing in the Librem-5.

Oh that sounds promising, I’d love to create a hotspot for my nintendo switch if I’m on the move but it’s not a dealbreaker for me I guess

I also use hotspot capability of my phone 8h/day, so that feature is important to me too. I wonder, once I imagine it’s related to this topic, if it’ll be possible to use VNC to access the desktop mode of LIbrem5 when you’re, e.g., at your workplace, using your firm’s computer.

UBPorts will be officially supported on the Librem 5. So, I think we will definitely have hotspot capabilities on the Librem 5 even if we have to install UBPorts to get it.

Depends on the wifi radio used, but hope you are right.

As the other said there should be no technical reason withe an normal wifi module + linux + debian.
And from the UI point the librem uses pureOS with Gnome wich allready suports hotspots in an easy way via the wifi settings menu.

Will probably look like this but optimised for small screens. 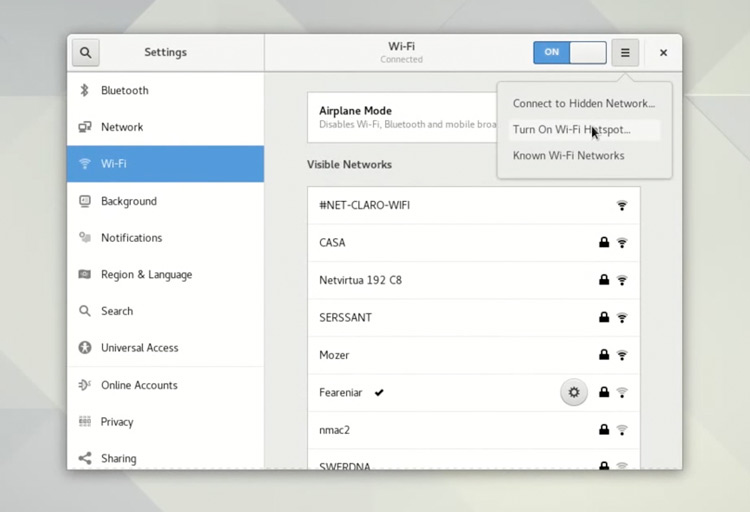 @luisfsr: In regard to a VNC server running on the phone, the problem is Wayland. AFAIK the default VNC server for the Gnome desktop called vino, only supports X (like most VNC servers). The only alternative I have found to support Wayland is still in development: gnome-remote-desktop.

What is Wayland exactly? I tried googling and just ran into more terminology I didn’t quite understand.

I’m new to the terminolgy myself, but based on my understanding of windows inner workings, and my work in graphics programming, it is the graphical backend of a linux system. Think of it like a graphics library and manager, and GNOME as the specification of that graphical system.

Sorry if that doesn’t make anything clearer, or is in fact wrong. To keep it simple, Wayland/GNOME are the graphical portion of PureOS.

@Raggelen:
I’m quite new to the display server topic as well. But a quite good overview explanation of the different terms can be found at the Wikipedia “Display server” page.

I’ll try to explain it in my own words, as much as I understand it so far (with references to Wikipedia). Please, somebody correct me if I’m wrong.

Now to our Librem 5:

Why Phosh and Rootston instead of Gnome Shell and Mutter? For a phone, a lean combination of display server, compositor and graphical shell is needed to be light on the scarce resources of a mobile device.

That’s how I understand it so far - somebody please correct me, if I’m wrong.

Hotspot capabilities would be nice - specially at first when I will have moved my SIM to the Librem5, while still using apps on my old phone.

really am hoping that hotspots will be possible. That is very important for me.

Hotspots are actually working in Gnome trough network-manager should be the same in the Librem 5.

I hope WiFi hardware support this.

According to this stackexchange post (https://unix.stackexchange.com/questions/405282/finding-capabilities-of-wifi-driver-device), running “iw list” will tell you if the hardware can work as an AP or not.

So, I booted up the ol’ dev board, loaded the wireless driver module, and ran that command. The supported interface modes list, looks like this :

So, I’m going to say, “yes” AP mode will be supported. To turn the device in to a hotspot, you only need to set up NAT based routing in order to allow the data portion of the cell modem to be shared.

Which would mean, to me, that the “worst case” scenario for making the Librem5 a “hotspot” is that you might have to install some packages, and do a little manual configuration. (Assuming there isn’t a GUI way to do it at launch time.)