My new Nexdock 360 (ND) arrived this afternoon, and (at least after only an initial glance) it interacts extremely well with my Librem 5 (L5).

Procedure I used: with L5 running & ND off, I connected L5 to ND (USB-C to USB-C), then the hit power button on ND. My custom L5 background quickly appeared on the ND, and the red LED on the L5 started blinking (indicating a charging problem). This flashing light occurs whether or not the ND is plugged into its wall wart. The L5 battery indicator shows a lightning bolt, meaning it’s at least trying to charge.

It’s still too early to firmly state the rules, but the behavior I’m seeing is that freshly-opened applications appear on the screen currently holding the cursor.

When I opened Clocks, it filled the L5 screen; I then used the ND trackpad to move the cursor to the Clocks title bar & drag it to the ND screen. The window instantly shrank vertically (no scaling change) for some reason, demonstrating what libhandy brings to the table; all the information appeared in the now smaller window. Dragging the window between the 2 screens was beautifully fluid, and acted as you’d expect with a 2-monitor setup. When I dismissed Clocks & reopened it, it resumed at whatever size it was previously. When I disconnected the L5 from the ND, then Clocks instantly moved back to the L5 screen at it’s usual full-L5-size.

The trackpad & keyboard (entering text into Terminal) were buttery smooth. I was quite pleased to find that the keyboard automatically respected my Dvorak layout.

In the shots below, you can see the side-by-side connection (merely propped up - no fancy phone holding screen attachment yet), and zoomed-in showing the Usage app dragged so it’s partway on each screen. The black water in the 1st shot is my phone’s background image. You’ll note the app’s bottom doesn’t align between the 2 screens (by more than the tops don’t align due to my slopping positioning of the L5) - I’m guessing that’s due to a screen resolution mismatch. I’m not bothered by it at this point. 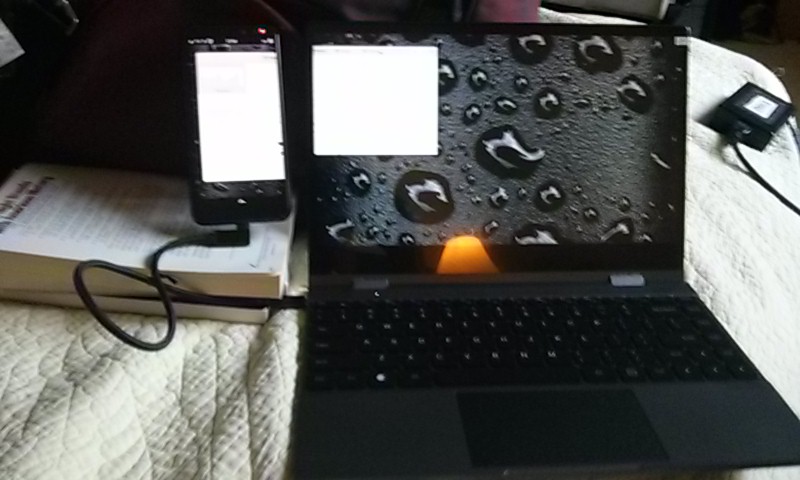 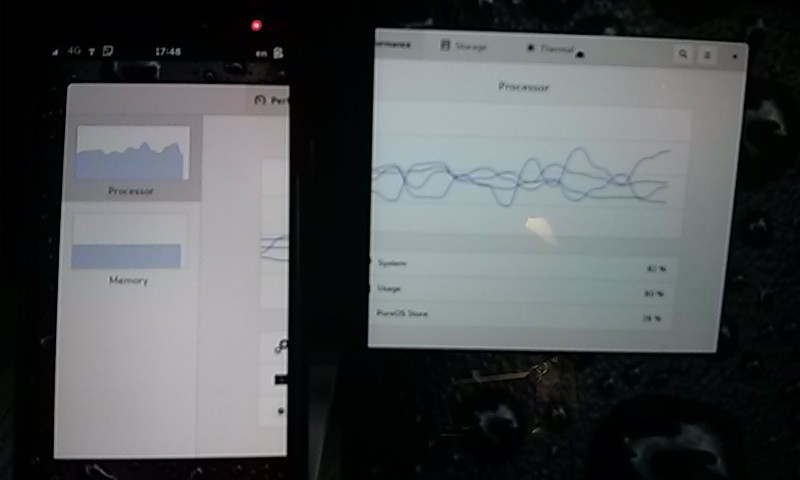 Regarding the charging problem, do you have the latest firmware? as discussed by me here: [MyL5] Australia/New Zealand

To be careful, I will once again quote: IMPORTANT: The firmware is for the Evergreen and Dogwood batches. Don’t flash it to other devices.

I would probably get a ND myself if it came with a bigger screen. What is the screen diagonal and resolution of the one that you have?

It does sound as if the convergence is working quite well!

How do I view it?

How do I view it?

I don’t have my L5 yet, but Pinephone initial screen looks great on my Nexdock.

The “software that runs the ND” is what runs on the device that is linked to the ND; that is one of the advantages of the ND. So the software on the device you attach to it, which may be an L5, PP, or other device is the ‘brain’ for the ND. That is great as when you upgrade your smartphone you in this sense also upgrade the OS/software on the ND since it is just your second display on your attached device.

The attached device just needs to have software that handshakes with a second display through either USB or HDMI video output connector.

Is the touchscreen on ND working? Can you smoothly run fullHD videos at 60 fps?

Upd: Is there any way to connect one more screen simultaneously? In such case, the L5+ND could be a real productive workstation!

I don’t know, but I think it could be argued that it does not matter so much. As I understand it, connecting a Nexdock is like connecting a USB mouse and a USB keyboard and a screen, just that they are bundled together. So while it would be great if any software it runs internally was free software, it is not critical. It does not have access to the main memory, and not any networking devices or anything.

This is how I think it is anyway, I hope someone will correct me if I’m wrong.

I don’t know, but I think it could be argued that it does not matter so much.

I don’t know either. As long as you put the emphasis on “so”. It may not be critical but it is still a worthwhile question.

not any networking devices or anything

That raises the question though about a “bad USB” attack. In theory you have blackbox hardware running blackbox firmware acting in the role of USB hub and devices - and the USB device firmware could add a spurious networking device and hijack traffic. This is a well known attack. If I had my tinfoil hat on.

Is the touchscreen on ND working?

Good question. Hopefully @laubster will report on that.

… which per your post is not the latest. I’m waiting until Byzantine to do any system updates. (I haven’t even run any software updates since the intermittent wifi connectivity issue popped up - probably around 2 months now.)

Is the touchscreen on ND working?

When Clocks is on the ND screen, no, the touchscreen has no effect. When Clocks is on the L5 screen, touches are kind of erratic: when creating a new alarm, focus seems to jump around between the fields. In contrast, using the touchpad to move the cursor and then click works flawlessly no matter which screen is used.

Can you smoothly run fullHD videos at 60 fps?

I wouldn’t know how to test that (VLC?) and/or how to determine FPS - please specify steps.

Is there any way to connect one more screen simultaneously?

I don’t see any video outputs on the ND at https://nexdock.com/tech-specs/ , so if there is a way, it’s not drop-dead obvious.

Related to the charging, with more time spent on it, I’ve found the red LED is sometimes solid, sometimes blinking. I haven’t yet noticed a pattern as to how to get it one way or the other reliably. When left alone for a while, the L5 shuts off its screen, which breaks the connection to the ND (causing it to go to its “Ready to connect” mode for a minute before shutting down). After unlocking the L5 & hitting the ND power button, things are back to normal.

I’m waiting until Byzantium to do any system updates.

Your choice of course but, technically, updating the firmware on the PD controller is an update that is completely independent of updating the Linux software (i.e. that which occurs through the normal apt mechanism and changes files on the eMMC drive).

As you can see, I updated that firmware 4 months ago, and as it happens I have remained on amber the whole time (although I have applied all amber updates as and when they become available). So I guess I would have noticed by now if something had gone horribly wrong. I could reasonably claim that the updated PD controller firmware is OK to use with amber.

I can understand though if you want to be ultra-careful.

Can you smoothly run fullHD videos at 60 fps?

I wouldn’t know how to test that (VLC?) and/or how to determine FPS - please specify steps.

One could just find a PeerTube video: https://sepiasearch.org/search?search=60%20fps.

I don’t see any video outputs on the ND at https://nexdock.com/tech-specs/ , so if there is a way, it’s not drop-dead obvious.

AFAIK, ND is just a screen with keyboard and touchpad connected via USB-C. It doesn’t have anything to provide to a video out from. The device providing the output is the L5. Perhaps, one could connect another screen using a USB-C hub… Or maybe the ND’s USB-C port could be used as a hub?

Pretty sure that won’t work - but it would be fun if someone has a video output device with MST support to see whether the Librem 5 has MST support. https://en.wikipedia.org/wiki/DisplayPort#Multi-Stream_Transport

Multi-Stream Transport is a feature first introduced in the DisplayPort 1.2 standard.

I guess there is a chance that it could work!

Purism themselves don’t know it seems

I would just be curious to know and I don’t have any video output devices that are capable of MST.

When I first attempted that with firefox displaying on the ND, it would play for about 3/4 second, then stop for 1, which happened for about 6 cycles until it hung the L5. After a hard L5 reboot, it worked much better, and the vid looks about the same as on my beefy laptop. (The vid was made by someone running, and occasionally goes out of focus & feels a bit jumpy.) I couldn’t get sound out of the ND speakers: in the L5 sound settings, the ND doesn’t appear as an output device.

This flashing light occurs whether or not the ND is plugged into its wall wart. The L5 battery indicator shows a lightning bolt, meaning it’s at least trying to charge.

Hi, did you find a way to charge the L5 from the ND360? Does the phone discharges when using the device (thus limiting the use to a few hours?)

The L5 will (slowly) charge as needed from the ND. Very roughly, it looks like the ND burns somewhere around 15% of its battery reserve per hour to both 1) run its screen & 2) keep a charged L5 (using wifi) topped off. I wasn’t doing anything particularly taxing during that hour: a couple terminals ssh’ed into my main box, and firefox with a handful of static pages open in tabs. I did discover at least one ad vid had been chugging away for a while, at least until I installed ublock origin.

Great! They should ship my ND this week, it’s nice to know the L5 is usable with it, I’ll try and report back as soon as I get it.

I received it today! And it’s working well! I just plugged in the L5, powered the ND on and everything worked. The L5 battery is quite steady, /sys/class/power_supply/max170xx_battery/current_avg shows it’s discharging really slowly (the charged negotiated 5V1A). Audio is not working (but IIRC it’s not supported yet on the L5). I’m have the L5 screen off (single display on the ND).

I’ll try working with this for a few days but as of now I’m quite happy with the experience. I also got a phone call while I was plugged in the ND, and I could answer it with the mouse, talk (via the phone) and look thing up on firefox while being on the call, super cool.

Update: depending on the usage, L5 battery went down (when watching to a movie with uPlayer/livi, firefox running, modem on, wifi off, L5 display) by 10% in 4 hours, but when the use is more light it goes up a bit (2% in a few hours). On the other side, I’m not too happy with the ND battery itself, which drains really fast (when powering the L5). I could test it with the Nintendo Switch in the future to see how well it goes.