we need the cameras to work in software

That seems a pretty bizarre requirement? What does the camera working in software have to do with RF signals? Anyone know why this would be the case?

Probably because the software controls how the hardware is used and they are testing “live” hardware. And software can make hardware run “wildly”. The cameras and its hardware interfaces to the rest of the system use alternating electric currents at high frecvencies. That’s enough to emit RF.

If that’s the reasoning wouldn’t you need to certify ever softeare update also?

don’t give them ideas

Well that explains the mystery why the Librem 5 has not yet gotten the FCC certification. I wish that Purism had simply posted that, rather than letting us speculate for months about what was going on.

I checked the box
hold your order until CE/FCC is available
I received my Librem 5 in France on February 3, 2021 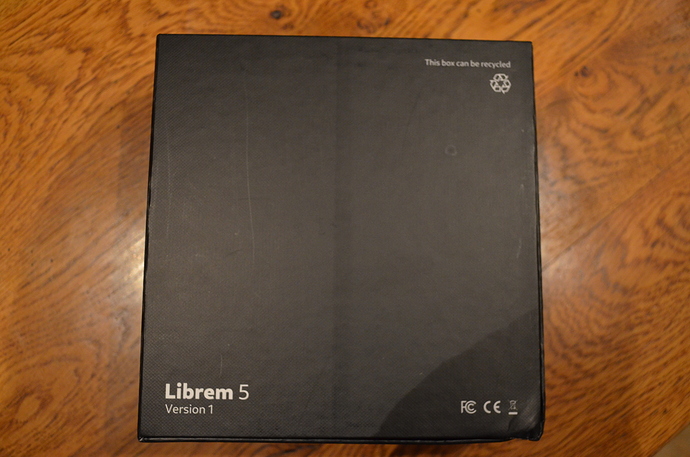 Did they confirm that your phone is certified? Did you find a Declaration of Conformity in the box (EDIT: that might be optional to be included)?

They put those FCC/CE marks everywhere since a few months ago, but they still ask (as of March 11, see above) ask in emails if you want " hold your order until FCC/CE is available". And they never announced yet that they completed the certifications. I think you received it by mistake.

Purism still hasn’t applied for FCC certification according to the FCC web site. Companies in a hurry can do the testing in 4-6 weeks and then the application to the FCC should take 1-2 weeks. If the holdup was the cameras, then hopefully Purism can now send in the L5 for testing.

I think you received it by mistake.

Maybe. Mistakes do get made but …

There is some uncertainty as to what “hold your order until CE/FCC is available” means. It could mean “CE/FCC, whichever is relevant to the location of the recipient”. If CE is available and FCC is not available (yet) and the recipient is in France then maybe it’s OK.

If it means “both CE and FCC must be available” then at the current time it looks like a mistake.

Considering it’s two months since @bjm received the Librem 5, maybe the care factor is not there but if someone cares then the right approach would be to ask Purism support what the question means and follow up from there if appropriate.

Purism still hasn’t applied for FCC certification according to the FCC web site . Companies in a hurry can do the testing in 4-6 weeks and then the application to the FCC should take 1-2 weeks. If the holdup was the cameras, then hopefully Purism can now send in the L5 for testing.

Yes, the holdup was the cameras:

Getting cameras working was a prerequisite for FCC certification (which requires all hardware to be operational for testing), so no - it was quite obviously a higher priority.

But if Purism gets the Librem 5 FCC and CE certified now, then they won’t have an excuse later, for not ramping-up shipping, because of FCC and CE non-certification later.

I can see the article now. It might say something like “…after the global supply chain caught up in mid-2022, we were notified by the FCC and the authorities in Europe, that shipping of the Librem 5 within the US and Europe can’t proceed until we first start and complete each respective certification process”.

To Purism: I really hope you’re working from a pre-release and post-release check list. If these certifications aren’t on those check-lists, please add them now, before someone forgets about them.

Here in the US, I don’t think you can get nor need more than one type of FCC certification on the same device. For an example, if your device is certified for FCC Part 90 (Land Mobile Radio - business band transceivers), you don’t also need to have a Part 15 (for non-intentional RF radiators) certification also on the same device. If the camera is not an intentional RF radiator, then Purism should have no valid reason to wait to get compliance testing done and apply for the FCC certification. All testing will automatically include tests on the whole phone, with respect to unintended RF radiation included. Intentional rf radiators are parts of an application that were created for the purpose of transmitting radio waves. If the camera is there and happens to prevent the phone from complying as an intentional rf radiator, wouldn’t purism want to know that now as opposed to finding out later?

These kinds of excuses, serial steps and accompanying excuses are what needs to end. By now, Purism should have applied for FCC certification. There should be certification laboratories that have tested the Librem 5 by now and either found the Librem 5 to be within compliance, or to let Purism know which tests are failing, so that Purism can work in those issues now, in parallel with everything else they are doing. The certification process should not wait until everything else is perfect on the phone. Everything should be worked on in parallel, not one fearful step at a time, followed with excuses and shipping delays.

Let’s say that Purism really is ramping-up on the Librem 5 and then they find that unintended noise is coming from the camera module and so a board re-design is needed. Let’s say that this is only discovered in the FCC compliance process. You would say “why did Purism wait so long to find this out?”.

Another scenario is where Purism gets an early compliance test that has the Librem 5 passes all tests. Then after they get the camera working and after that, the phone will no longer pass those same tests. Where you start looking to resolve the issue? The camera module.

This may seem like extreme possible scenarios. But Purism should be working with the compliance testing laboratories and writing articles about that process. This most likely explains how Purism is only taking small baby-steps and mostly in series where any mis-step stops the whole process (and it does). They need to do a lot more things in parallel. And that includes FCC compliance testing.

Here in the US, I don’t think you can get nor need more than one type of FCC certification on the same device.

Purism does not only sell in the US.

Purism does not only sell in the US.

The FCC only has jurisdiction in the US. So FCC certification should have no bearing on the customers outside the US?

I personally have no idea, but

I can’t speak for why that post didn’t just use CE, but everything I’m aware of for Germany pertains to the CE marking as that is the relevant equivalent for Europe. FCC certification does not guarantee CE and vice versa.

When selling to both markets you would want both certs, but they are independent of each other as they have 2 separate jurisdictions.

I don’t know how the CE certification works. I only omitted any mention of it in my posts because I don’t know much about it and not because I don’t think it’s important. My point is that Purism being a US company, they should get the FCC certification first and most importantly when it comes to their own survival and the overall success of the Librem 5. Purism doesn’t have to deal with import issues in the US. But if the FCC shuts down Purism’s sales of the Librem 5 in the US, they don’t have a product to sell except possibly outside of the US and then only by sending an uncertified product through customs of various other countries. So if Purism did only one thing, they should get that FCC certification… which they haven’t done yet. Second to that, they need the CE certification also. If Purism were based in Europe, I would think that CE certification should be the most important and come first.

At work there is a restaurant that has a section where you can order grill items and the cook makes your lunch right there where you can watch the food cooking and being prepared. A new chef started work there one day. With a line of between five and ten people, he would take only one order. After he finished preparing that one order and handing it to the person who ordered it, he would then take the next order. The previous chef would keep four or five meals cooking all at the same time as he rushed from one meal to the next, to keep them all going at once while preparing the rest of each meal as everything cooked for several meals at once. On this new chef’s second day, someone ordered a hamburger. The second guy in line said “hey, can you throw one of those on the grill for me too?”. The chef said “wait, wait, this is too much at once”. That chef didn’t last long. The way that Purism is handling their development and release of the Librem 5 reminds me of that chef who couldn’t cook more than one hamburger on the grill at once. Although they do have many parts of the Librem 5 project going at the same time, most new product teams carry-out a huge number of actions in parallel as all required steps are represented by different team members who keep moving their respective parts of the process moving. If one function lags, the whole product timeliness also slips. The way Purism is handling the release and ramp-up of the Librem 5 reminds me of that chef, who got confused if someone asked him to throw a second patty on the grill. I hope they’ve identified and contracted for any required lab work to get the Librem 5 FCC and CE certified. If they haven’t started on that part by now, they are like that chef who is afraid to throw that second hamburger patty on the grill before the first one is finished.

Question to all Evergreen owners: Is there a CE mark somewhere on the device? 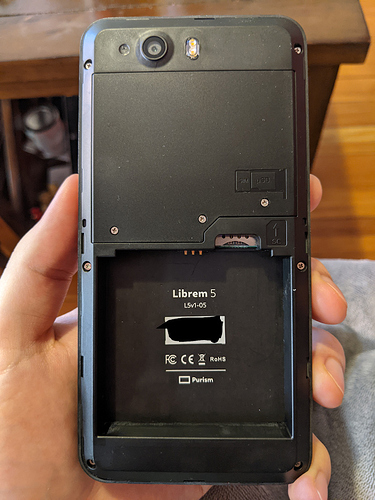 Both FCC and CE marks are on the box too.