Librem 5 USA featured in: Why Phones Aren't Made in America

This CNBC report has some good footage of the production of the Librem 5 USA and interviews with Todd Weaver and Kyle Rankin: 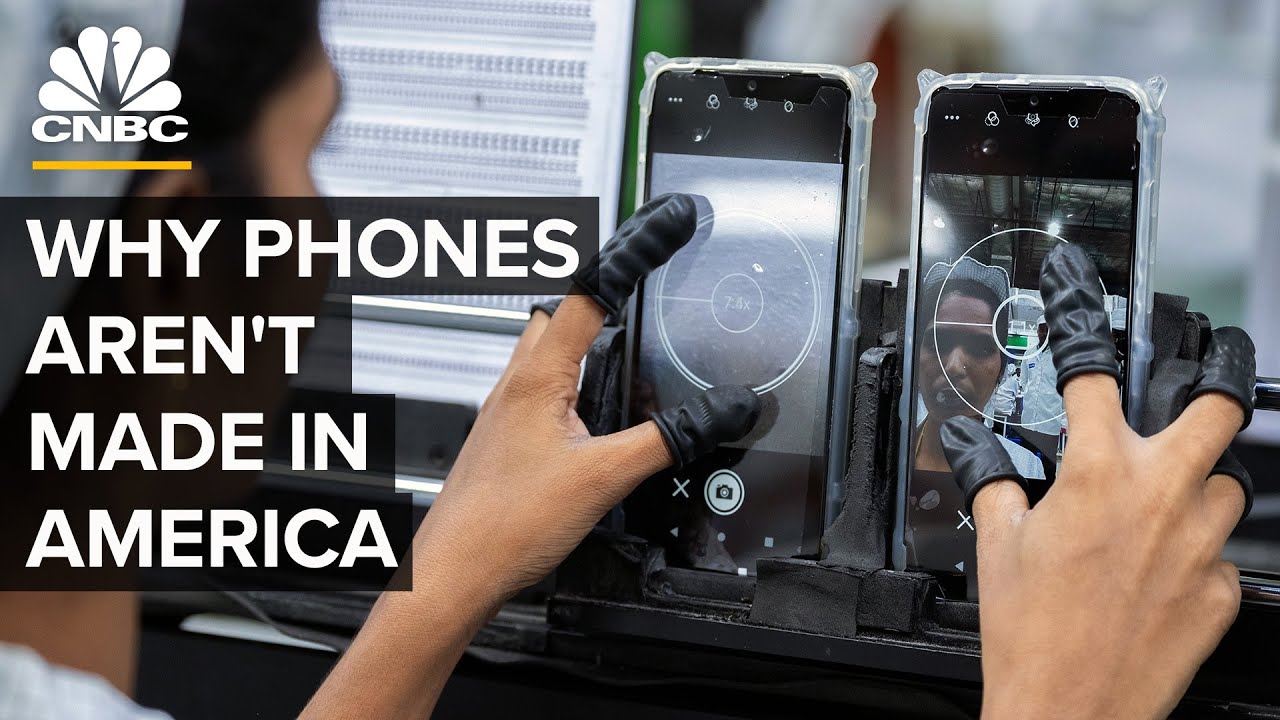 Interesting. One particular point at 9.45 - the narrator says “Purism says it has sold tens of thousands of phones”. That would be a healthier number than what has been estimated for all L5s but the context may have even been just the L5 USA model. I’m wondering how reliable the narration was…

Note it does not say how many phone it has shipped. They should have said how many they have “booked”. (Search “bookings vs. sales” on any search engine.)

That may be, but either way the number is quite big. Like, looking at getting shipping parity.

Narrator: Purism sources all the components in the Librem 5 USA domestically, with the exception of the chassis and the Wi-Fi card.
Todd Weaver: Overall what we are looking at is that all the electronics are manufactured at our facility. The chassis, the specific components–they’re called integrated circuits–those can come from outside the country. As one example, our NXP CPU is manufactured in South Korea and then we import that specific chip and then we use it on our board that we do all the manufacturing.

According to the FTC rules, products can have the “Made in USA” label if the final assembly is done in the U.S, so the Librem 5 USA would qualify:

The Made in USA Labeling Rule, which will be published in the Federal Register, incorporates guidance set forth in the Commission’s previous Decisions and Orders and its 1997 Enforcement Policy Statement on U.S. Origin Claims.

Purism should definitely brag about the fact that it assembles its own circuit boards in house, but that label is just confusing in my opinion.

Weaver says that he hopes to expand the line of products that the company makes in the U.S.

I would love to see the L14 made in the U.S. I’m not sure that I could afford it, but I think that there would be demand from corporations and governments that have strict sourcing requirements and the software on those products isn’t a work in progress like the L5USA, so I can see more corporate customers. I’m more skeptical about the Mini and Server being made in the U.S., since those are currently rebadged OEM products, and it would be a large investment for Purism to design their own products and make them in house.

Weaver: There is also potential for us to get into chip manufacturing.

The only way I see this happening is if Purism buys an FPGA made by Intel in the US and then puts RISC-V cores on it. It wouldn’t be very energy efficient, but Purism might be able to sell desktop PCs with that kind of chip.

According to the FTC rules, products can have the “Made in USA” label if the final assembly is done in the U.S, so the Librem 5 USA would qualify

As far as I understand the quoted FTC rules the Librem 5 USA only checks 1) and maybe 2). But why do you think “virtually all ingredients or components of the product are made and sourced in the United States”, when almost all of the most important components are made outside of the US? I really don’t see how the Librem 5 USA qualifies for a “Made in USA” label according to those rules.

Thanks for sharing! I mean I really think Purism is doing great things with their efforts to manufacture in the US. If they were a German company (or any country, other than China), for example, I would think the same thing. This isn’t because I think the Chinese are evil. Far from it. I have great respect for them and would love to visit their country and enjoy their culture and food. Politically there are issues, and so having all of our collective eggs in that one basket is not smart or safe.

As soon as they build a laptop in the US as well, I’ll buy something other than a phone from them. Well I might get a Librem 14, I am pretty happy with my Framework though. (I have bought a Librem 13 from them.)

I just would like to tell Todd and Kyle great job on the interviews and for presenting the company in the way that was translated in the video. I hope this has a great affect on their sales, because I really want Purism to keep doing the grueling and hard software work they are doing.

Edit: This was written from a Librem 5.

Server being made in the U.S., since those are currently rebadged OEM product

One thing I noticed Todd specifically did not mention is that they sell servers. I noticed that none of the servers they had were available anymore, so I think they are no longer selling them. Or perhaps their availability is such an unknown that they felt it better to not mention that.

I really don’t see how the Librem 5 USA qualifies for a “Made in USA” label according to those rules.

Yes, you are right. When I read those rules, I was thinking 1 or 2 or 3, but rereading the rules, I see that it is 1 and 2 and 3. I guess that explains why Purism decided to use the “Made in USA electronics” label instead of just “Made in USA”.

I doubt that there is any electronic device of significant complexity on the market today that can be labeled as “Made in USA” under those rules. Given the rules, Purism should use the label “Made in USA circuit boards” in my opinion. Of course, the critics would point out that the M.2 Wi-Fi and modem cards also contain circuit boards.

It is still a significant achievement for Purism to do board assembly and final assembly of a smartphone in house in a developed country. It is reported that 8% of Samsung’s smartphones are made in S. Korea (the high-end S/X/Note models), but those are mainly for the Korean domestic market, and Samsung also has a factory in Taiwan. Samsung has been cost cutting its operations to compete with the Chinese brands in recent years, so I’m not sure what is the situation today, but almost all Galaxy’s sold in the West were assembled in Vietnam.

Sony is reported to make some Xperias in Japan, but those were mainly for the Japanese domestic market. Most Xperias for Western markets are made in Thailand, although some people reported buying the Xperia 1 ii in the West which had “made in Japan” labels on them. Bittium says that it makes its phones in Finland, but it is unclear if that includes board assembly as well. I read that Asus makes some phones in Taiwan. This article says that some ASUS and HTC phone models are made in Taiwan, but I don’t know if I believe it, since both ASUS and HTC have manufacturing in China.

Does it work with used U.S. parts? I have an old printer board with a Z-80 chip on it. Could someone make a phone out of that?

label to be confusing

I just look at it as a step in the right direction even though obviously “100%” has not (yet) been achieved.