My Last Straw with Windows

Hello, first post. I have been a long time lurker around this forum and a big supporter of open source and the ideals of purism. I have wanted to spring for a librem 5 for a while but just haven’t been in a financial stability to tie up those funds for the foreseeable future.

But anyway on to the main point of this. I have a lenovo p53 because at the time it was the only thing that had top of the line specs and a touch screen. It came with win10 pro on it and I installed fedora on my second drive. For some reason I always thought since I am fairly apt with computers that I could control the closed source black hole known as windows.

I had multiple occasions where I would fight it to do simple tasks and I would sometimes take weeks working on a problem because windows thought it knew better than me. But I was in control right? One thing that always bothered me was automatic updates. It didn’t bother me enough though to fight it so I became complacent. Who cares if it updates. It’s running on an nvme drive so it doesn’t take that long to complete. So I let it be. My complacency grew and I began to let more and more things slide. Until earlier today when I decided to try and install windows 11 on my third drive just to mess around with it’s android support. Unfortunately windows 11 requires tpm 2.0 and secureboot which my bios didn’t seem to have. So I checked lenovo’s website and they had a bios update.

I tried downloading their update file through fedora and it gave me some cab files which I didn’t know how to use. They had an exe file for windows so I decided to go that route. I booted my windows drive and proceeded through the installer, all was going well until it got to the point of needing to do a reboot. at that exact moment windows decided that it was the boss and immediately launched into an update. I watched in horror as it did God knows what to my system which had explicitly told me to NOT touch it until after the update had finished. after it got to 100% it rebooted and then nothing. my fans spooled up, my power button lit up but nothing happened on my screen. Feeling devastated and angry I waited and felt the fear I’m assuming my grandma feels whenever shes asked to do anything technology related. Finally after maybe a minute but what felt like eternity it rebooted and a bios self healing screen popped up as it flashed back to the original bios version. After a long couple of minutes I was greeted by the windows login screen staring into my sole as it had nearly turned my laptop into a five thousand dollar paper weight.

It took me this long to realize that with windows I am just a user. To have ever thought I was anything more was delusional and almost costly. This is the last straw for me. I am never going to use windows again… I’m just glad I learned before something worse happened.

I am hoping this is okay to put here. I couldn’t find any categories that matched this and this doesn’t seem like it fits into the theme of the site but this forum is the only one I know of that wouldn’t understand the vile, contempt, and hated I have for closed source systems that try to think for you.

Feeling devastated and angry I waited and felt the fear I’m assuming my grandma feels whenever shes asked to do anything technology related.

It’s the fear that comes from not being in control, I think. We should control our technology, not the other way around.

Once you are free you can never go back.

I edited the title to make it clear that this is a rant on Windows, not directed at Purism.

I once lost a motherboard because windows BSOD’d during a bios update. Like you, I said never again.

Welcome to the rest of you life.

I first installed Linux in 1999, but it took me 7 years before it became my primary system. It was a slow transition from dual booting, to running virtual machines, to WINE, and finally no longer needing any Windows software, which took me 15 years. Hopefully, you can make the transition faster.

People used to ask me to fix their Windows computers, so I had a bunch of Windows software sitting in a box. When I recently moved, my wife insisted that I get rid of all that junk hidden under the bed. I gave away 4 PS2 keyboards, 4 PS2 mice, two old laptops, one 15" CRT monitor and one AMD CPU, and threw away two Pentium II CPUs that nobody wanted, but I still had a stack of 30 CDs/DVDs of Windows software. Most of them went into the trash, but I figured out how to get some use of them by turning them into hooks for a shower curtain: 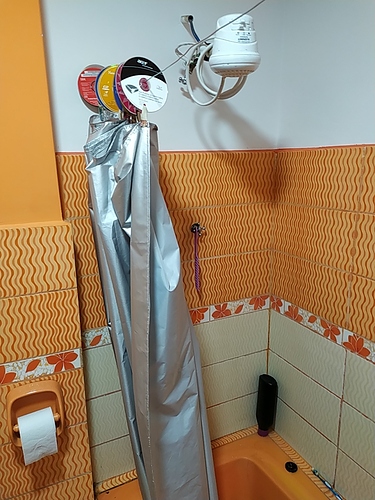 For the first time in my life, I don’t feel dirty when using Windows.

that junk hidden under the bed. I gave away

I clung onto my PS/2 keyboards up until last year when I couldn’t find a decent replacement that wasn’t USB. I just looked, I have 4 spare PS/2 keyboards and one mouse, and a few USB ones too.

To stay on topic: My switch to full-blown Linux took a few years. At first I thought iof it as another tool alongside Windows, but the more I used it, the more I preferred it and grew to resent dislike things about Windows. Most everything is easier on Linux for me, and it makes me happier, which is the most important part.

OP, here’s to GNU/Linux not shoving updates down your throat (unless you ask first).

Thanks! I was more wondering about the category because it said only for people with purism hardware which I unfortunately don’t have yet

Thanks, I probably could have been more clear but I was too annoyed to care when I made this post haha

Oof sorry that happened, I’m just happy my laptop had the self healing feature!

Thats hilarious! And efective use of defective equipment haha.
Also the only thing that is really windows software specific is some dumb pc games and I think I can live without those. The only thing is lack of linux drivers for my laptop :(, it unfortunately is stuck at min brightness and my trackpad doesn’t support tapping kt fir a mouse click but those are small sacrifices

It took me this long to realize that with windows I am just a user.

My Opinion:
Considering the options you don’t have, such as who you thought controls your devices, when you may use it, and why 10 and 11 are free (want some candy little boy) then the 10/11 devices are, IMO, no more than a leash. You pay for the hardware, and you are permitted to do a few personal and business things.

If you haven’t seen and disabled all of the SMIRCing creatures inside your leash, then you are the commodity. IMO, Microsoft plants their 10 or 11 in your garden, and they harvest everything and anything about you, and pimp it out to advertisers and marketeers. You paid for the device, you pay for Internet connections, and they let you use their 10/11 so they may abuse your rights to privacy. And if something doesn’t work right, contact that Administrator everyone seems to have.

Enjoy your freedom! I’ve ditched Win7 for Debian in 2013 and never looked back. At the beginning world of FOSS was kind of overwhelming as there were too many options for everything, but it is actually the beauty of it. To build the system which suits your need and trying new things. You don’t like the way the new version of your desktop environment looks? Well nobody forces you to use it!
It is not something which a windows user can ever experience!
… unless it becomes open source

Yeah, no kidding. The overwhelm of choices got to me as well. The easiest OS for me to start with was Linux Mint, despite its issues it helped me become more comfortable using the command line or just switch to GUI apps. Now I am slightly more confident messing with PureOS. I am also happy with the messing around I did on other Linux OS’s paid off here. I am more determined to get PureOS working for me at this point as I can fully respect what Todd Weaver is doing technology wise.

It is not something which a windows user can ever experience!
… unless it becomes open source

Once you are free you can never go back.

Unless you actually need a computer to do something that isn’t possible or available on Linux. (like power efficiency, thermal management, sound design, graphical application, etc.)

That said, I think what Valve is doing with the Steam Deck is one of the single most important things going for Linux right now. Proton / Wine are truly important things that deserve all the effort we can give it.

I am 100% Linux based except my android (hoping the new money raised greases some of the production issues so I can drop that as well) … because I can do 100% of my work on Linux. Some of my colleagues use Macs and others use Windows. And, to be fair, these days I hear devs just say they prefer to use Linux for dev work on the right software stack because it is easier than the othe two platforms.

I mean even graphics work is getting ridiculous on Linux. Blender has upped the game to a point they make Max and other solutions look silly, Inkscapes last release is incredible and to be honest the only people complaining about Gimp forgot how much effort it took to learn Photoshop.

As for daws, Ardour was always amazing and I see that things like Reaper have Linux releases, so who knows. Probably it would be best to see if Pipewire resolves any of the latency / other issues (I was always happy with Jack my self).

If I were a one man graphic design studio would I use LInux as a main platform? I would and there are A TON of professional graphic designers exclusively on linux, some of them even have Youtube channels discussing it. If I had a recording studio, would I use Linux as my main environment? Well, considering there is no money in that business and most of the big studios are closing or already have their Pro Tools licenses, I’m not sure. Kind of depends how serious you are about such a tough career choice.

I mean, ostensibly yes you are right, for various values of right. But even in the obvious areas you pointed out, it has been possible to do top level professional work for a very long time.

I know that project. It is incredible it still exists after so many years!