Never thought i'd live to see this day!

it’s probably not a surprise for most of you but for me this is the first time i’ve actually run into something like this here on blizzard battlenet. 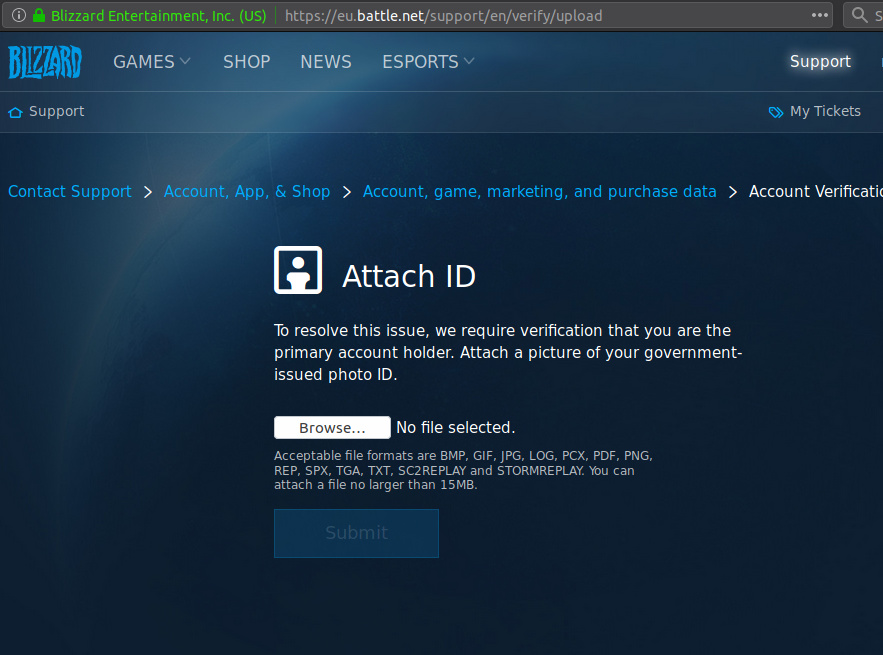 You know, I mail their support once a year, if they release linux client for their MMO’s. Now I can stop that. Thanks for the news

i’ve attached this here since i do not know how many of you have tried allready to close/delete an account at blizzard/bnet and succeded. i’ve no intention of letting them have any government issued id from my behalf. this is outrageos. but the thing is how do i get in contact with them ? maybe send a GDPR letter (what a joke right ?) … any suggestions ?

Yikes, that’s pretty outrageous. My battle.net account has been dusty for ages since they basically turned StarCraft into Overwatch, I just left it altogether. Good luck with your account!

Now I can stop that

no please DON’T stop that. let’s ALL just spam their servers with LEGITIMATE requests or rather let’s just not play Blizzard games anymore untill they change their ways.

have you heard of the ddos attack Russia pulled on Estonia back in the day ? and that was just over a sculpture …

I was naggig them about linux client because I had an intention to return to playing their games, should they run on Linux natively. Now I have no such intention. Turns out, their business practices are no longer acceptable to me. So the nagging stops now.

So what are my other options? Desura went down some years ago and I did not notice, untill now. They were great service. Every game I bought from them, years ago, is still working on my computer.

I’m kinda lost, but than again, I dont have that much need for gaming, you can guess.

They sure don’t make PC games like they used to.

I was tempted to make an account for that new COD game that came out last year but I never got around to it.

It’s been ages since I’ve owned such a game and they haven’t been fixing the issues from every release.

Good to see I didn’t waste my time by registering with these scam artists.

i used to play Blizzard games like wc3 and starcraft for the storyline and rich lore but then i stopped and I remembered that i still held and account there and i wanted to close it. it’s strange that a game company such as reputable as Blizzard would impose such strict and weird countermeasures against account deletion and data removal. i mean why don’t they ask you for such identification in the first place ? it’s not like they don’t have your credit card number and name if you bought games online …

It’s likely a result of the targeted identify theft attacks they’ve been subject to because of WoW and the demand from customers that their investment of time and money not be easily removed if someone else were to steal the account.

I’m not saying it’s right I’m just saying I can see how in trying to please one group of customers you could upset another.

Regarding a GDPR request to be forgotten as a way to remove the account; as I understand it, the GDPR process would also require they verify your identity and that identity verification process appears, at least to me, to allow for some level of discretion from the company. In turn I expect that you would still be required to provide some form of government issued ID.

I am curious to know what resolution you come to when you reach out to their customer service via Phone/Email as I expect a human being involved would be the way to get past this roadblock. Systems are very good at doing the same thing over and over and are generally built for the majority, sometimes when you’re doing something slightly different you have to get a hold of a person to go around the system.

if anyone knows their contact adress for such human-to-human interactions i would apreciate it if you could write it here. i looked around the main site and it seems this close account system is automated. maybe i missed something somewhere …

I’m not in the habit of putting a company’s phone number on another companies forum, with that said; within the first 3 results for “blizzard support number” in every search engine I tried resulted in an accurate 1800 number.

I also noticed on their site if you try different support options you can get a call-back/live chat which would get you a person whom could direct you to the correct contact method for what you’re trying to do.

is that phone number reachable from the EU ?

well no matter - i think it’s silly to even consider calling if it means paying for that … i could understand having an online chat with a PERSON (a ticket maybe ?) but any other alternative except maybe email is preposterous.

how would you explain to a PAGEET the importance of privacy in a world run by credit cards ?

still you would need an online account even if you did buy bnet cards. also i don’t support nor do i encourage anyone to buy from them anything as long as they maintain this monstrous tendency…