[Note: This thread is intended to be a discussion thread for the topics in this post. Please keep your replies on topic. Some examples of off-topic replies include:

“When is my order shipping?” (We contact people to arrange shipping and update shipping addresses over email, not in a forum thread.)
“I have a support request.” (These are better handled with the Purism support team.)
“I want to air a personal grievance.” (You can do that in your own topic.)
]

Every manufacturer has a supply chain, down to the raw materials suppliers whose supply chain is the earth itself. Links within the supply chain can (with difficulty) be swapped out for similar suppliers but each link in the chain and who controls that link is important. Over the course of the last twenty years the method of holding swaths of inventory (which is equivalent to cash value sitting on shelves) began dwindling in favor of just-in-time manufacturing, and the more reliable the suppliers in a supply chain on delivering just-in-time the less desire to hold inventory (also called safety stock).

Manufacturing in the technology sector has some additional churn to dissuade holding parts stock in high quantities, parts like an I.MX8M Quad rev AA, are devalued when they’re deprecated in favor of the improvements created by rev AB. This high-churn in technology reinforces the just-in-time nature of manufacturing and acts like a heavy, metal ball on that chain that restricts your movement. 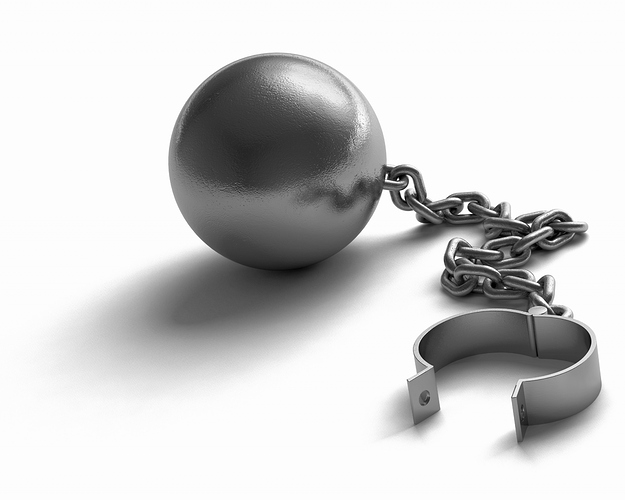 The Ball and Supply Chain – Purism

After waiting over 3 yrs. another yr. won’t kill me. Not Purism’s fault anyway. C’est la vie.
Thanks for the update. Makes waiting easier

Does the Librem Key supply issue affect L14 customers who already placed an order with PureBoot bundle and are waiting for shipping?

We currently have Librem Key stock so it shouldn’t but I also haven’t reconciled the outstanding PureBoot bundle orders against that stock to know with 100% certainty.

Thanks for the update.

At least come October, things I am looking for (camera app, mmsd, maybe even better power management) should be far more mature.

I should actually follow up to say that when someone orders a PureBoot Bundle it would subtract a Librem Key from inventory, so if enough were ordered that we would run out of stock it would place the Librem Key on backorder on our site, so based on that I think I could state with more confidence that we have ample Librem Key stock for the existing orders.

That’s good to know, thanks Kyle.

In a different, but related issue: Considering the target market of Purism, wouldn’t it be wise to add an option to buy Librem hardware without SSD / RAM ? Specially since the WiFi card is already optional (which I’ve personally never seen another company do)

I have 2x256gb NVMe drives sitting in my drawer unused because it’s almost always better to go with the cheap option when buying a computer and then upgrading it later. I wouldn’t mind even geting a $10 or $20 discount for not getting these parts, as this would help reduce electronic waste.

We get that question from time to time. We require some kind of storage with some kind of OS on the device both so we can do final QC before shipping more easily, and also that we know for a fact that the end customer will start with a fully functioning computer. That way if they happen to install a 3rd party, untested disk in there and there are problems, and they contact support, we have a known-good configuration we can test against. It’s the same reason we don’t allow people to order a computer without RAM.

Thanks for the update and clarity on the CPU (supply) issue in regards to the Librem 5, appreciate the tabled data at the end of the post!

Thanks Todd and Kyle, very informative and detailed, which is always appreciated here.

I knew from the sense of dread established in the first paragraph, building over each successive section, that there would be some kind of bad news at the end.

The details about the current status of each product are exactly what the community likes to see, even if the revelation might be disappointing.

We will be increasing prices in stages over the next year as BOM prices change and as we deliver greater quantities of product.

What is meant by next year? Calendary year 2022 or the next 12 months from now?

Does that mean, that Purism already don’t have enough CPUs or how do we have to interpret this?

Thanks for the update!

Yes, please explain this table entry. Do we have to read this as “no L5 until October”? Thanks.

Are my following interpretations of the Chart correct?

So…price increases steadily over the next year on a product you may not get for a year or more!!! Marketing genius

As disappointing as it is to hear I can’t really blame Purism. Shortages are severely impacting many of the interesting, weird phones not made by huge corporations that sell millions of them a year. It’s affected F(x)tec, Planet Computers, and Pine64. I’m fairly certain that the i.mx8 is used in cars, so if they’ve been ordered to divert shipments to them, they have to take them from somewhere.

I really do have a problem with the price increases though. It’s not like that surprises me either; with 35% inflation over the last year (if not more) you can expect the prices of everything to go up 35%…not that our wages are going to match that. I paid $600 for my pre order and it would be easy to recommend to anyone if it were sold at that price now. Since the prices of flagship phones increased to regularly exceed $1000, a recommendation at $800 now is about as hard as $600 was then. Trying to sell people on a $1000 Librem 5 is going to make me sound crazy even to people who understand why the world needs it.

I mean really, outside of here it’s like the Librem5 doesn’t even exist, there’s only the pinephone. And without two visible GNU/Linux phones, the concept is just going to look like a weird experiment instead of a more desirable paradigm.

But on the other hand every new preorder just adds to the backlog. I could forgive it if the price were to drop later once they’d cleared through it.

It really is a shackle. There aren’t very many good options I can think of save to try and use the time to accelerate development of a new motherboard with an improved CPU and more RAM (at least more RAM, less than 4 GB scares people) for future batches, but that’s only an option if they can actually GET those components too.
I’m pointing my finger squarely at the demand created by the lockdowns, new consoles, and miners. There’s been a shortage of silicon wafers for years, (and important factories have been having problems) so when there’s even a slight uptick in demand they all just went to the biggest customers.
Basically, welcome to 2021. Nope, everything still sucks.

That’s how I understand it as well

I got an email at the beginning of the year that my Librem 5 would ship in April and then at the very last day they put up a blog post about how there is a delay. Wouldn’t it have been better to have informed people as soon as possible that the previous estimate was going to slip? I don’t think that is too much to ask for.

What seems to have been made clear to me if you followed the Laptop Librem 14 thread is that purism has a propencity,to habitually not get out in front of an issue but rather let it unfold,unravel,get out of control and then when it just cannot be ignored… you might get a short reply in the forums. I believe this hurts purism more than any supply issues or such, cause you cant buy reputation,suppliers dont sell that.

It says the CPU for the Librem 5 is unavailable until October, but the Librem 5 USA will reach shipping parity in Q2 2021. Don’t the two phones have the same CPU?