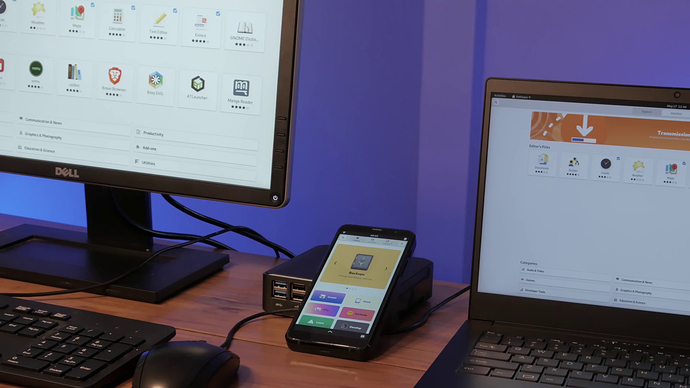 Please consider ditching the word “alternatives” or shift it over to mean proprietary software. Libre software should be considered the first choice.

A valid philosophical point but in practical reality the substantial majority of people in the internet world are selling themselves and need an alternative to their current path.

I wish that free software was the norm, and proprietary software was the alternative, but StatCounter reports that Linux had 2.45% global market share on the desktop, 0.02% on tablets, and 0.01% on mobile phones in May 2022.

Linux has had the same 2% market share on the desktop for the last decade, so I don’t think there is much hope that any of the major PC makers will start selling Linux in a significant way. I have more hope for the phone/tablet market, where I think Linux offer more benefits to the OEMs, and users can see a compelling reason to use a Linux phone due to longer device support and privacy concerns.

Well, since Purism is essentially creating a new market - a market about freedom, privacy and autonomy - they should not, in my opinion, be concerned about low presence on existing markets.

“Alternative” sound like not a primary and implies an inferiority. Just how I feel about it. English is not my native language so feel free to correct me.

There is of course no definitive answer as to what any given word means (at the risk of sounding like Humpty Dumpty in Through the Looking Glass).

Much will be assumed or implied from context.

In some contexts, alternatives are entirely equal. For example, when your ISP hands out two (or more) DNS server IP addresses, or an authoritative DNS server hands out two (or more) IP addresses for a domain name, they may be handing them out in a round robin fashion in order to spread the load equally between the servers, and all the servers are equally capable. They are just alternatives.

Or, for example, when you are presenting syntax (e.g. BNF) and a non-terminal is defined as any one of several alternatives, no alternative is inherently inferior.

In other contexts, an alternative might be some kind of backup (and hence presumably inferior in some way to the primary because otherwise why wouldn’t you use the backup all the time, and make the primary the backup).

And likewise in more advanced DNS settings (SRV records, MX records) superiority can be expressed explicitly in the DNS data - or the round robin could behind the scenes be weighted to reflect superiority.

One thing is clear … the point being made by me and by Amos … free software users are numerically inferior.

I think this may be a bit of oversimplification of the stats. I took a look at the stat from since 2017 and it tells a bit of a story. The relative amount of linux has stayed the same but - and correct me if I’m wrong, since didn’t check the stats - at the same time the number of desktops has risen and also started to fall as there is more pressure to use mobile and tablet as the only device. This has affected OSX for a couple of years now. Also, the way I interpret the mirroring of “unknown” vs. windows, is that users are obfuscating and hiding their details. Sure, many do still use windows (various versions from XP to current abomination) but it is also used as a default to hide linux browsing and linux users are more likely to use such tricks. All in all, the relative linux share is likely to be a bit better than what is shown and the absolute number is probably bigger now than what it was.

This of course does not change the main argument that mobile is more probable avenue to make linux mainstream. I would however suggest that at the desktop side MS may be pushing W11 a bit hard with features that scream ecosystemlock (or similar) and non-privacy which could start a search for alternatives when W8 and W10 become close to EoL. Also the huge leap in gaming (powered by steam) may open up new avenues as W is no longer the only option for gaming, even though this is not free software territory. So, the situation may not be as set in stone as it appears - there is hope.

I went back and checked every year of the StatCounter data. There has been gradual rise from 0.8% in 2010 to 2.4% in 2022, so Linux on the desktop does appear to be growing, but very slowly. I think that Windows users are trickling over to Linux as Microsoft increasingly adopts surveillance Capitalism as its business model, but I didn’t see any noticeable rise in Linux use after January 2020 when Microsoft stopped supporting Windows 7. That should have been the point when people who are worried about privacy should have started switching from Windows 7 to Linux, but StatCounter shows that they switched to Windows 10, which is based on monetizing user data. Windows 11 is even worse, so maybe we will see some migration when Windows 10 support ends, but I wouldn’t count on it.

None of the distros that I have tried switch the user agent in the web browser from “Linux” to some other operating system, and I don’t think that many Linux users manually change it on their own. The “Unknown” category may be hiding some Linux users, but that category has bounced up and down a lot, between 1.9% and 15.0%, which doesn’t sound like Linux users, who are usually very loyal users.

As I see it, over 90% of PC users will use whatever comes pre-installed, so Linux will stay a fringe OS as long as the major PC makers refuse to sell Linux PCs in a significant way.

This isn’t to say that FOSS is failing. In 1999 when I first installed Linux, I never imagined that the top 500 supercomputers would be running Linux and that 85% of the world’s cell phones would be running the Linux kernel two decades later. I also think Linux has an impact, because Microsoft, Apple, and Google know that people do have an alternative, so they can’t abuse their power too much, but I think the bigger impact has been the spread of FOSS ideas to many different spheres.

… without checking, I think Firefox does this automatically if you set “resist fingerprinting” (which you most definitely should consider doing, providing you understand the pros and cons). I show up as a Windows user 1 where the version is randomly chosen by Firefox. (In addition to that, I believe there are Firefox add-ons that allow you to make a more explicit choice of your user agent string.)

1 I feel dirty just saying that.

This isn’t to say that FOSS is failing.

Not to mention all the online servers that run Linux.

That’s the trouble with those statistics. I doesn’t directly measure distros but browsers. Several browser extensions change user agent, as well as Tor browser. And doesn’t Tails come with Tor?