I’m using a Librem 5 with AweSIM. I’m receiving some, but not all of the texts that people send me.

Today, when signing up on a website to receive texts, I could not receive the confirmation code that they texted to me. I hit “Resend” several times. I finally confirmed by having their computer give me a voice call, which did work.

Also, in the past few weeks, I have had two different friends tell me, by text, that they sent me texts which I have not received.

Are you sure they’re not sending MMS instead of SMS? The L5 doesn’t do MMS yet, although that is probably coming soon.

SMS are sometimes automatically converted to MMS if the text is extra long, or is part of a group message. (Or is an image, obviously.) At least, that’s how I understand it.

I was under the impression that MMS was only for multimedia. It’s possible that my friends are trying to send group messages. However, I’d be very surprised if that confirmation code I was supposed to get was very long.

I can’t rule out that it is an L5 / chatty problem but I had the same with androids so it may be a inter-provider problem or so.

[quote]SMS messages are generally treated as lower-priority traffic than voice, and various studies have shown that around 1% to 5% of messages are lost entirely, even during normal operation conditions,…

Some providers allow users to request delivery reports, either via the SMS settings of most modern phones, or by prefixing each message with *0# or *N#. However, the exact meaning of confirmations varies from reaching the network, to being queued for sending, to being sent, to receiving a confirmation of receipt from the target device, and users are often not informed of the specific type of success being reported.
[/quote] 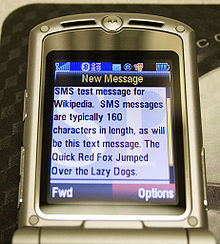 SMS (short message service) is a text messaging service component of most telephone, Internet, and mobile device systems. It uses standardized communication protocols that let mobile devices exchange short text messages. An intermediary service can facilitate a text-to-voice conversion to be sent to landlines. SMS, as used on modern devices, originated from radio telegraphy in radio memo pagers that used standardized phone protocols. These were defined in 1986 as part of the Global System for Mo...

So you could try to get a confirmation on the sender side. I wonder if and when AweSIM would send a confirmation. This could be used to determine when the receiver uses the device (in the sense of power it on and connecting to the mobile network).

That might have been sent as MMS as well, though not necessarily.

And it could be a problem with Chatty, although I haven’t observed it myself. But I’m also not using my L5 as my main phone yet, either, so I can’t verify.

Did you not see this topic? I first noticed the issue when I was supposed to get a 2FA notification? I was told the issue could also occur if you receive voicemail in addition to MMS, but I can’t verify that.

I came across this project. It says that getting MMSs can prevent you from receiving SMSs, and we need that program to unclog the phone. This is a huge problem. It means that any group text sent to us is essentially a DoS attack.

In your thread, you say that you temporarily moved your SIM card to another phone to unclog your message queue. I think this is a very risky move. I’ve gotten a text from AT&T about how my phone won’t work after 2022 February. This might mean that they’ll reject my L5 if I move my SIM card to another phone and back. This is exactly the problem I had, without warning, from my previous carrier. Right now, even with AweSIM, I don’t trust Purism to ensure this won’t happen.

Purism support actually recommended tome that I temporarily move my SIM card to an Android phone to unblock the messages. I wasn’t aware of jmms, although I also wasn’t aware that MMS messages were causing the issue until Purism support told me.

As for ATT (or MVNO on top of ATT) locking out non VOLTE phones, I had been assuming that they wouldn’t be doing that so quickly as I think their deadline is 2/2022.

I will be trying jmms as well and if that doesn’t work I may take a look at ModemManager as well.

… and there are difficult privacy issues with sending delivery reports. Does the recipient have the right to suppress delivery reports permanently / on a case-by-case basis / never? As your quote says “the exact meaning of confirmations varies”, and the privacy issues mainly relate to the final delivery to the device. (All the same issues that come up regarding email.)

As for ATT (or MVNO on top of ATT) locking out non VOLTE phones, I had been assuming that they wouldn’t be doing that so quickly as I think their deadline is 2/2022.

That only applies to phones that are grandfathered in. If I had gotten my L5 just a few days earlier than I did, my old carrier would have been OK with it for another year or two. Every time you move your SIM card to a different phone, your carrier considers that a new phone. So now I have to be paranoid that using another phone will lock out my L5.

I followed the instructions for jmms, and I’m getting “No new messages received”. I’m not sure if this is to be expected. It would mean those confirmation code texts got dropped in less than 12 hours.

I tried jmms also. I killed chatty, so it wouldn’ t pick up the message, and had an SMS sent. jmms saw the message but it gave me error messages trying to write anything. Since jmms only handles MMS it may be normal given there was no MMS. Then I tried MMS (picture) without text. jmms didn’t find anything. Maybe I should have tried an MMS with accompanying text but I am hesitant to try it more since I have to use a different phone to clear out the messages. The other thing is the program is written in Haskell programming language, which is not one I have experience with. The other weird thing is that it using git locally to write stuff.

I have an update. I’ve been using jmms --poll 60 since the evening of the 6th. I’ve gotten no messages through Chats or jmms until now. I have sent two texts, which I now know my friends have received. My sent messages resulted in jmms saying ‘1 messages in “sent” state’. This “sent state” lasted for a couple hours for the first one and about 16 hours for the second. I don’t know if this means my sent texts are being delayed.

I just now received 13 texts all at once, including the confirmation codes from 2 days ago. They appeared in Chats but not jmms, so I’m sure they’re all SMS. This may mean that jmms is not unclogging the modem like it’s supposed to. On the other hand, maybe it will work in the future now that I’m up to date on my SMSes (pure speculation). I’ve asked one of my friends to send me a group text to see if I get it.