NXP is creating an SoC based on i.MX and RISC-V

Continuing the discussion from Purism on creating an SBC:

Purism on creating an SBC

Soon a fully open SoC with RISC V (open hardware) will be available from NXP:

Linux-driven RISC-V core to debut on an NXP i.MX SoC

“NXP is thrilled to be a key contributor to the CORE-V Chassis project leveraging our world class i.MX platform,” stated Rob Oshana, Chairman of the Board at OpenHW Group and VP Software Engineering at NXP.

Unfortunately, NXP won’t be creating a “fully open SoC” if it is sticks RISC-V cores on a i.MX SoC, since there is still the proprietary GPU, VPU, I/O, etc., but it will get us one step closer by using a free/open Instruction Set Architecture. I doubt that NXP will release the source code for its CPU cores. The license for work done by the OpenHW Group is Apache 2.0, which means that NXP has no obligation to release the code for the CPU core that it uses.

On the other hand, we should give NXP credit if it contributes to the OpenHW’s Ariane 64-bit CPU core or helps support its development in some way. So far, however, I don’t see any NXP contributions to Ariane when I do a search in the commits. (It is possible that NXP employees are doing commits, but not identifying themselves as NXP employees.) If the OpenHW cores keep getting better, there is the possibility that some company will use them to produce a free/open hardware CPU in the future, and people can start creating free/open FPGA’s on their own using the OpenHW cores.

I’m hopeful about a future i.MX+RISC-V SoC actually becoming a reality, because NXP has a financial incentive to dump ARM Holding’s straight-jacket and its licensing fees. Not having to worry about ARM Holding’s restrictions will give NXP a great deal of freedom to design for the automotive and IoT markets. NXP has the chance to establish itself as the premier RISC-V SoC maker.

Among the companies currently working on RISC-V, NXP is the most likely to bring it to market in a serious way. Alibaba only wants to make specialized internet servers for its own use. Qualcomm and Western Digital are interested in using RISC-V cores, but they are outsourcing the development by investing in SiFive, rather than doing the dev work themselves, which means that they aren’t betting their companies’ future on it. At any rate, Western Digital only wants RISC-V for its own use in its SSDs. If Qualcomm were really serious, it would do the work in house like NXP is doing, but Qualcomm has too much of a lock on its current market to play the role of a disruptor. SiFive has big plans but it doesn’t have the resources, experience and long customer relationships to bring RISC-V to market in a major way, which is why I think NXP is best positioned to become the RISC-V leader.

NXP is probably the best company that we can hope for to undertake this. It has the resources ($9.4 billion in revenue in 2018) and the engineering depth from Freescale in Austin, TX to make RISC-V CPUs a reality. Intel and AMD are better than NXP in terms of contributing to the mainline Linux kernel, but they both have an entrenched niche to protect with the x86 architecture.

Among the mobile processor makers, only NXP, Rockchip and Broadcom care about FOSS (maybe you could add nVidia, but it no longer wants to make mobile Tegra processors). NXP has far more resources to throw at the problem than Rockchip and Broadcom processors are still not bootable with a 100% FOSS stack. NXP also thinks longer term, since it designs for 10 or 15 year manufacturing cycles, rather than 5 year cycles, so investing in RISC-V makes more sense on those time scales. Its market niches in automotive electronics, secure identification and digital networking also don’t demand leading-edge performance, so it can risk developing a platform that may not have as good of performance as ARM, but is able to beat ARM in terms of flexibility, customization and no licensing fees/restrictions.

Of course, it will be a lot of work to migrate all the software to a new ISA, but with FOSS, it is doable, whereas it would be very difficult to migrate the Google Play Store or Apple Store from ARM to RISC-V, because it is mostly proprietary code that nobody but the original authors of the apps can touch.

The OpenHW Group are starting with a planar 22nm FDSOI process node and getting speeds up to 1.7 GHz. They are using a very short 6-stage pipeline which should make it easy to get to higher clock rates as they move to smaller process nodes. On the other hand, they don’t have out-of-order execution and it looks like a simple architectural diagram, so it will take a lot more development to get performance that can match the ARM Cortex-A77 or x86. 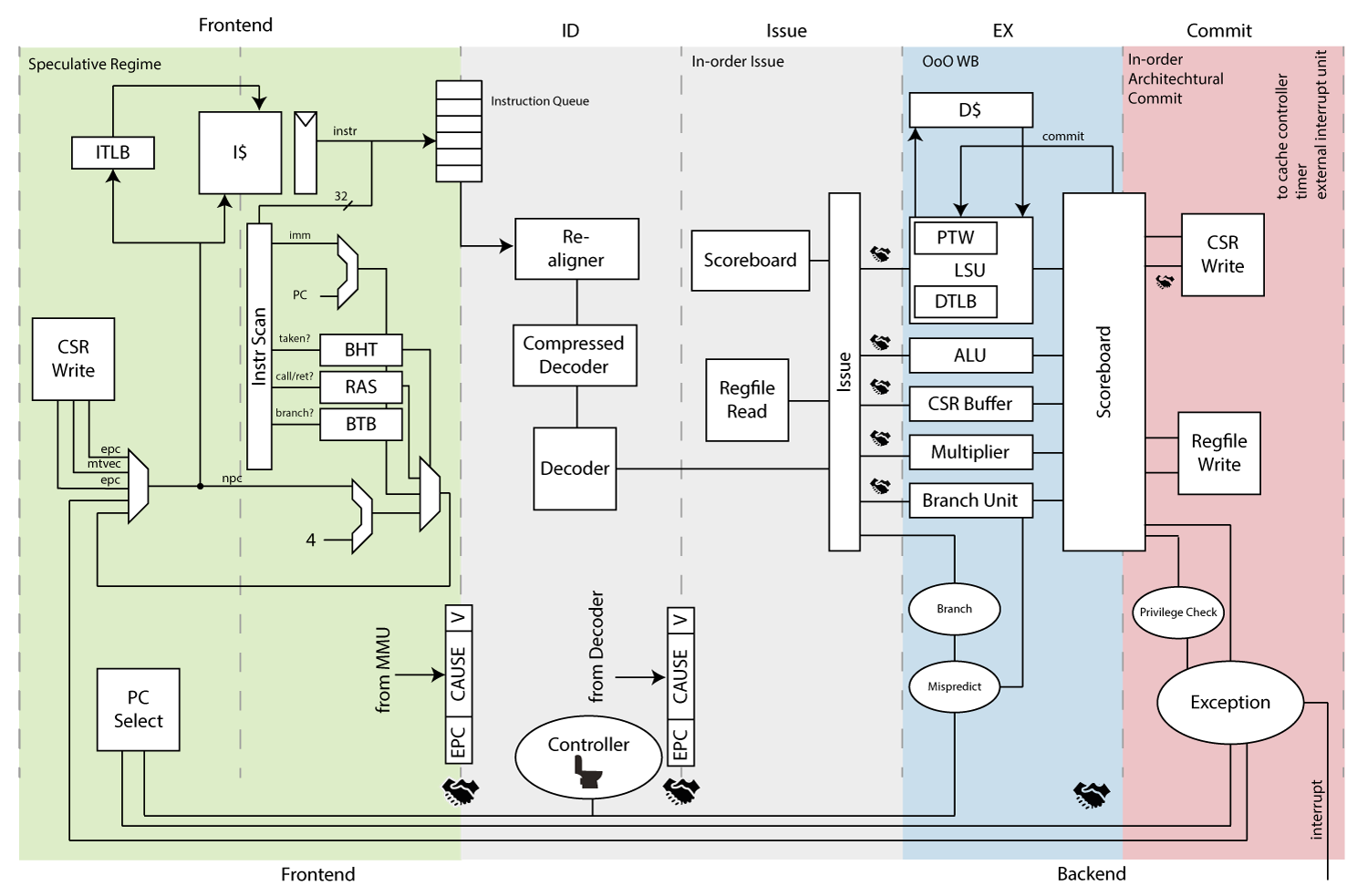 Because NXP is implementing Ariane on the i.MX platform, that will make it much easier for Purism to switch to a future i.MX+RISC-V chip than starting with a whole new SoC from scratch, and it also means that there is a good chance that RYF devices can be made with a future i.MX+RISC-V SoC.

Despite the fact that i.MX 8M has caused all sorts of delays for the L5, it looks like Purism made the right choice in terms of the future by selecting the i.MX platform. It has future upgradeability (i.MX 8M Plus on Samsung 14nm FinFET) and it will likely have a free/open ISA in the future.

NXP is likely to implement this on a planar 28 or 22 nm node since it is so much cheaper to implement than a FinFET node, which means the i.MX 8M Plus at 14nm is likely to be more energy efficient and have better performance. The first iterations probably won’t include the neural processing unit, image signal processor or audio digital signal processor found in the i.MX 8M Plus, so the i.MX+RISC-V probably won’t be a good chip for phones or tablets, and it probably won’t have enough performance to use in a laptop.

In other words, the i.MX+RISC-V SoC probably won’t make that great of a device in terms of performance and energy efficiency. On the other hand, there is probably a market for people who want a usable RISC-V device, rather than an expensive dev board from SiFive that requires a bunch of proprietary software to run. SiFive is planning on using an Imagination PowerVR GPU with a proprietary driver, and its NPU will also likely require a proprietary driver as well.

The question is how many people on this forum would be willing to buy a i.MX+RISC-V device if Purism decides to make it?

Nothing more to add, thank you very much for this very thorough post

I’d buy it, if the costs are in the range of an odroid XU4 or similar hardware (for building a NAS, Router or similar networking hardware)

By the time such an RISC-V chip is released the price of tooling and manufacturing of 14nm FinFET should hopefully be significantly cheaper, so I will hope for it being on the same node.

To answer your question, I suppose it would depend on the device. Although a better question might be “Who wouldn’t want a Purism RISC-V device?”. For example, a RISC-V tablet I’d buy today. Just because. If I could afford it.

I’m thinking that many posters here as well as non-posters would jump at the chance.

I’d buy it, if the costs are in the range of an odroid XU4 or similar hardware (for building a NAS, Router or similar networking hardware)

It’s unlikely that Purism will produce an SBC that inexpensive, because the i.MX 8M chips are expensive and Purism needs to charge a big markup to cover its development costs.

Purism might be able to get a little more competitive with the pricing of its i.MX products once it has recovered the initial development costs of the Librem 5, but it will never get as cheap as the Odroid XU4.

By the time such an RISC-V chip is released the price of tooling and manufacturing of 14nm FinFET should hopefully be significantly cheaper, so I will hope for it being on the same node.

It depends whether NXP thinks that it will have enough volume to justify FinFET or it wants to demonstrate to the world that its RISC-V can be competitive with ARM in terms of performance. If it uses the current Ariane core, there is no point, because it simply isn’t a competitive core design. However, if NXP adds out-of-order execution, superscalar processing, SIMD, a more complex pipeline, more L2 cache, an L3 cache, differentiated cores, etc., so it is competitive, it might be worth investing in FinFET to show the world what it can do.

SiFive is clearly aiming to be competitive with ARM with its U87 cores, and it is talking about 7nm FinFET, but I don’t think that is the market that Purism is aiming for. If NXP decides to aim for the performance market, it probably won’t share its changes to the OpenHW Ariane core. The more performance features that NXP adds to Ariane, the more it has to worry about patent lawsuits and open sourcing the design will make it clear which patents it has violated. On the other hand, it may be able to avoid patent lawsuits by open sourcing everything, because few chip company want the public backlash from suing an open source CPU. That won’t work on patent trolls, however, that don’t care about their public reputation.

The RISC-V Foundation or the OpenHW Group needs to set up a patent protection ring like the Open Invention Network did for Linux to protect everyone using RISC-V. Actually, what we need is a patent protection ring for all free/open hardware. If we don’t have that, nobody will ever dare to make a free/open WiFi, Bluetooth, cellular baseband or GNSS chip. They simply have too many patents. SiFive might have the right strategy, because it is a small company and simply not worth suing since it is basically running on venture capital, but it also has powerful investors (Qualcomm, Western Digital, Samsung and Intel) who can step up to the plate to defend it.