Hey guys! I’m just curious wether it is considered or planned to support desktop icons in the future? It’s a feature I would personally really like for a phone UI, because apps or documents could be opened really fast whereas on the desktop it is faster to type in application names and just hit enter.

Is it something you would consider to implement/would merge if someone implemented it? There is a GNOME shell extension for this but am I right that phoc does not support them? Do other people would like this feature, too?

Hopefully, but in the mean time they can just click on the software icon on the page and select installed. I mean, it’s not a grid of icons but I feel it’s a good enough list with icons. 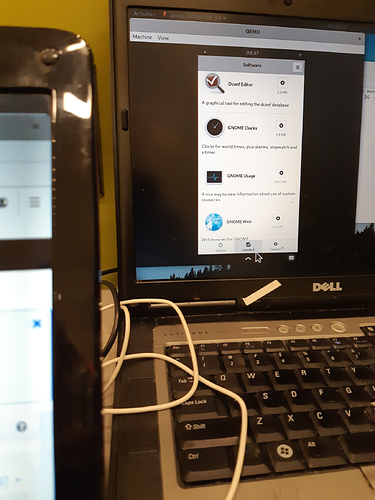 I was about to start a new thread about this issue but as there is an existing thread I’ll say my opinion here.
GNOME’s desktop has become counter productive by removing the desktop icons.
The applications don’t load inside the file browser’s window and the absence of desktop icons makes all tasks more complicated as you need to switch from the files to the apps and back again.
I edit a lot of photos and on my Mint installation I usually move them on the desktop because it is more convenient to load them on gimp.
I also have two disks on my pc and I transfer files from the one disk to the other but as the screen is empty it is impossible to know if I have already mounted a disk after closing it’s window.

On my Mint desktop I know with one glance if there there is any other disk mounted, I can access immediately the files I want to edit, I don’t have to search where I donwloaded something ( I prefer to save the brrowser’s downloads on the desktop ) and generally speaking I work faster.

I think that it was a very bad idea to remove the desktop images from the GNOME desktop. Empty screens are pretty in their minimalism but computers are tools for work not decorative items.

The plugin didn’t work for me.

Some Linux developers seem to have an attitude that I don’t quite understand. It would be just as easy for them to create an easy desktop configuration selection that would make it very easy to put icons on the desktop for those who want to do that…if they wanted to. But no, that would look too much like Ms-Windows. And we can’t have that now can we?

They write the software. We use it for free. So in some respects, we can’t complain. But then again, we can point out that attitude. Not everyone uses their PC the same way. It would be nice if the developers left more options available for people who do different things or who want to do things differently than the developers do as PC users. We really don’t need anything to be different in the way of beginner features, than what Windows 95 had. More advanced features and removing the training wheels for more advanced users, would be very easy to build in to the latest operating systems… if not for that attitude or not wanting to allow anything that looks like Windows.

I guess we could put the steering wheel of your car in the backseat. That would be nice (really?). That might make the guys at GM or Ford who invent that feature feel special. Yes, they have their own, better way of doing things (not). Come-on Linux developers, drop the attitude. We all like new bells and whistles as options. But do we really need to build a different mouse trap when it needlessly impairs use of the OS for many users?

I could argue that even you disagree with the removal of desktop icons in GNOME (I personally don’t mind but I perfectly understand you do), there are plenty of other desktop managers that have them and you are very welcome to use them. “Linux developers” don’t exist.

Whoever releases the new distributions and decides what features the new distro will have, we are grateful for their work. But why not add an “Allow Desktop Icons” selection to a right click on the desktop, or somewhere else? I don’t understand the culture that seems to be driven to remove some time-proven valuable features. It’s not like they would need to write new code which requires additional work. For some strange reason they just remove valuable features that already existed in previous distros before they removed them. Desktop icons in Gnome used to be common. Can anyone here say why they remove features instead of just adding more and better (for more advanced users) features?

It took me about two hours to make the latest Ubuntu installation look, act, and feel like Windows 95 so that the rest of the family could use it too. There used to be a commercial on TV where a bunch of geeks concluded that the software was “so simple that even your mother can use it”. With a voice of disappointment, and defeat they all said at once, ohhhh. That seems to be the culture in real life, for some distros. Linux is capable of doing too much for everyone to need to add artificial limitations like that.

This might be a silly question but what do you mean by “desktop icons” that have been removed?

I have a heap of icons on my desktop, mostly documents and images that I am working on. (Ubuntu 20.04 with Gnome desktop.)

The only thing that I have noticed that has disappeared from the desktop in recent years is the trash can - but you can put that back with gnome-tweaks if you want. (I don’t.)

It would be nice if the developers left more options available for people who do different things or who want to do things differently than the developers do as PC users.

Developers might argue that if you don’t like it then change it. That’s what open source means.

I understand that you personally might not have the expertise to do that, but if enough people don’t like it then someone will change it.

Can anyone here say why they remove features instead of just adding more and better (for more advanced users) features?

I’m feeling that my topic has kind of derailed

It’s now being used for complaining about a feature which has been removed from GNOME. But the topic is about the Librem 5 (see the category) which does not even use GNOME. The feature really have not been present for the whole lifetime of the Librem 5 so please do not complain here.
It was meant as a feature request for some thing which I still think is 100% useful because it’s fast, not too complicated and every user should be used to it.

An alternative (to get feature parity with GNOME 40) would be to boot into the app drawer.

I’m talking about the dekstop icons from PureOS desktop and not of course about Librem.
This particular thread pop up when I tried to start a new one about this issue. I thought that it wouldn’t harm to follow the forum’s policies on new thread and that is the reason why I replied to this one.
I apologise if I replied to the wrong and I confused you.

if you’re looking for full M$-O/S like desktop-environment look and feel you are better served by KDE/XFCE than GNOME. GNOME 40 is already going further down the mobile rabbit hole and it doesn’t seem like it has any intentions to stop.