Today PureOS had a large amount of updates available, including a kernel update. So, I updated and even restarted the computer. Since then, I’ve had odd wifi problems on both of my laptops running PureOS.

On my Librem 15 version 4 I’ve got zero wifi ability whatsoever. But I’ve had longstanding issues with the wifi card on that computer, so it’s difficult to tell if it’s strictly software or software and hardware issues I’m dealing with on that computer. I’ve just ordered a usb ethernet adapter. I won’t get that for another week, however, so I’ll have to wait for that one.

But on this computer, which is a Think Penguin, I’ve also had wifi troubles. I had to plug in the ethernet cable (this one has a port built in) to connect to internet. Then after some fiddling, it seems to have wifi capabilities again. Interestingly, the internet connection in the top right of my screen is still showing a weird looking ethernet connection, even though I’m not currently connected with my ethernet, but instead wifi. So, I’m confused. I’ve attached a screenshot. Has anybody else had troubles with their ethernet since the upgrades? 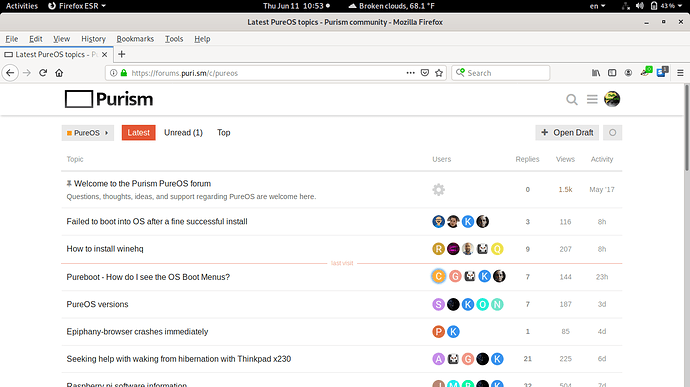 The symptoms are that on boot, the WiFi comes up and seemingly works normally - for about 10 seconds - and then goes down.

So, if you know the interface name of your WiFi, I would look for messages that are logged during the boot. Those messages may make it clearer whether the WiFi does work temporarily or is not working at all.

Had to manually disconnect and connect to my wifi to get it working again and it seems to be unreliable…
So it doesn’t seem to be an isolated hardware issue.