Hi fellow PureOS users, I am trying to install PureOS on my girlfriends HP Stream laptop. The WiFi icon does not exist and when I searched for WiFi on PureOS, it said that ‘WiFi adapter not found’. Please help. I did manage to install Pure OS onto my own laptop though.

You probably need proprietary firmware for the WiFi to work. Post the output from this command to figure out what is your WiFi/Bluetooth chip:
sudo lspci -vv

After typing the suggested command line, i get an entire page of codes i don’t understand. Attached are some screenshots. 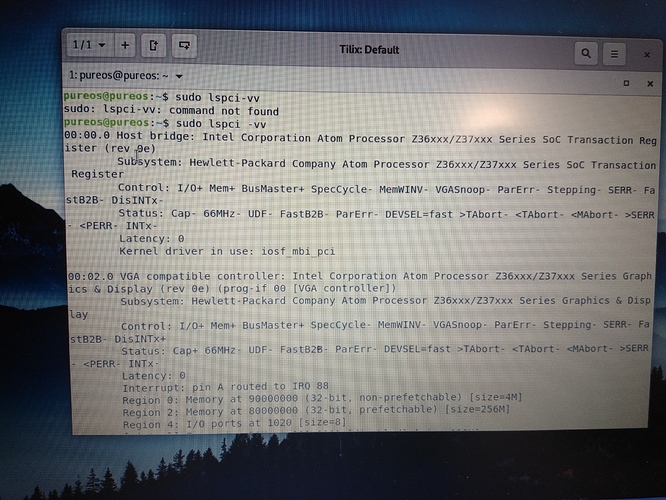 I would suggest omitting the -vv until you can find the device. Also, in case it’s USB, not PCI, you need to check that too.

and you are looking for anything mentioning “wireless”, “wifi” or similar. 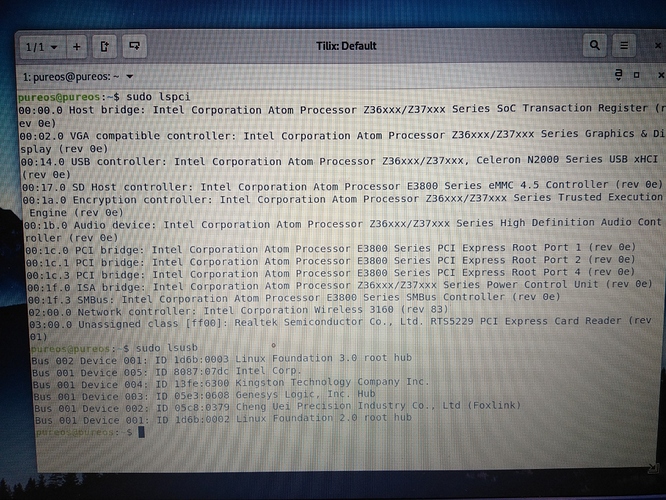 but it looks like “Intel Wireless 3160” is the answer.

So you would need to grab that driver from a repository other than PureOS and then install it under PureOS. However you would first need to install PureOS on the gf laptop - without the internet (unless it has working ethernet). Your own laptop can be used to help with that.

Save it on a flash drive and put in into your PC and then either use the dpkg -i command as shown above or right click on it and select the GDebi package installer from the popup menu to install it (if you have gdebi installed).

@joao.azevedo, @david.boddie, @Richard,
Can you please create a community Wiki for all Purism products, so we don’t have to keep repeating this stuff in the forum. We have a community wiki for the Librem 5, but we need one that covers all of Purism. Preferably, it needs to be located in a place where an ordinary person will find it, rather than having to look under https://source.puri.sm/

PINE64 has a general community wiki and Purism needs one as well.

Sure I’ll bring up the want of a central community wiki internally. Just note if we were to do one, our sysadmins are amazing but pretty busy (general work, Librem One upkeep and a fun new internal system) so unfortunately it won’t be tomorrow. Also just for some context for where things are at right now.

PureOS is an FSF endorsed free software distro so we have separated bug tracking and official wiki. Please see this page on the GNU/FSF website for more info: https://www.gnu.org/distros/free-distros.en.html

Right now we currently use git for internal documentation writing, commenting and updating on both our Dev Docs & regular Docs. So it can be a bit slower to update than a wiki but changes are track-able and the devs love the workflow since they’re writing the docs.

We did toss up a Wiki.js years ago but it doesn’t allow for community contribution and hasn’t been touched in years. I am personally leery of the cost (for sysadmins and support team) to install and maintain something like MediaWiki but can be swayed.

Ideas, options and recommendations welcome. Would probably warrant its own thread if someone wants to discuss further.

To be fair this is on the OP’s girlfriend’s HP. And so not a Purism product. I don’t really see Purism having any obligation to helping folks run PureOS on nom-purism hardware.

Purely because they don’t have the manning for such a charity cause.

I don’t really see Purism having any obligation

Definitely no obligation - but it’s up to Purism to decide what position to take regarding running PureOS on non-Purism hardware. They could decide to discourage it, or encourage it but not help, or encourage it and help as time allows. It depends on their market positioning, their strategy.

For me though I think @amosbatto’s point was that it just wastes everyone’s time having the same question asked over and over.

Specifically, I would make the point that the WiFi adapter is the one thing that will cause the biggest problem, if any, because you often can’t directly download the driver. It’s Catch 22.

So we might as well have a canned answer that gets everyone over that hump.

I guess it really depends on your point of view.

Purism’s view is that FOSS software and hardware are the only answers. I strongly disagree, but that is beside the point. They aren’t going to be fulfilling their goals if they help people to do the opposite. It also cuts into their profits if they encourage people to use PureOS on non-purism hardware.

However, the point of view I’m really talking about is the amount of work the individual with the question must do. If the OP would have, for example, done a simple search on this forum or this information, they most likely would have been able to figure this out on their own. However, the scope of this thing, is in general far beyond what most people are able to do.

The truth is, if simply installing Linux and using it doesn’t work out of the box, it is beyond most users abilities to fix. Linux is not intuitive in anything other than web browsing, checking mail, and using other applications. I mean adding a repo is difficult for the average user, let alone finding a device driver and installing it.

I think making a wiki for PureOS is just a mountain of work, that no one is ever going to scale. It is also a rabbit hole of near infinite depth.

If I were Purism I wouldn’t touch it with a ten foot pole.

I think making a wiki for PureOS is just a mountain of work, that no one is ever going to scale. It is also a rabbit hole of near infinite depth.

If I were Purism I wouldn’t touch it with a ten foot pole.

I think @amosbatto’s intention is that he puts this content in there. It just needs a sensible, findable place for the Wiki to reside.

Let me just echo what @kieran just said. I don’t expect Purism to put much work into adding content to the wiki. Purism has its official documentation where it should concentrate its efforts.

The community wiki is for all the unofficial stuff that we as the community want to add. Some of that will be how to install proprietary stuff which isn’t in the official PureOS repo, but some of it will be things like finding a replacement charger on eBay or how to compile some program.

In my case, I get really annoyed by having to take the time to write something up and then having to repeat it over and over on the forum. A wiki is simply a more logical way to organize information. I took the time to create a FAQ, benchmarks, component list, tested accessories and cellular providers page for the Librem 5 wiki, so Purism should take advantage of that passion on our part for its other products as well. It will save Purism staff a lot of work as well, because they don’t have to keep answering the same questions over and over, such as how to enable the Bluetooth.

The more people installing and using PureOS means that there will be more potential customers for Purism in the future, so it is actually great marketing for the company.

Did i miss an command?nothing seems to have changed 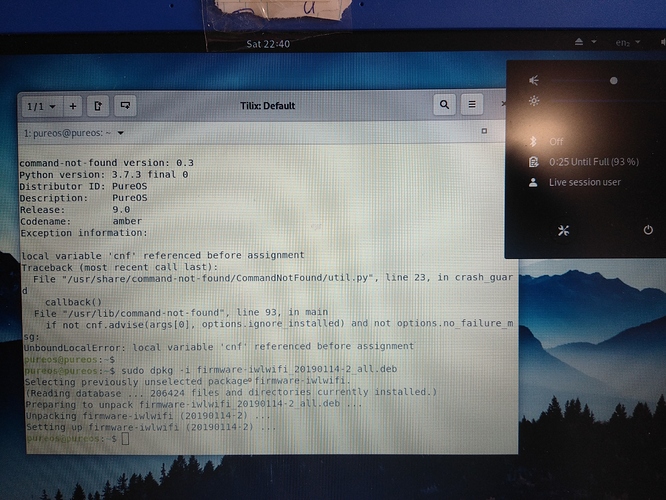 As well (as all is based on OP’s feedback), he needs to check if already having installed (in addition to firmware-iwlwifi) initramfs-tools_0.132pureos1_all.deb:
sudo apt install initramfs-tools

P.S. @Gavaudan, to me it just looks like that OP booted (from USB flash media) PureOS and actually didn’t make any (real) install of PureOS so there is nothing new (Live session user, as posted above) to reboot into at the moment, but I might be missing something anyway (not really focused to, at the moment). And, as @kieran already said (narrowing this quite a bit down here):

even if PureOS already installed on this HP Stream laptop (on top of non-UEFI/legacy BIOS mode).