Will the Librem 5 be a white elephant or the first in a wave?

Wow good research @amosbatto . I had not seen this post yet.
I can confirm that the Librem 5 has more unique things inside!

I can confirm that the Librem 5 has more unique things inside!

About that very excellent list on the top post: first camera phone info may need to be updated. Those have come along way in 22 years.

People like you wrote EXACTLY THE SAME WORDS YOU JUST WROTE: Oh, it can’t be done, it will be too expensive, everyone needs windows on laptops, and on and on and on …

I posted version 4.1 of my database of innovations here:
https://github.com/amosbatto/mobile-phone-evolution-database/blob/main/MobilePhoneEvolution_4.1.ods

In a couple days I will be posting version 4.3 which has been updated to include the innovations so far in 2021 and has new graphs. Strangely enough, 2020 was a stellar year in terms of innovations in spite of the global pandemic and a global decline in mobile phone sales.

I started compiling this list because companies often claim to be the first for marketing reasons, or because they didn’t know what companies were doing in different parts of the world. About a third of the time when companies have a press release claiming to be the first to release a particular feature in the mobile phone industry, I have found that claim to not be true, and I have often found inaccurate info on Wikipedia as well. When LG announced that it would no longer make mobile phones, I read articles and watched videos listing all the innovations that LG had introduced, and nearly every one they listed were introduced first by other companies, but they missed most of the innovations that LG actually had introduced.

Lots of companies claimed to have the first camera phone. Kyocera, Samsung and Sanyo were first in different markets, so they can all make their claims. The first that I can find is an attachment camera sold by Kyocera in 1997 that was designed to be hooked on a phone. It is really sad how the iPhone destroyed the Japanese mobile phone industry, because it introduced a large number of innovations before the rest of the world. Today, about 65% of innovations are introduced first by Chinese brands, and there are no longer regional tech silos, since everything is now globalized. The Librem 5 is a weird outlier that bucks many of the major trends in the industry.

Can’t wait for Chrismas, that is when white elephant gifts abound.

Or should it be Halloween, with a “wight” elephant in my treat bag?

Here is the latest version of my list of mobile phone innovations, in case anyone is interested. See the tab “PhoneMilestones” in the spreadsheet.

Here are some graphs of the evolution over time: 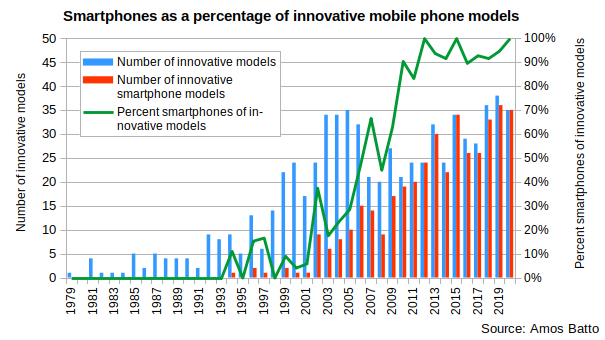 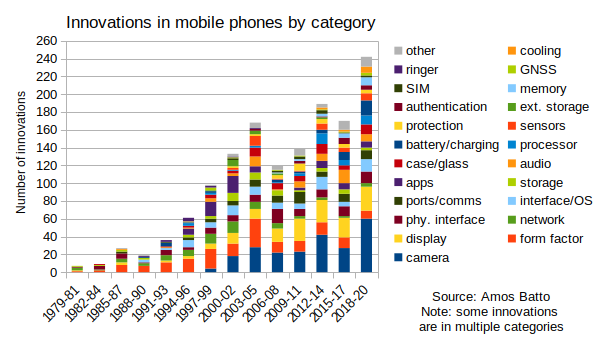 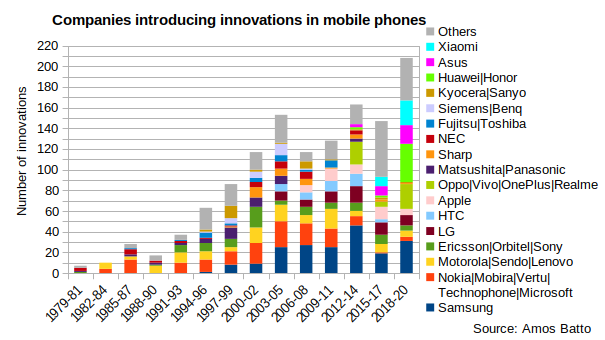 I now count 16 mobile phone models with 6 or more innovations, so the Librem 5 isn’t as unique as I first thought. I have updated the community FAQ with this info: https://source.puri.sm/Librem5/community-wiki/-/wikis/Frequently-Asked-Questions#15-how-innovative-is-the-librem-5