I’m currently on $15 a month why would I pay $99!
I’m in Australia with 3GB and I went for the cheapest. But if you go to a USA website and look for an unlimited plan it is VERY competitive with Purisms offer. 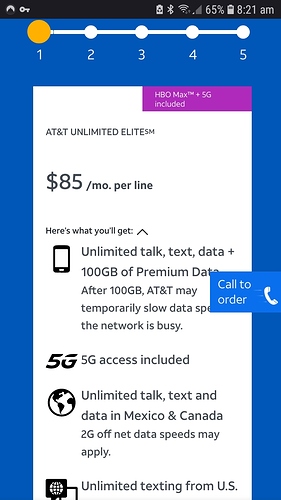 If your only requirement for a phone plan is a low price then you likely won’t be interested in a hypothetical future Purism offering in Australia. And that’s okay!

I think you missed my point.

It’s more for the people who complain about AweSIM being expensive. The $85 plan only comes with 100GB. So $14 more you can get unlimited.

Also, I’m in Australia so I cannot compare it to anything here and why I chose a USA plan to compare. Telco costs vary widely between countries, so we cannot compare what we have to something in another country.

A lot of people complain because the product does not fit them. If you’re not a high data user, you can not complain about the price of an unlimited plan.

I was hoping people would see the absurdity of my situation without me spelling it out. But that is the situation people are complaining from, so it was lost.

I wanted others to see how competitive this product is to a giant blood-sucking company’s product.

It’s more for the people who complain about AweSIM being expensive.

I can see both sides of the argument. T-Mobile offers unlimited plans for $60, $70 and $85 per month. The vast majority are going to select the $60 plan, so paying $39 per month extra for AweSIM is a pretty steep price difference.

On the other hand, AweSIM uses either T-Mobile or AT&T networks, so customers can chose which network covers their region better. The big difference between the T-Mobile unlimited plans is how good is the hotspot. If the Librem 5 enables hotspot, then it won’t have any restrictions on the use of the hotspot, so maybe Purism’s service will be better than T-Mobile’s unlimited plans, but at this point the Librem 5+AweSIM is worse because there is no hotspot functionality.

In addition, the T-Mobile plans offer calling from Mexico and Canada and free SMS worldwide and its $85 plan offers movies in airplanes. AT&T is offering 5G with its $85 plan. In these aspects, AweSIM is worse than the competition. Another issue is that Purism isn’t offering deals for multiple lines, which makes AT&T and T-Mobile substantially cheaper than AweSIM for people who need multiple lines.

It’s more for the people who complain about AweSIM being expensive. The $85 plan only comes with 100GB. So $14 more you can get unlimited.

What AT&T and T-Mobile do with their unlimited plans is they limit the speed after the user consumes more than 100GB per month, but the plan is still unlimited, and they say that they only limit the speed during times of peak traffic.

AweSIM will also limit the speed, according to its announcement: “Peak data users may be compressed to peak average.” Since AweSIM is using the AT&T and T-Mobile networks, it is probably using their same rules about how to limit network speeds, so I doubt that there is any difference.

The reality is that the majority of people don’t pay $99 for month for their cellular service, and from that perspective, AweSIM is expensive. The price tag will limit the number of people who will pay for AweSIM. Hopefully, Purism will be able to offer cheaper plans in the future with network limits that can appeal to a wider segment of the market.

Nonetheless, my chief concern is that Purism has enough funds to be able to pay for development of PureOS/Phosh to make mobile Linux a viable alternative to the Android/iOS duopoly. If Purism can make a profit from AweSIM, then I’m all for it.

Yeah. From what staff have been saying on matrix channel, I think this has the potential to change the game. Think back to when the iPhone first came out, data and services were terrible. People couldn’t think of a reason you’ll need 2GB of data. Now people stream music and play video all day. But people cannot think of a reason you need 200GB of data. With a Linux phone you can have a portable server, you can constantly sync large files, you can have data convergence! What possibilities will that bring you?

The others have more items in their offer, but most of the time people don’t use it, it just helps with marketing. You’ll only get T-Mobile or AT&T, not both. They never said they’ll disable hotspot or teathering. I don’t think second tier providors will get access to the 5G network for a while, but you’ll need a 5G phone in a 5G area with 5G signal. Still Awesim is more expensive, but the items in Purim’s offer make the price worthwhile for you?

By redefining unlimited as 50GB or 100GB + trickle charge, you can say nearly every single plan in Australia as unlimited. Unlimited here means that the service is unmetered, you never hit a wall. By AT&T and T-Mobile’s redefinition, you can have ‘unlimited’ with 3GB of preminium data and then you’ll be slowed to 2G service. Unlimited!

From what I undersand the others have a limit for the month, then for the remaining time you’ll be slowed. For Purism, it’ll just depend on what their definition of peak is? Only when there is congustion on their network, will they limit the high data users before others?

I’m guessing their contract would be like what ISPs get with NBN Australia. 100 Mbps pipe they’ll share between 50 customers. Peak would be when the 100 Mbps pipe is full and people would start to get throttled. So to make it fair they’ll make the high data users be throttled more then the normal users. The contracts will be more complex then this case.

For Purism, it’ll just depend on what their definition of peak is? Only when there is congustion on their network, will they limit the high data users before others?

I’m guessing their contract would be like what ISPs get with NBN Australia. 100 Mbps pipe they’ll share between 50 customers.

From what I understand, MVNO’s don’t operate like ISP’s, because cellular networks are distributed, so it isn’t like you are just buying a single pipe and distributing among your customers the available bandwidth. Maybe Purism is buying X amount of TB per month (or X amount of bandwidth) and redistributing, but I think it is more likely that AweSIM will operate according to the rules that AT&T and T-Mobile use for their own customers. I say this, because I have read comments from MNVO’s that they have zero ability to monitor or control the network and can’t resolve their customers complaints, so it doesn’t sound like they are making the decision about how much bandwidth to allocate to each customer.

However, this a question that only Purism can answer, so hopefully a Purism employee will give us an official answer as to what it means by “peak data users may be compressed to peak average.”

To help people who want to do a comparison, I have created a table that compares the unlimited plans:

I think Purism needs to clarify what is its hotspot policy and when traffic is deprioritized (slowed down).

because there is no hotspot functionality.

It’s not as user friendly as I would like it to be yet, but I’ve definitely used my Librem 5 as a hotspot already

I’ve seen Kyle say that given how the network sharing works in PureOS, the network carriers cannot tell the difference between regular usage and hotspot usage. Sounds to me like there would also be no data limit on hotspot usage in that case. But it would contribute to whatever traffic bandwidth restrictions affect the plan as a whole (and that I have not seen clarified yet).

Hopefully this won’t mean something like “if we can’t tell, then it’ll all be treated as hotspot traffic.”

Thanks @amosbatto now people can actually compare the AweSIM to similar plans. I think tethering would not be a problem on the Librem 5 because the modem cannot tell the difference. But what happens when the AweSIM is placed in an iPhone or Android? Here the network provider could tell if tethering is being used.

I think it’ll depend on how far Purism is along in the negotiations with AT&T and T-Mobile. They may be the ones to require Purism to limit tethering if they can detect it. But Purism won’t care how you use your data, as long as they can see your usage during peak times.

This video about AweSIM really annoyed me. See my comments to the video by going to the site.

I added the Mint Mobile Unlimited Plan to the table above, so people will understand the difference between cheap “unlimited” plans and real unlimited plans.

I’m with AT&T and can confirm my plan does not include any hotspot allocation yet because reasons, my phone doesn’t tell them it’s hotspot traffic so it’s treated as regular data. I would expect the Librem 5 to have the same result. AT&T can only tell you’re using hotspot if your phone tells them.

I imagine you have something other than the stock android on your phone then (or some other workaround)? Last time I had at&t it wouldn’t let me turn on the hotspot because I wasn’t paying for it. Still, its good they’re not watching user agent strings or something like that.

I have a T-Mobile phone ported to AT&T that used to be but is no longer rooted (reflashed the stock image) so I’m not 100% sure if it’s just the port or the fact it was once rooted or what that makes it work when it shouldn’t which is why I didn’t dive into it too much. Also this phone is so old that it isn’t actually recognized in their system as a specific device just as a generic smartphone so that may contribute as well.

Once again, I seem to have run into the Purism trolls on r/Purism over the AweSIM. Check out their comments: https://www.reddit.com/r/Purism/comments/j5mubm/should_you_buy_the_new_librem_awesim_privacy/

Presuming the statement is true (but refers to WiFi), can you still tether with a USB cable?

Of course, why not? You can even tether by Bluetooth. It’s just a small PC, you can configure its networking however you want.

Thanks. I was prompted by my experience with the Air Force’s TENS linux, it wouldn’t tether, but it would happily connect to WiFi. Must be due to their paranoia about USB.

This video about AweSIM really annoyed me. See my comments to the video by going to the site.

@amosbatto - I am a fastidious reader of your analysis. I find it thoughtful and compelling. And, as much as one can be, objective. Thank you for replying to the video creator and using factual evidence to produce a strong counter-reply. Nerds, especially libre nerds, have (in general) a really annoying habit of tearing down just about everything but their favorite distro du jour. It’s a subcultural disposition I would like to see weaken in strength. And fact based analysis, I believe, goes a long way to addressing that.

I am curious if one were to grade the responses to Librem’s products from their own buyers on the forum, how many responses are actually welcoming. By my own perception, it appears to be a rough 50/50 split. It’s as if no good deed goes unpunished.