Let’s not talk negatively about someone on a forum. Bass20 posted asking about degoogled phones and not about your opinion of someone.

Maybe it isn’t relevant or maybe it is. Techlore did a 50 minute video on Daniel Micay, and he concludes at the end of the video that Micay’s attacks on other projects does effect the quality of GrapheneOS.

The lead dev for GrapheneOS is a real jerk–I have had arguments online with him, and he seems delusional and paranoid.

As I commented on a different thread, his behaviour undermined my confidence in the project as well.

I’ve conversed with him numerous times and have had zero issues with him. I have, however, witnessed trolls and disrespectful people go after him on more than one occasion.

I have, however, witnessed trolls and disrespectful people go after him on more than one occasion.

From what I have read, Micay has made a real contribution for people who want security and privacy, so I don’t want to knock his work. However, it is worth reading how he responded to me on Reddit, and make up your own mind whether Micay was being trolled or he was creating needless strife.

PS: In case it isn’t clear what happened, the original poster (whose post has now been deleted) mentioned Micay in a way that made it sound like he was Madaidan, who wrote the article which criticized Linux’s security. When I googled “madaidan”, I found contributions to GrapheneOS, so I mistakenly assumed that Micay was Madaidan. In my original response, I wrote “Daniel Micay writes:” and then quoted sections of the article. Micay then accused me of “character assassination” for attributing the article to him. You can see how he responded when I tried to apologize for my mistake.

I don’t know your use case, but I like the Outlook progressive web app on my degoogled device with the login saved. There arent notifications, but as long as you’re OK opening the PWA to check for messages it’s not bad.

I too have a GrapheneOS device and other than wishing the device itself had a bigger battery it worked well for my needs and I liked the install better than LineageOS (depending on the device).

Nor do I but I managed to see the comments. The behavior was part and parcel of what I saw when I was trying to decide upon using GrapheneOS. It is worth quoting below (as a screen shot). His behavior doesn’t mean that GrapheneOS is bad, but it does mean that it requires a special type of collaborator who, in my experience, is rare. So I would argue development is slower than it would be if he were less, let us say, combative. I also asked myself, given the options that I have, do I want to depend upon someone like this; my answer was ‘no’. 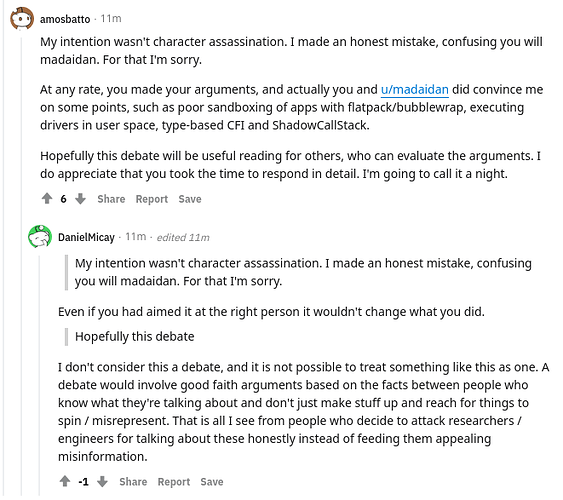 Nor do I but I managed to see the comments.

Must be nice. It wanted me to log in.

So I would argue development is slower than it would be if he were less, let us say, combative.

It actually isn’t. GrapheneOS has a solid development team.

GrapheneOS has a solid development team.

I didn’t suggest that it was not, I just suggested that personality type required is more rare than that needed to work with someone who is less combative.

You may not have suggested that, but “So I would argue development is slower than it would be if he were less, let us say, combative” can be read as that you were implying it.

So, in short, degoogled phone seems my best option?

In my opinion, installing an AOSP-derivative (CalyxOS, GrapheneOS, /e/, LineageOS, etc) and only using software from the F-Droid repo is the best option for most people. I found that I didn’t need to install microG, since I avoid using most of Google services/apps, but it is a good option for people who can’t live without them.

However, people say that SailfishOS is very functional, so another option is to buy an Xperia X, XA2 or 10 and install it or buy it preinstalled from https://buy.jolla-devices.com (if you live in Europe). If it doesn’t work out, you can always install LineageOS on the Xperia.

@amosbatto, I believe that should be jolla-devices. This doesn’t appear to be run by Jolla themselves, is that correct?

can be read as that you were implying it.

It could be, but now that I have clarified it, it does not (which is why I responded to your comment).

I believe that should be jolla-devices . This doesn’t appear to be run by Jolla themselves, is that correct?

Thanks. I fixed the link in my previous post. I can’t find any info about who runs Jolla-Devices, but considering that it sells phones with Sailfish OS, Meego and GrapheneOS preinstalled, I’m guessing that it has nothing to do with Jolla Ltd, which would only be interested in promoting Sailfish OS devices.

It is convenient to have a sellers like Rob Braxman in the US and Jolla-Devices and https://esolutions.shop in Europe that will sell phones with an alternative OS preinstalled for people who don’t want to deal with the hassle. Considering how many mistakes I made when I got started, it is probably worth paying the markup that they charge for most people who aren’t technical.

A trick I learned on forums.puri.sm is to change the www to old on reddit links.

… in Europe that will sell phones with an alternative OS preinstalled for people who don’t want to deal with the hassle.

Yes, but not to forget existence (great work in progress) of the currently available ShiftOS 3.2 L (Light BETA Version from 20210415), available to SHIFT6mq owners (as I know someone with it) through OTA update. Other applicable degoogled OTA updates (from 20201126) are related to SHIFT5me and SHIFT6m (within Europe only, I think but not sure).

Yes, but not to forget existence (great work in progress) of the currently available ShiftOS 3.2 L

Could you tell us a bit more about it (maybe in a separate thread)? Thanks!

I’ll put in another plug for /e/ and their degoogled LineageOS fork. I’ve had /e/ on my main driver, a Moto G4 Play (harpia) since June 2019, and it works well. They are currently selling pre-installed /e/ on refurbished Samsung Galaxy S9/S9+ phones for the US market for $380/$430 (at the above-mentioned https://esolutions.shop). I have had zero problems using /e/, it’s very clean and bare-bones. Installing it on the harpia was a typically fraught process, though if you’re interested in a phone as old as the harpia, I could probably talk you through it.
@codenomad and @nimji, I was able to get Outlook mail working on /e/ using Librem Mail’s Android app, and was able to get Outlook calendar support working with a combination of DAVx5 on my phone and the open source CalDav Synchronizer plugin for Outlook on my work computer.