Enough is enough with Firefox

It updated today without asking my permission to version 89.0 on L13. And suddenly the tabs are above the location bar. And there is no way to move them below the location bar as I have been doing for decades. Maybe there is some kind of solution but it is not readily available and there is no extension.

It will not be far away before they remove my menus for the hamburger nonsense
(like the “great” ribbon menu in Word where users were trying to see how to save files…) and force me to follow what they think is “innovation”. I feel that they just play with my nerves.

It is time to find another browser. Any suggestions are welcome.

Mozilla is super annoying about constantly changing (and some, including me, say ruining) the UI for no apparent reason. On my Linux Mint machine I set the updater to ignore Firefox for the time being, beginning with FF 89, because of what I read was coming.

It’s apparently still - temporarily - possible to revert some of the damage. The site ghacks.net, which is a good place to keep watch on impending Firefox changes, has the instructions: 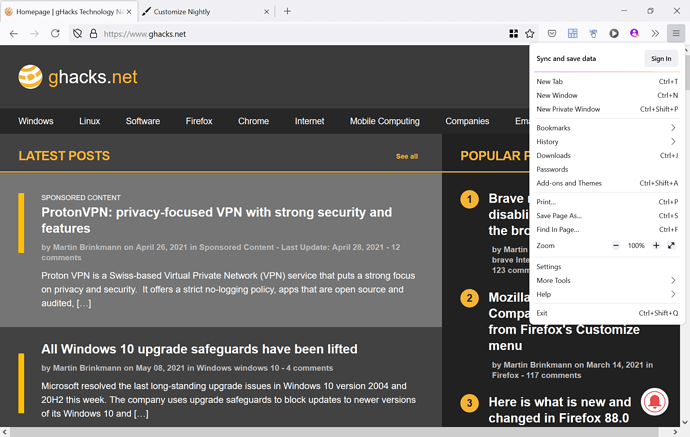 How to fix the Firefox 89 user interface - gHacks Tech News

You could switch to Firefox-ESR for a while, although it will also get the Proton UI eventually.

P.S. I find that Pale Moon is a good, and familiar, alternative; it’s based on Firefox code, although it has diverged a bit…not as much as Firefox has diverged from itself, though!

With the recent update to the UI, going to ‘about:config’ and setting browser.proton.enabled to false made me a lot happier.

Use less Pages, filter some news or social media with your own scrips and command line search engines.

I thought someone should create something like a browsing manager which organizes tabs (as lists, trees or groups), sessions, windows and tasks.

That should separate the web browsing management from the rendering. Partially that could already be done with bookmarks, but bookmarks have their own problems.

By the way: never build a bookmarks collection on Firefox mobile or you get locked in as there is no export function.

P.S. maybe that thing can become a service so that you host it on your powerful home server and surf remotely from your less powerful mobile devices.

Looks like another non-UI change is in the pipeline too, from that second link:

Firefox 90 will be released on July 13, 2021. It will be the first version of the browser that does not support the FTP protocol anymore.

I don’t use FTP much at all, but it doesn’t seem like that long ago that I needed to download something and FTP was the only option offered.

Thank you all for the replies!

Firefox 90 will be released on July 13, 2021. It will be the first version of the browser that does not support the FTP protocol anymore.

Unbelievable. They are not serious.

OK, so what’s the big difference?

There’s webkit, owned by Apple. They don’t like open source but at least they do accessibility.
Then Blink owned by the largest spy/ads org in the world.
Or back to Gecko owned by a non-profit, but glued in Silicon Valley. Firefox is stuck in a hard place, with their financial supporter only giving to keep anti-trust lawsuits away.

I think Firefox should allow and support their engine to be used in other browsers and apps. Gnome uses webkit a lot and they then could switch to an open source business.

I don’t use FTP much at all, but it doesn’t seem like that long ago that I needed to download something and FTP was the only option offered.

Use FileZilla instead. GUI. Works well.

There isn’t a whole lot of need to have FTP integrated within the browser.

I thought someone should create something like a browsing manager which organizes tabs (as lists, trees or groups), sessions, windows and tasks.

Vivaldi does something like this with tab stacks. And you can put the tab bar at the bottom (or left, or right).

I hope that this helps.

If all you’re concerned about is functionality, things like Palemoon or Waterfox/Waterfox Classic or various other Firefox forks that have a focus on customization will serve just fine except maybe a few websites won’t work.
But if you’re more concerned with the balance of power in internet flamewars and don’t want to be on the ““wrong”” side, the only browser I know of whose users haven’t been the subjects of politically charged insults the likes of which firefox users have to put up with ever time Mozilla changes something, is ungoogled-chromium.
Of course, you can’t put the tabs under the location bar that way.

I’d be interested in the Brave Browser if it weren’t based off of Chromium. I dislike Chrome but have little against Chromium itself. I just value browser engine diversity too much and don’t want it to be all Chromium, everywhere you go.

I only use FTP on the command line anyway to my 30 year old legacy CPU in my garage. Using it in a browser was like “meh”.

I think Mozilla’s signaling of their political opinions signaled all I needed to know about this “tech” company. They have no problem asserting their opinions, which makes it no surprise that their GUI opinions are taken as more important than their users.

I don’t want to take this out of context, of course. Mozilla has EVERY right to make their product how they wish. I wouldn’t change that.

I disagree with their ideas and their development and thus use a different browser.

Out of all of the browsers out there, while I use Brave, I do hope that Gnome Web continues advancing. I think it is a pretty nice browser that I’d love to see grow.

I think Firefox should allow and support their engine to be used in other browsers and apps.

It was called Servo.

I just value browser engine diversity too much and don’t want it to be all Chromium, everywhere you go.

This kept me from switching to brave for a while, but I eventually got to the point where I felt that firefox as a project was not high quality enough to merit supporting.

A few years ago, I started getting more creeped out by the money-making data practices at firefox (opt-out instead of opt-in data collection, generating revenue from people’s searches, etc).

As a web developer, I came across multiple times when firefox had significant UI bugs, community members reported those bugs, and firefox closed the bug reports and said essentially “we’re not going to fix that.” I was shocked, and I think it told me a lot about the philosophy at firefox, how the project is run, and why it tends to be a low quality experience relative to other browsers, including brave.

I guess all I want to say is that you don’t need to sacrifice your happiness for the sake of browser diversity. Firefox isn’t worth it. I have been impressed by brave so far, and I think it’s a good project.

As a note which some may find ironic or amusing, I use Tor for almost all of my browsing, and it’s only when Tor is blocked for a necessary site that I use brave. So, I am still using a very stripped-down version of firefox that Tor is based on. When I can’t use Tor, I use brave.

I don’t understand all the love for brave. It is spyware bot net garbage. Librewolf is pretty based if any of you want to try out. Go to the link below for some reviews on web browsers.
http://spywareitdaiuyfo2sqb5vsg7mek5cjabdr73luhnda57t2hyuzg7yyd.onion/articles/index.html

Funny, the site is blocked by Brave LOL