Graph of the battery charge level

My old beloved Ubuntu phone BQ E4.5 has a nice graph of the history of the battery charge level of last hours, see attachment. Do we have something similar in our L5? Thanks. 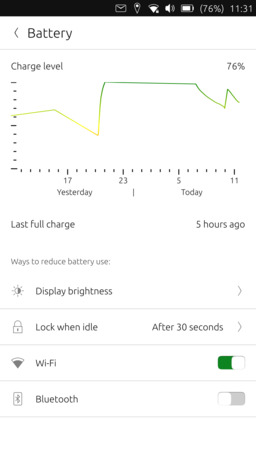 gnome-power-statistics works - although it’s not adaptive and you may want to apply this patch to get better data resolution: https://gitlab.gnome.org/GNOME/gnome-power-manager/-/merge_requests/17 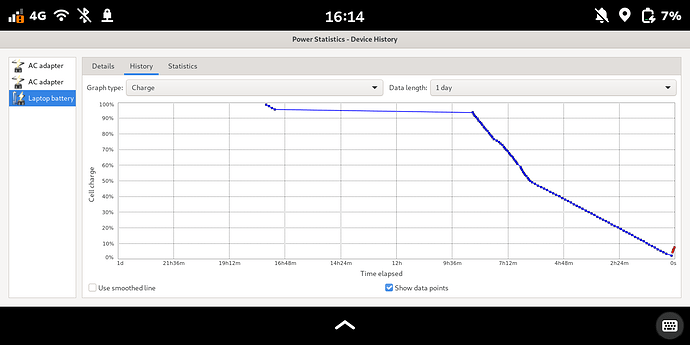 Thanks.
The background of my question is: I was last night sitting in my terrace listening music, with the Goodvibes app a mp3 stream. I checked the battery state as 41% and though, well this will be enough for an hour. Short after this, a matter of a few minutes, at 22:20 CET the L5 went down due to 0%. A reboot showed 0% at this time 22:20 (I know the time exactly, because uptime now at 10:20 CET shows 12h.

Why the gnome-power-statistics app only shows the last 4h 12m history and not at least the history from the reboot at yesterday 22:20 CET?

Maybe the battery charge level calibration is not right.

Maybe the battery charge level calibration is not right.

How this could be checked or fixed?

Why the gnome-power-statistics app only shows the last 4h 12m history and not at least the history from the reboot at yesterday 22:20 CET?

Some advanced approach/direction (if and when needed) of external Librem 5 battery recalibration is already shown here: Bought broken batteries for Librem 5.

EDIT: @irvinewade, I’m anyway quite sure that you already provided solution here.

I’ve applied the “fix” some days ago. But last night, the unused L5 slowly drained the energy and then lost in the last five minutes around 30% of its energy. See picture. Why? 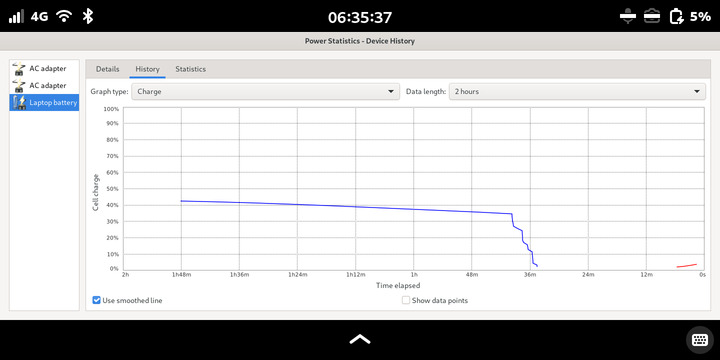 Because of some do-not-match numbers? In short, if your Librem 5 turns off when you take its BPP-L503 battery out this means that you are either using wrong cable to charge this battery or even that you are using wrong power supply (or both) there. If and when you use reliable charging equipment please follow this:

Battery dropping from 40% to 0 in a few minutes

Now turn off your Librem 5 with: sudo systemctl poweroff, insert BPP-L503 battery back into its slot and wait until red LED light off, at phone consumption between 0.08A-0.09A (before this procedure you can still use and charge your phone to almost full). From there you might proceed as you think that suits there better (but I’ll disconnect power supply and power on Librem 5 normally). There are some other commands that I use but: upower -d should do (check/note this output before, when battery out, and after booting your phone back again: 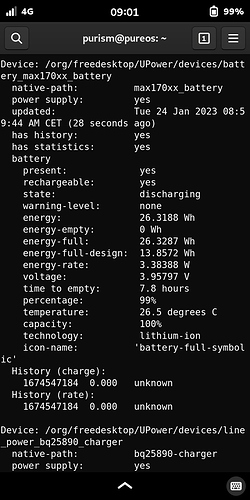 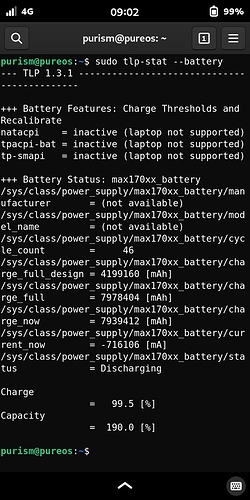 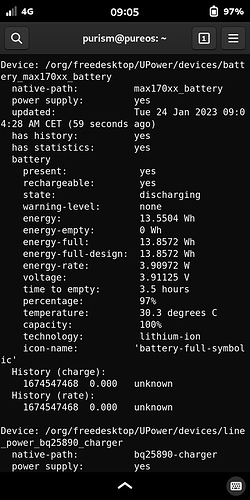 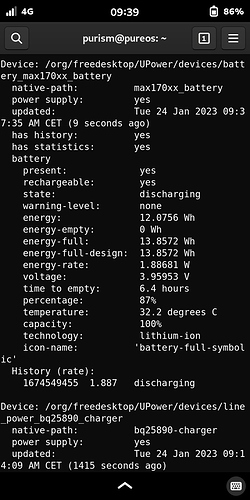 There are two things at play there - gauge calibration and its configuration.

The kernel is supposed to automatically configure the gauge with correct values for a given hardware revision if it’s uninitialized, but there are cases where you may end up with incorrect ones being used (for example, if you use boot current versions of Jumpdrive as the first thing after taking the battery out and don’t take it out ever again).

To easily check whether your gauge configuration is right:

(Chestnut value is the same as Birch)

So that’s the first thing to check. The other thing is that the gauge uses plenty of heuristics in order to calibrate itself and make its readings more accurate. Sometimes this calibration may end up being off, which can be further amplified by certain usage patterns.

In any case, the simplest way to reset both gauge configuration and calibration is to turn the phone off and take the battery out for a moment. Put it back in and you’ll end up with a reconfigured gauge with no calibration, so then give it a chance to learn about your battery for a full charge cycle or two - and then avoid taking your battery out to not reset calibration data again.

If sudden race-to-0 occurs often despite of letting the gauge calibrate for a while, it may be a sign of an aging battery.

@guru, today I have decided to share instruction that will help you, your OS and in particular your Librem 5 battery. Connect power supply of your trust to the Librem 5, remove BPP-L503 battery, execute: upower -d within still opened Terminal, skim this output and execute: sudo systemctl poweroff. Wait for PureOS to shut down your device, insert BPP-L503 battery back into its Librem 5 slot and turn/boot on your Librem 5 again. Read/check if upower -d tells you the truth now.

Today I’m not posting any upower -d screenshots before and after …, rather outputs for comparison (but you are welcomed to do so, up to your own goodwill). energy-full and energy-full-design values are the very same now?

EDIT: Final adjustment of the BPP-L503 battery calibration (through Librem 5 own HW/SW) would involve:

Connect power supply/bank of your trust to the Librem 5, remove BPP-L503 battery, execute: upower -d within still opened Terminal , skim this output and execute: sudo systemctl poweroff . Wait for PureOS to shut down your device, insert BPP-L503 battery back into its Librem 5 slot

Now wait until red LED light turns off before booting your Librem 5 into PureOS GUI again.

EDIT II: In order to settle down, repeat above procedure until you get to the point that you boot back into 100% of battery capacity and get there real (useful) capacity (energy-full at almost 4.20V) values (another phone battery output, correct/precise upower -d output, shown here): 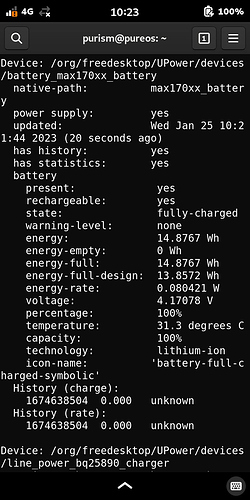 EDIT III: sudo systemctl reboot needed as final step to get … under still having power supply/bank connected there. Now I can go to sleep well.

Another BPP-L503 battery in process of being trickle recharged (inside of the Librem 5) to 100% of its real capacity (at 4.20V). @guru do you want that I post related screenshot (when this “job” done) for comparison of another Librem 5 battery (within another phone) energy-full value, from upower -d, as well? 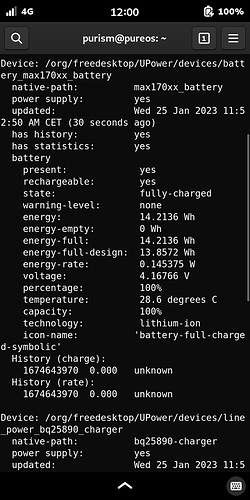 I did what you (@dos) adviced and after charging to full (red LED off and 100%) upower-d shows:

Voltage there is still too low (way below 4.20V, meaning values are still artificial). Just while energy-full value should be slightly higher than energy-full-design value (design value will not and should not be changed). Therefore, when red LED light off, try to reboot into 100% battery capacity, in order to get calibrated values there (and do not have to remove Librem 5 battery again).

In short, I think that your upower -d output, here posted one, still isn’t perfect, yet way better as what you have had there until now.

This is how it discharges after the first full charge after @dos’ procedure: 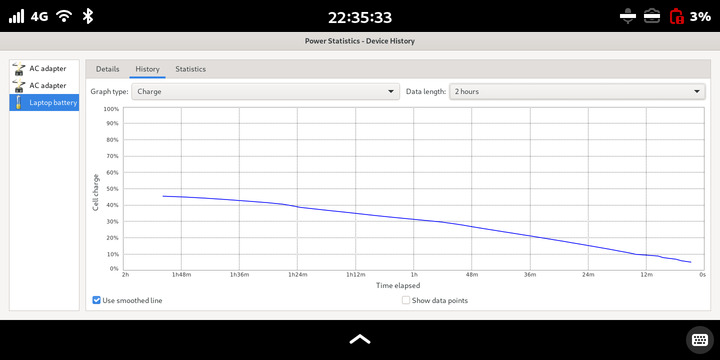 As your battery looks (not that I’m some expert) like slightly degraded there, please ensure that some power supply/bank is still connected (you’ll be there where you want to be when state outputs fully-charged, as my last two screenshots above show) and:

Now wait until red LED light turns off before booting your Librem 5 into PureOS GUI again. 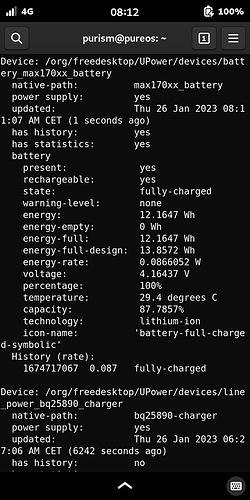 As your battery looks (not that I’m some expert) like slightly degraded there, please ensure that some power supply/bank is still connected (you’ll be there where you want to be when state outputs fully-charged , as my last two screenshots above show) and:

This means, I should charge the L5 to full while it is switched off. Right?
The exact procedure to follow in the sense of

is not very clear to me.

BQ25890 works by itself during reflash process, under Jumpdrive … either when connected to some computer USB port and where BPP-L503 battery cell actually discharges itself (at slower rate, yet discharging while needs to add above 0.47A necessary power that i.MX8 MQ and its periphery are requesting in order to successfully complete the job/task):

After some more investigation it seems like the dock is providing less power than the phone is consuming, so it’s technically true that the battery is discharging (at the same time as it is being charged).

or even when actually charging this Li-ion battery as connected to adequate power supply/bank/dock, isn’t it?

And yes, I already gave + to @dos post here for some reason:

There are two things at play there - gauge calibration and its configuration.

The charging after that in powered-off mode is just to avoid power budget interference with the charging, charging should then take place form 0% to 100% in one sitting and with the full charge current (which could get reduced otherwise if e.g. an OS is running).

If you use the provided PD charger or an equivalent which is able to supply 3A, I wouldn’t bother with turning the phone off during charging since it’s unlikely that you be hitting that limit, at least as long as you won’t let it pause the charging due to high temperature.

Well, unless you do something like docking it to an external screen to play an online 3D game that uses a camera using cellular connection in a place with poor reception, then the charging will likely slow down due to power draw:)