It's a burning phone

This morning, with the phone on, and lying idle on the table for an hour or so, my readings show:

Room temperature is cool. I haven’t charged since yesterday.

Result with laser thermometer after 100% charge (same electrical outlet I always use):

And cooling down gradually.

I really think that 85.00° C reading in the display must be some kind of reporting bug.

I’m curious about this too, will link to a new thread to see if anyone has any thoughts or updates

FWIW, I have just let the phone charge from 0% to 40% at full speed (~1.6A) and the battery temperature got to 36.5°C, with ambient at around 26°C. The more charged the battery is the lower the charging current gets (it approaches an asymptote), so it usually would get cooler in later stages of charging.

After reading this topic, the 85°C thing definitely looks like a reporting issue and not an actual temperature. I haven’t seen it myself so far on any of my devices, I’ll try to keep my eye on it.

For the reference, max170xx_battery and bq25890-charger entries are somewhat confusingly named, so in case anyone wonders: bq25890-charger value is taken from the thermistor that’s inside the battery, while max170xx_battery is the internal temperature of the battery gauge chip which is on the phone’s PCB (and therefore gets warm from the SoC’s heat much easier and is actually much more related to that than to battery’s temperature).

Lol! I did wonder how the charger’s temperature could be read by the phone. But it is a superphone, after all.

“Charger” is a bit overloaded term - the phone contains a charging chip (bq25895) which is the part that’s actually connected to the battery’s thermistor (which is why it’s bq25890 driver that exports this value). From the phone’s perspective, what you call “charger” is actually a “power supply”

What about the aluminum case? The hottest area is the top half on either side. It would be great to have a measure during the charging process and after having played with some heavy software for a while. Of course I owe you one more beer

I’ll measure that for you today when I charge again. (Could you make it a bottle of Nero d’Avola instead?

Ah! This topic is getting expensive!

With wifi and mobile settings on, I started charging at 40% with the phone placed on a mostly non-heat-conductive surface (so as to avoid heating or cooling the phone’s exterior).

Thermals at beginning of charging time: 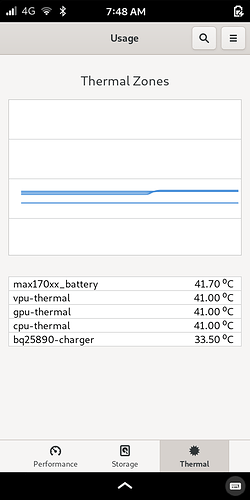 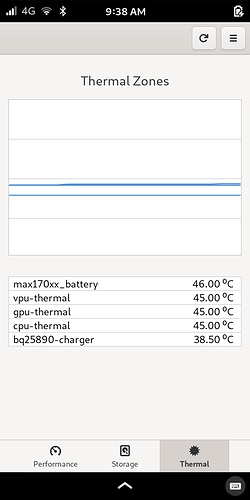 At 90% charge, I initiated the following:

A short time later, at 95% charge, the red LED started blinking, so I unplugged and took the following readings (left/right = as facing screen): 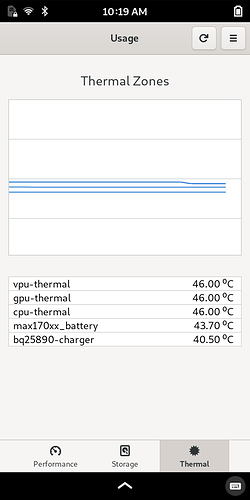 Powered off, then 17 minutes later: 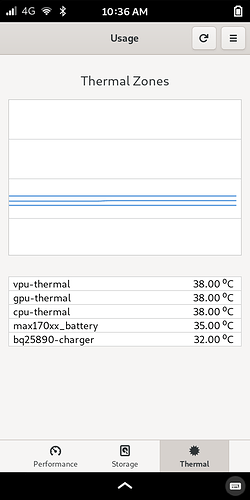 Great job!
Funny, I bet that the sides were warmer.

Maybe so. The frame is, after all, essentially a heat sink.
It was definitely starting to overheat with all those processes running while also charging.

The CPU is set to start thermal throttling at 50°C - first by limiting the frequency to 1.0GHz, and then starting at 60°C by idle injection. Additionally, the GPU gets throttled at 65°C as well. The critical temperature at which the SoC is forcibly shut down is 90°C (I have hit that in the past on devkit and some early batches when compiling some big stuff, but so far never on Dogwood or Evergreen). These values are set in the device tree: https://source.puri.sm/Librem5/linux-next/-/blob/pureos/byzantium/arch/arm64/boot/dts/freescale/imx8mq.dtsi#L246

Since the CPU throttling temperature is higher than maximum charging temperature, it’s perfectly normal for blinking LED to happen when the SoC is under prolonged load - inevitably some of that heat will start to reach the battery at some point (and charging will make it heat up on its own as well, so it will happen faster while charging). Usually it’s enough to just stop the CPU activity and lock the screen for it to resume charging after a short moment - of course that depends on external conditions since the heat has to escape somewhere, so don’t wrap you phone with warm blankets in such condition

Thanks for the explanation, @dos …good stuff. I usually try to stop charging at around 80-85%, when I catch it in time, just to hopefully extend the battery’s useful lifetime. Then again, I’m not relying on the L5 to get me through the day, like some here are.

What we need is a nitrogen-cooled phone case for the L5.

It would be good if that info could find its way into: https://docs.puri.sm/Librem_5/Troubleshooting/LEDs.html

So right now “flashing red” means “Contact Purism” whereas at least a customer could go into Usage / Thermals and decide whether the likely cause is over-temperature, or instead it is really something that the customer can’t do anything further with without contacting Purism.

You’re right, that part of the docs needs to be clarified.

FYI, these docs live in https://source.puri.sm/Librem5/librem5-user-docs-common where issues and merge requests can be created.

merge requests can be created

Merge request has been created, I think.

I’m not at all familiar with “rST” markup, so nothing flashy (pun intended), I’m afraid. (Is it just me or are there too many markup languages in the world?)

I did apply the latest updates this morning (in amber) as well as install Megapixels and related recommended packages. I’m suspecting the former, not Megapixels.

Assuming this is just a cosmetic problem, unfortunately it is going to undermine what I just wrote for troubleshooting a flashing red LED.

I don’t know whether there is something else that I need to do but the merge request is: https://source.puri.sm/Librem5/librem5-user-docs-common/-/merge_requests/39

Funny, I bet that the sides were warmer.

@fiacco, when you have time you can read output (compare it with Thermal Zones readings from Usage app) from $ sensors as well, after $ sudo apt install lm-sensors. Start readings with cold Librem 5 (make screenshot of current ambient temperatures), repeat those after some time (make another screenshot, etc.). Running $ sudo sensors-detect would be optional (not helpful here, I guess).

Also, please install Videos over PureOS Store, stream Euronews over Wi-Fi (while charging your phone) for 5 or 10 minutes (by selecting it under Channels), repeat $ sensors current reading.

Room temperature dropped around 24° in the last days, therefore L5 values are less worrying. I did some measurement, however sensors readings match the usage values, even regarding the 85°C issue. Some examples: 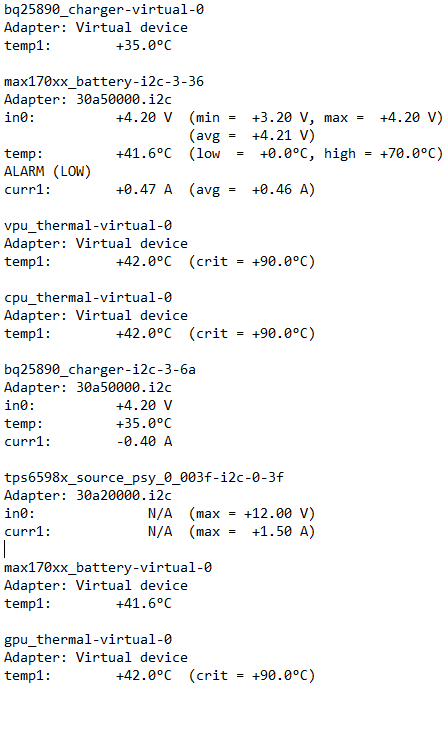 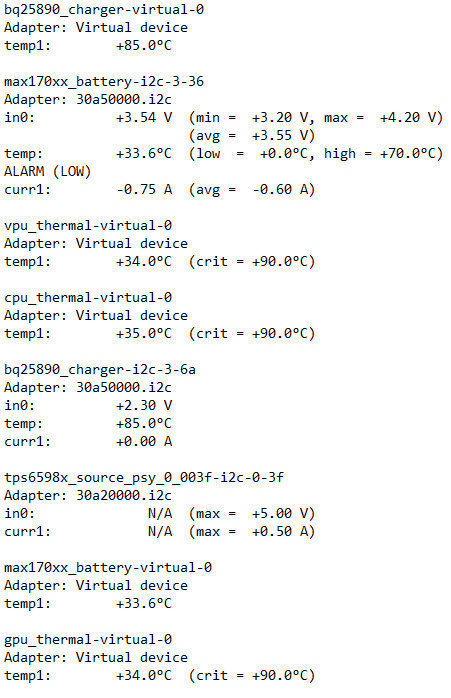