I’m used to use in the terminal app telegram-cli, bu since yesterday this connects to the server but both do not understand each other anymore.

The app telegram-desktop spills out a message from the server that one should update and if not it will not work anymore.

Telegram will force adds on the official app, and all the other apps are in need to be updated to the new API, or something like this, the FOSS Android app got updated and I read this on the changelog, here it is:

The UBports community, https://ubports.com , updated their telegram client TELEports to support the new API in tdlib 1.7.9. I’ve just updated it in my Ubuntu phone and it works.

I have here a screen shot of the version information of the app telegram-desktop – why it’s saying that it will stop working when it is the official tg app? 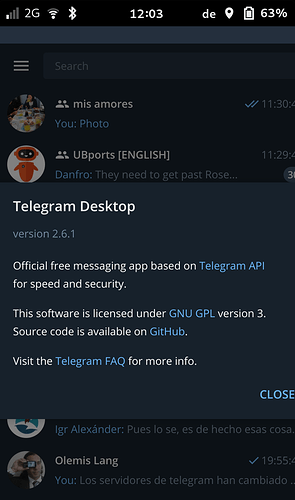 Magically the telegram-cli client works again as before in my FreeBSD laptop and my L5. What does this mean?

Hi guru, to install Telegram on Librem 5 is it possible to download it using the browser or has to be installed using Terminal?

I did from a terminal (or SSH session):

The app telegram-desktop spills out a message from the server that one should update and if not it will not work anymore.

it seems that you hit this bug: https://tracker.pureos.net/T1090

Also you can use https://web.telegram.org as GNOME Web application. It supports desktop notifications. 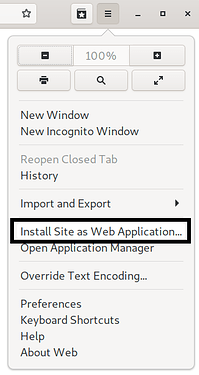 Ok thanks. I need flatpack to do this. I tried to install it (sudo apt-get install flatpack) but I got an error. Unable to locate package…
Repository address missing?

You can download and double-click on Flathub repository file, then install it. Then you search for Telegram in PureOS GNOME Software application.

Also you can use NIX to install Telegram desktop https://search.nixos.org/packages?channel=21.11&show=tdesktop&from=0&size=50&sort=relevance&type=packages&query=telegram+desktop

r/linux - Nix vs Snap vs Flatpak - what are the differences in practice?

If you are a user of telegram-desktop like me you may have noticed that a recent update broke it (the “use native decorations” toggle no longer works to fit it to the screen).

This seems to be a regression of version 4.2. I reported it here but the developers officially don’t care about Linux on mobile.

You can revert to the last working version with this command:

… and prevent updates with

So… did anyone manage to get Telegram integration working with Chatty?

I never heard about that setting, where is it? I’m using it with display scale at 175% and works pretty well (unfortunately the display scale is reset at each restart)

I have installed version 3.7.3 of Telegram Desktop and works fine for months and with 100% display resolution. 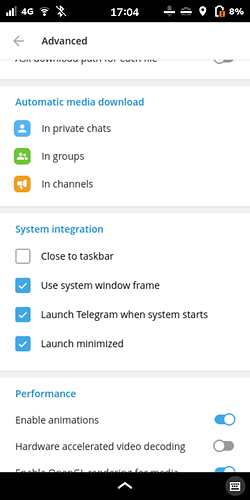 You may have to restart Telegram before it works

I tried a 3.x yesterday (from the PureOS apt repository) but it could not bind to my account. Maybe the protocol for that changed. Make sure not to uninstall

Anyway as I said it works nearly perfectly (just some focus issues when opening a photo) up to version 4.1.1.