I talked at length in my article Investing in Real Convergence about my decades-long wish to have a single computer I could carry with me that had all of my files, ran all of my favorite programs, and that I could use as a mobile computer, laptop, or desktop. This past week I have finally realized that dream.

I put away my personal Librem 13v1 and tested out whether I could replace it with a Librem 5, USB-C hub, and Nexdock 2 laptop dock. I also spent a couple hours most work days trying it out for work as well (including writing this article from the Librem 5). In this article I will talk about my setup, experiences and impressions from the past week. 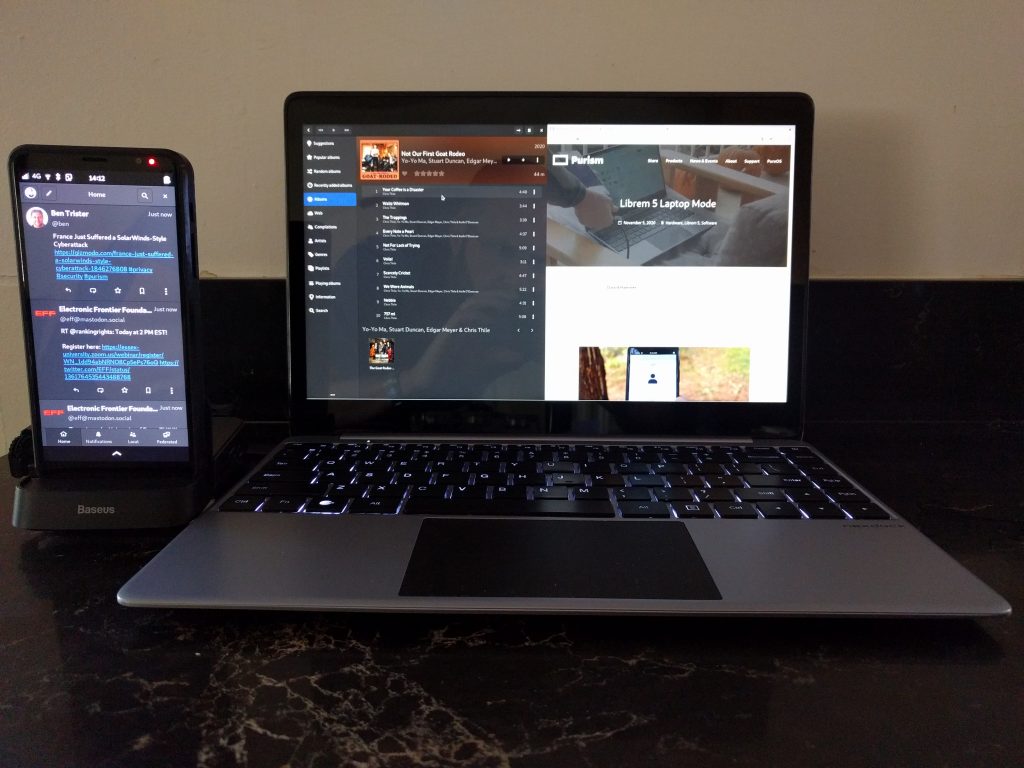 The little advertisement video made me drool. I hate itune so much when it comes to organizing my music. It’s great that you developpe that alternative.

Nice! Can somebody say what the max. resolution via display port alt-mode on the Librem 5 is? I have a monitor with 3440x1440 native resolution and would be happy if that worked well without any interpolation!

My understanding is that the Librem 5 can support 4k displays.

Thanks! Would appreciate that and test it once my Librem 5 is there

I’ve noticed that Silverjuke is also available.
I’m using this software as my most fav music player (currently on windows, but surely on my Librem 5 as soon as it is in my posession).
I can recommend this player

Is the Baseus USB-C hub a must for using it with NexDock?

It depends on the Nexdock. In the article I mention that the Nexdock Touch works just with a USB-C cable. The older Nexdock 2 that I have doesn’t fully work yet (negotiating display port and USB-c hub modes apparently isn’t trivial and is somewhat unique to different hub vendors).

So putting a hub that works with the Librem 5 in between the phone and the laptop dock is a surefire way to get it to work, if you follow the steps and adapters Nexdock provides to connect it to a Raspberry Pi. I suspect something similar would work for most other laptop docks that provide HDMI in.

many thanx for your quick reply and explanation.

This USB-C Hub should also work for charging only, correct?
So to have a nice place to put the Librem 5 for charging…

At the bottom of the Nexdock compatible smartphones page the Librem 5 appears as “Librem 5 + ubuntu touch”. Hmm. If you have an alternative image that is more accurate, you might like to consider asking them to use it instead.

Yes, the hub should work just for charging as well.

They haven’t updated that image in years. I think they might have put it there shortly after I mentioned the Librem 5 in the kickstarter comments, but that could just be delusions of grandeur. I only actually backed that project because of the Librem 5, so I’m glad to see there’s a motivating reason to get the Librem 5 working with the nexdock 2.

It works perfectly with a pinephone running mobian by the way, aside from not being able to keep up with the power consumption. Although there are some graphical glitches, like the blacked out windows of anbox even though the lapdock is the easiest way I have to work with anbox. I don’t think those have anything to do with the lapdock in particular.
Another helpful key combination: super+click a window border. Handy whenever a window spawns partially off screen.
(pictured: the ublock origin drop down appears in the wrong spot, although all the hitboxes are in the right spots. Also, successful installation of Signal.) 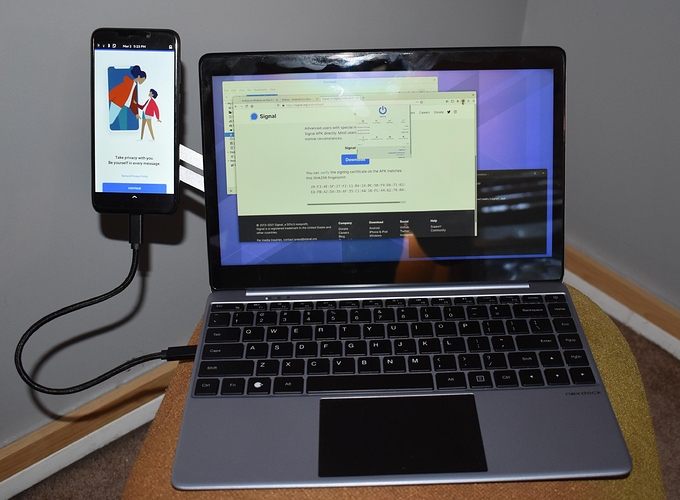 Or an ultra-light but bigger dock for those who want that.

Talking about the size of the screen.

Looking forward to being able to try stuff like that. I need more hardware or more supported hardware. Need to do more testing.

Not a fan of this construction:

Forgive my skepticism, but I’m having difficulty seeing the advantages of this over a laptop. The article shows how it does work, but does it offer any advantages?

The libram 5 appears to be a heavy dongle on the laptop looking thing making it a bit more unwieldy than a laptop would be. (I know it’s not a full laptop, but it looks about the same in terms of ability to use)
Unless you have a monitor and keyboard/mouse at your destination it doesn’t really save you any carrying.
I could see it being kinda neat for giving a presentation where the keyboard, mouse and screen are provided.

It’s neat this can be done, but will it have a practical use?

I would guess the biggest benefit is not having to sync files between your computer and phone. The fact that the phone charges from the dock is useful too.

Forgive my skepticism, but I’m having difficulty seeing the advantages of this over a laptop.

Laptops generally fail because of things like broken hinges, broken keyboards, broken cooling fans, etc. If those things break, it costs less to replace a laptop shell than to buy a new laptop.

Librem 5 ($799) + NexDock 360 ($269) is probably cheaper than buying a separate smartphone and separate laptop, and because the Librem 5 doesn’t have moving parts and gets lifetime software updates, it will probably last longer than a laptop.

The downside is that the i.MX 8M Quad processor has limited performance. You can’t upgrade the RAM and SSD on the Librem 5 like you can with a good laptop. The microSD card on the Librem 5 is slow and the Librem 5 only provides 32GB of internal storage. 3GB of RAM also limits the functionality of the Librem 5 as a PC. If you don’t need a fast processor, much RAM and much storage space, I can see the advantages of convergence with the Librem 5.

I think this idea will really take off in the future when there are Linux phones with better hardware. Many people would be willing to give up their PC if Purism makes a Linux phone with the RK3588 processor, 16 GB RAM, 512GB Flash storage and a USB 3.1 port that supports 8K video out. I’m hoping that will be Purism’s next phone, instead of one based on the i.MX 8M Plus.

I’m having difficulty seeing the advantages of this over a laptop.

In principle it is more flexible too i.e. you can mix and match phones with docks. Maybe that is more applicable to a company though i.e. with a fleet of devices.

not having to sync files between your computer and phone

Only one device to backup / keep up to date with software updates too.

Unless you have a monitor and keyboard/mouse at your destination

That’s right. For certain well-defined commutes (e.g. home to work to home, where both home and work have a monitor, keyboard, mouse dock), it is much easier because you can take only the phone and yet work continuously (OK, is working continuously a good thing?

) - and if you are going somewhere that you won’t have the needed hardware then you can take the NexDock.

Hmm, i think “Convergence” and “NexDock” are intermingled here.