I don’t see the need for L5 inconvergence mode to be “better” than a laptop.

This will almost certainly allow me to downsize by one device, possibly 2.

@Kyle_Rankin When docked, with apps on the external display running, how do you handle an incoming call?

I don’t get a lot of calls but I did get one incoming spam call while I was docked to the laptop. It was cool seeing calls show up on the screen. I didn’t pick it up, but if it were a legitimate call I would have switched to speakerphone mode. Alternatively I could have used the included set of headphones which has a mic.

Hy @Kyle_Rankin , can you specify the doc/hub a little more? I am currently working on a 3d print file for desktop use. Am there also still looking for a usb cable with angled output

With respect to whether this use case is for everyone and the questions about “why not just use a laptop?” it really comes down to opening a possibility where there wasn’t one before.

For me at least, I work from home (even before the pandemic) and my pre-L5 days involved my working part time on a laptop from my couch in the morning, ultimately to move that laptop to my office and dock it to a larger monitor and keyboard for most of the work day.

After work I’d go back to the living room and unwind with a little web browsing, social media, or listening to podcasts or watching videos, before dinner. All of this was done on my personal laptop that I typically left on an end table next to the couch. When I got the L5 I moved a lot of that workflow over to it directly, even before a dock, but as I say in the article, when it came to writing long emails or doing a lot of chatting I’d break out the laptop because of the physical keyboard.

I imagine the most useful use case for a lot of people who have a commute might be a dock at work and a dock at home, each connected to a set of monitors and keyboards. They can use the phone in “phone mode” during the commute, and at home or work dock it and use it in “docked mode” and have the convenience of having all of their files and applications there (and the convenience of transitioning a running application you were already using on the commute from a small phone app to a larger app on a monitor, which is a bigger deal than you might think).

For me I just mostly use my personal laptop on my lap on the couch, so a laptop or the Librem 5 on a laptop dock takes the place of a desk with monitor and keyboard. I’m not necessarily traveling with it much. However I still think I’d prefer traveling with a laptop dock than with a laptop, even if they are the same size, because I would be taking my phone with me regardless, but the dock is cheaper and easier to replace in case of damage or theft, and I’d be less concerned leaving it in a hotel unattended. Plus in the case of short trips where I would normally have to take my work laptop for emergencies, I now am feeling pretty confident that I could get by with my Librem 5 + laptop dock (in case I have to send some signed and encrypted work emails).

Obviously the degree to which a Librem 5 can replace other devices is going to depend heavily on what you do on those other devices, but at least for me, a surprising amount of my daily work doesn’t require gigantic amounts of RAM or CPU resources. Your mileage may vary.

The hub I’m using is a Baseus brand. The bottom has the model number GN16A.

thank you for taking the time to give your input ! much appreciated !

about the dock. 30 to 45 degree inclination would be ideal. 90 degree angle to a horizontal surface is too steep in relation to my eyes and body posture/wrist. i’m saddened by the fact that most of the time ergonomics is an afterthought when in comes to compute equipment …

Good point about the ergonomics. In that case you may be better off with the magnetic mount for the back of the NexDock - so as you tilt the dock screen back to the optimal angle, the phone moves back with it.

Given this is my main reason for buying, (to be able to use a phone as a PC, and take it anywhere/everywhere.)

I can’t resist sharing this. For anyone with the skills and patience, here is how to do convergence in style! https://youtu.be/DrqdHVeBkp4

Needs a brass L5 chassis too

But that would be a very classy convergence.

Hi,
Good to know that the Librem5 is coming out …

Could we please have the specs/names of the USB-C hub that fully supports the phone?

Firmware binary and config for the tp65982 in the Librem5 *Evergreen* and later batches Don't use on *Aspen*, *Birch* and *Chestnut* as is. It should usually work on *Dogwood* but...

i believe this is one of the better options: 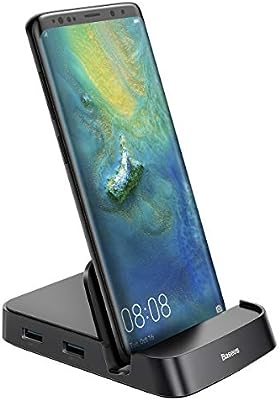 Has anyone actually used this in the Wild ?

That’s the one I reference in the post at the top of this thread.

Hi, regarding docks: I told my brother he didn’t need a dock for the laptop I’m giving him, and that docks are not as necessary as they may have been. I think he can use it is a laptop, or, connect dual monitors and bluetooth wireless keyboard, and told him so. Is that incorrect?

I just ordered a Librem 14" for myself, by the way, and a LabTop Mk IV for him. I have never seen any reference on this site or at Starlabs to docks. I can’t imagine what good having a dock would do for either of us.

Am I safe here, in the case of these two machines, or is there something I should know about docks next time I make an assumption about a computer?

I do thank you! Can’t wait for my L14 to arrive! (Just ordered it this morning.)

I told my brother he didn’t need a dock for the laptop I’m giving him, and that docks are not as necessary as they may have been. I think he can use it is a laptop, or, connect dual monitors and bluetooth wireless keyboard, and told him so. Is that incorrect?

Current discussion is about the phone Librem 5, which can be used as a full desktop computer if you connect it to a usb hub or a dock. Purism laptops don’t require docks of course.

I’ve never actually used a dock, so I can’t advise, unfortunately. But here, we’re talking about a dock just for the phone to connect to, as @fsflover said above.