Ever since it was discovered that there was a T1 variant to the BM818 modem for the Librem 5, we have gotten questions from our friends in the Asia Pacific region about whether we would offer it. We didn’t want to announce anything until we had modems and could test them in the Librem 5 to ensure they work but I’m happy to announce we just completed that testing and it works!

We will be adding the T1 modem variant to our shop shortly, and for customers in that region, when you get your shipping notification email, we will default to that modem, but you can of course choose the US or EU variant if you prefer.

IIRC there are now 5 options. Besides available bands in different countries there then remain 2 or 3 options for different countries.
Could any of you expert shortly describe in an non-technical comprehensible manner how to choose the right option?

how to choose the right option

We default to the BM818 modem and we will default to the best-supported variant of that modem for each customer depending on where they live. When we send out the shipping notification email customers will have the option to override that with a different modem, but the default should work best.

customer depending on where they live

NIce clearification. So, you know that you send my package e.g. to Austria and therfore my default is different from another customer being shipped to e.g. Canada. So in principle everything is set and done for me.
Great 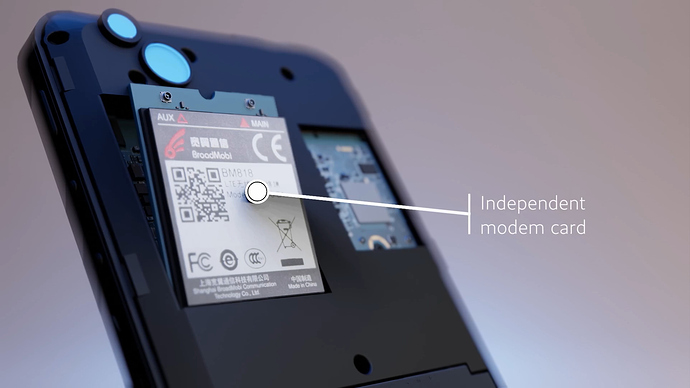 To add a bit of that technical info, so no one needs to go look for it. A table comparing all the frequency bands can be found here.

The optional additional Thales (formerly Gemalto) modems (from manufacturer’s brochure and other documents on site):

Note on South-America based on limited search: BM818 covers bands better. For instance Argentinian, Brazilian, Chilean, Paraguayan and Peruvian networks will benefit more from T1 modem as it covers all the combinations. Bolivian networks on the other hand seem to benefit mostly from A1 modem. If you want to use PLS8-modem, please check first which network you will be using and what bands it has as some operators use bands that are divided between E and A1/US models (often only B4 for LTE).

Note on Africa based on limited search: Algeria, Botswana, Egypt, Ethiopia, Niger, Nigeria, Kenya, Mozambique, Senegal, South-Africa, Tanzania, Zambia, Zimbabwe all have networks that predominantly have B1 band (some B3 and B20 here and there) as well as GSM900Mhz. Therefore the E-models should be the default.

Note on Middle-East based on limited search: Bahrain, Iraq, Israel, Jordan, Kuwait, and Saudi-Arabia (as well as Pakistan and India) may be best served with an E-model modem. Mostly B1 and B3 networks, some B5 and B8 but also B40 in couple of places.

Note on Antarctica based on limited search: No network information found. Ski near the Argentinian base to use GSM or use base wifi (satellite).

List of suggested exceptions to defaults (including any links), provided by users: …

If someone wishes to comment with more information, I’d be happy to update what the other areas default to, or if there are any special cases where the default may not be the best option. Asia, South-America, Africa, Antarctic…? For more on finding out about your network, see here.
This can then be used to make an answer to the FAQ.

The blog post talks about two plus one BM modems. That first one is apparently not an option.
I updated the Promise Delivery Chart like this and hope it’s correct

Does anyone have the link to Thales modem bands handy? Could add them to the same list for comparison.

A separate idea: an automated web form, where you can input the bands used by your carrier and the output would be a modem recommendation! Or, a list of all the possible networks and countries to do the same. Or both, it there are several types inside a country (like border areas, where the neighbor might have better service.). Anyone know if such already exists or wants to make one?

Why would I chose PLS8-E over BM818-E1?
According to those brief specs this supports less bands and Kyle described, that default modem is best for selected region. So why would I do that?
As said before: I am non-techie.

I’ll refer you to @amosbatto’s FAQ answer on that topic. To put it bluntly: One has better coverage while the other is not made in China. Each may put value on those as they see fit (conversations on this should be made into it’s own topic thread, preferably - see: Chosing the right modem PLS8 vs BM818).

Thanks for the link and the brief explanation. No (I thought) I got it … and stumbled upon this.
So coverage of T1 is way more higher than E1. Except B20. So why not chosing T1 also for Europe?

It may be because of the couple of bands difference or personal preference. I have no good answer. [edit to ephasize: that B20 is pretty central to EU users]
Btw. that list is good, had forgotten about it (it’s been only two years) - will add that link as the table is more readable.

To put it bluntly: One has better coverage while the other is not made in China.

Not sure if it’s that simple since BroadMobi does not officially support VoLTE while Gemalto does (and some regions are planning to drop support for non-VoLTE calls). See the following thread.

@todd-weaver, @Kyle_Rankin, @nicole.faerber, @dos: I got into a debate with the peanut gallery on r/Purism about AweSIM. In one of my responses, I cited an article stating that T-Mobile is no longer allowing activation of non-VoLTE phones after Aug 4, 2020 and will stop allowing any non-VoLTE phones to use its network after January 2021. However, I assumed that these restrictions wouldn’t apply to T-Mobile’s MVNOs like AweSIM and I cited a Ting representative saying that it will still be possi…

BroadMobi does not officially support VoLTE

I guess someone will need to get to the bottom of that. Without that info, the decision regarding modem would only be partially informed - but then I suppose that is the real world.

the bands used by your carrier

BroadMobi does not officially support VoLTE

There maybe a bit of uncertainty about that still, unless you have found a definitive source (didn’t see one in the thread)? Their site does not give very detailed information, although omitting that seems a bit dubious (as VolTE is listed in other product). If memory servers, there was some talk that it was possibly an yet uncertified feature, maybe.

Why yes, it does indeed. Hence the automated lookup part of such a webpage. Although, I’m sure there are databases somewhere that could do this with just an address or coordinates (knowing which towers use which bands in what the locations). But as long as we don’t have access to those (do we?), we’d have to do this part manually.

@mladen Any idea if Gemalto and Broadmobi have been tested by any of you side by side? Any difference in usability, voice, data…? Or is that just not available yet (and when would it be)? Any idea about the ballpark what the price difference would be?

There maybe a bit of uncertainty about that still, unless you have found a definitive source (didn’t see one in the thread)? Their site does not give very detailed information, although omitting that seems a bit dubious (as VolTE is listed in other product). If memory servers, there was some talk that it was possibly an yet uncertified feature, maybe.

Exactly, it’s still uncertain which is why I brought it up.

But it makes more sense to think of it in the opposite way, unless it’s officially stated from BroadMobi/Purism that it IS supported I’ll assume that it’s not.