Will the Librem 5 work in Sweden, Norway and Finland?

I tried to figure it out by looking at the bands that the mobile phone supports but I don’t really understand if it’s really going to be supported where I live?

I want to be sure that I will be able to use the phone while traveling to the countries closest to me before I preorder. If there is anyone who knows the answer to if the phone will work with 4G-networks within these countries, please let me know.

According to the list of bands used by the EU modem it will work at least in Sweden and Finland (I checked it). But I have not looked at the bands used in Norway. However, I suppose they are the same as in Sweden ?

Here are the bands for Norway: https://www.frequencycheck.com/countries/norway and compared to Finland they use one UMTS band less (where as Sweden has extra LTE bands in use by different operators). And as for the Gemalto PLS8 3g/4g chip there seems to be enough matches https://www.gemalto.com/brochures-site/download-site/Documents/M2M_PLS8_datasheet.pdf to them - it is after all intended for emea region.

BUT: what I’d really like to know - working in Scandinavia or elsewhere - is if keyboard different layouts are supported. I can work with OS being in english, but need to write with a bit different alphabet daily.

is if keyboard different layouts are supported

That can be fixed after shipping, the hardware supported UMTS and LTE bands not so easily.

Agreed. I am very hopeful. And there are several other layouts that need to be considered as well.

There should be some support for Norwegian (Bokmål, at least) because I’m using it to test the keyboard’s input capabilities. Support for other languages depends on having a good idea about the requirements of those languages and a design for each keyboard layout. Feedback on those is welcome!

My mind went to Dworak and such

Seriously: is there a list somewhere which are ready or in the works? (for reference: https://en.wikipedia.org/wiki/QWERTY) Fi variant would be appreciated - not much different form No, I think.

There is this issue but it’s a bit more specialized than “support these layouts” so it’s probably not exactly what you are looking for.

I’ve created an issue to track exactly what we should have.

I’ve created an issue to track exactly what we should have.

Excellent, thanks! Dvorak was also a joke, but I suppose there will eventually be someone wanting it…

Do I assume right that this doesn’t affect using bluetooth or wired keyboards via usb-c?

Feedback on those is welcome!

@david.boddie I added full translation of my language for phosh. Just let me know if you need anything else.

Thanks for the translation. I guess if you used Zanata for that then it will be picked up automatically, unless we already have it. Does this look like it?

It would be useful to know what kind of keys would be useful on each layer/view of the keyboard - see this issue for an overview. When experimenting with a Norwegian keyboard, I put the ø æ å keys in the main view because they have their own keys on a physical keyboard. Where other keys should be placed on other views is something that someone familiar with Norwegian keyboards needs to decide. On physical keyboards, the ( ) { } keys are in different places to those on a US or UK keyboard, so putting them in a comfortable place for users is important.

The layout on the virtual keyboard doesn’t affect the use of physical keyboard and their layouts.

Nope, that looks like an old norwegian file (mine should be finnish / fi). The phosh/po/ directory seems to be missing that. Hasn’t updated? Or translated won’t update untill translation is approved in Zanata (not sure who would do that)?

If you look at no, swe and fi layouts, you’ll see those three letter placings are almost same, only two change place. Most other special characters seem to be identical between them.

I think the translation will be picked up before a new release - at least before a new significant release, because new iterations of the shell and other components are being released all the time.

I’ll take a look at those layouts and try to find all the common keys. Really, the best way to make sure that those layouts are optimal will be to get people to start using them. Until then, we should try to generate previews of the layouts so that we can get more feedback about them.

@david.boddie regarding feedback… This is more about space on the screen - I’m not sure about implementation. A big screen like 5.7" should have more buttons on the keyboard (I’m comparing to an inch smaller with more keys). I noticed the screencaptures in this issue.

Why not have more buttons available on the keyboard layout? I’m sure english can appreciate having more convenient access to commas and slashes etc. Other languages would need to fill those with their characters. Second and third row already have empty space, which admittedly looks nice and may help defining keys better, but its of no use, if parts of alphabet is behind menus.

Regarding the menu from “globe” icon, how about include there the smiley-icon list as well an expanded charactermap. Import these to text by touching, like keybutton. As I looked at the number of buttons in the three keyboard screens, with additional characters in other languages, something has to go - and I see you’ve already had to ditch some. Localized keyboards would still need to be figured out, but a larger fullscreen scrollable list could be used to store the ones that are more seldom needed, but still kept handy(ish). Such a grid/list-type thing could also have (separate) user defined strings of text (“In a meeting - will message you later”, “Of course I love you” etc.

The interesting thing about the screen is that you would expect it to be able to support more keys, but I’ve found that it doesn’t really do that in portrait orientation. In landscape orientation there is a lot more space to play with, and I hope we can do something with that.

“Simple” languages with extended alphabets need to be handled better within the design. With Norwegian, I found that I could squeeze another key into the top row and fit two more on the second row. 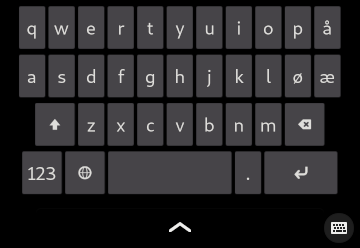 I think the globe is supposed to provide access to emojis (see issue 25).

Regarding handy strings, the keyboard is supposed to adapt to different situations, so a URL field should cause a URL-centric keyboard to be displayed. This should contains shortcuts for “https”, “www.” and so on. It’s interesting to consider a general user-defined page of common words or phrases. I’ll open an issue for that. Thanks!

If you have the time, it would be easy to add swedish, finnish and danish if you already have norwegian as they are very similar.

They are like this from left to right with the top row first and second row after:

I think the globe is supposed to provide access to emojis (see issue 25 ).

IIRC, the globe will be a language and maybe a layout switcher.

If you have the time, it would be easy to add swedish, finnish and danish

The keyboard is getting easier to edit with a big rework behind the scenes.

It’s still a bit early on the keyboard roadmap, but if you are interested, I encourage you to try adding the layouts, and file issues along the way. There’s no bigger motivation for us (or at least me) than people complaining that they want to contribute but something’s missing

IIRC, the globe will be a language and maybe a layout switcher.

I saw in a picture a menu and thought that the lists (emojis, full[er] charactermap and user defined strings) could be opened via that. Thus they’d be available in most use cases and there would be less need for user to learn different input flavors.
Good to hear of progress (the big rework).

Just a quick +1 for danish layout

If you have the time, it would be easy to add swedish, finnish and danish if you already have norwegian as they are very similar.

Though the Danish layout have
Danish: å, æø
(The æ and ø is (of course) switched around)