I had intended to do a test from a full charge with nothing running except the cellular modem, but the phone seemed to keep “forgetting” my saved network name after the screen was off for a while, so I finally just left it off. I imagine this is a Modem Manager software issue. (Maybe @dos could comment on that.)

I started the test at 2pm from a full charge with the phone sitting on the table. I checked the charge level every two hours:

I discovered that the battery had apparently drained completely sometime between 10pm and 12am. I tried switching the phone on, but it wouldn’t, so I plugged it in for a recharge and went to sleep.

So that gave me an idle time of between 8 and 10 hours. I’m not sure if the modem might have been searching for my cellular provider during that time, or literally doing nothing. For a “computer” I suppose that 8 to 10 hours is not too bad. For a phone, of course, that will have to improve.

I also can’t say whether the charge indicator is precise or not.

After I recharged the phone fully, it still wouldn’t turn on, so guess what? I REMOVED, THEN REINSERTED THE BATTERY.

Then I was able to turn it on again. Removable battery, folks! Enough said.

Edit: By the way, the phone stayed quite cool during the entire test.

I’m not sure I understand; what exactly do you mean?

I also can’t say whether the charge indicator is precise or not.

It’s not; an update that makes it kinda accurate on Evergreen is coming within days (it’s in -staging repos already), and there will be more updates coming afterwards that should finally make it utilize the full accuracy of the battery gauge chip: https://source.puri.sm/Librem5/linux-next/-/merge_requests/198

My network name (Truphone) disappeared from the Mobile settings here: 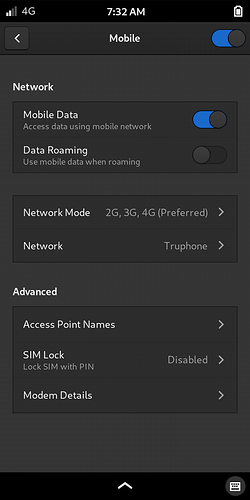 Until I reset it here: 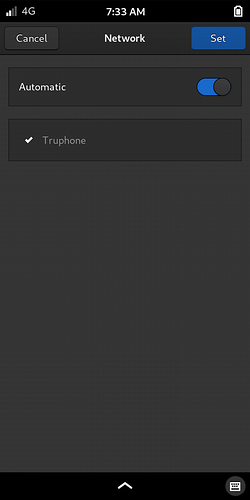 It never lost my saved network information, APN, etc., though.

For everyone’s interest, here’s what the Power settings look like: 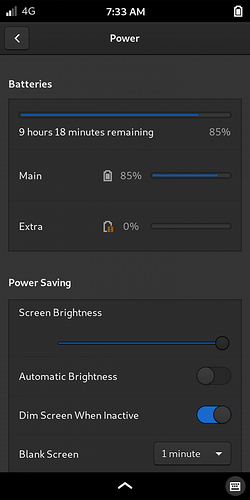 Extra battery? I wonder what that slot is for?
Maybe if you charge it with a powerbank and it exposes its battery status over USB or something?

Would be a kind of nice feature. You’d be able to watch the 2nd battery discharge as the 1st charges.

Maybe it’s for some Bluetooth devices? I’ve seen my headphones show up there before, though oftentimes it just says 0%. Likely wrong, though. I’ve never seen “extra” before.

@dos, can we know what does the “Extra” option under batteries mean here?

@dos, can we know what does the “Extra” option under batteries mean here?

Nothing, it’s just an artifact of how the charger, battery gauge and USB-C controller drivers are exposed by the kernel to the userspace. The Extra battery should eventually go away.

Maybe it’s for some Bluetooth devices? 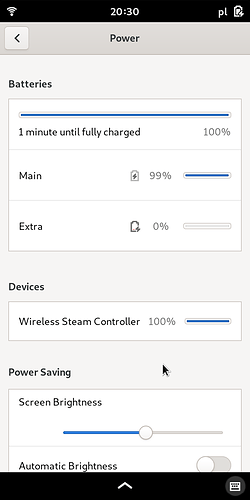 If you’ed like to my old battery test bash script is still a thing, you’ed have to do dig it up in the old dogwood posts. Then from there it should just be setting it up with crontab.

The github link at Still no dogwood? has Bat.sh .

Can you talk me through how to run it; I do very little in Terminal.
It’s this, right?

I don’t know if it needs root privileges. In case you must prepent a sudo .

Edit: now I see. Probably the program should be executed periodically. Many with cron or so. I don’t have cron expertise, sry. Just wanted to help.

Understood. Will check it out later.

cd into the Downloads/ directory first …

Yes but then he has tun run it as ./Bat.sh. The prepended “./” is a common pitfall so I decided to go the other way.

Some laptops have more than one battery. I’m guessing there’s still a config file around for the smaller battery shipped w/ earlier batches that gnome is seeing.

You have to set it up as a cronjob to get it to run whenever you’ed like. as much as every minute, that’s what I had it set up for. The video can tell you how better then I can, the shell script itself just copies file’s readouts when it runs and sorts them into a CSV file. It’s fairly easy to mod the shell script, I set it up to explicitly refer to the file name of the matter on my dogwood. but the path other then that single part I am sure is the same. If you wish to do the same for any laptop you’ll find your batteries in the same part of the file structure with the same subfiles for whatever the batteries are named. Handy to know.