i am trying to use an aplication which does not fit very well - cherrytree-
when trying scale-to-fit
i get unable to locae package scale-to-fit
where can i find it? how do i install it?
sudo apt install scale-to-fit didn’t work

It’s an app that installs with part of the package called Librem 5 Goodies. You can install it from the PureOS store app.

Actually, scale-to-fit looks like to be a simple shell script, part of phoc:
https://source.puri.sm/Librem5/phoc/-/blob/master/helpers/scale-to-fit

Doing a search on the forum, I found this info how to download and use it: https://forums.puri.sm/t/librem-5-nextcloud/10434/7

But that might be too much. If you just want to do a simple test, you can just write this command (the main thing that script does):

First, run the application, cherrytree, as you normally do [EDIT2: or maybe the command need to be run first, IDK]. Then, in the terminal do:

In the above command, you can replace cherrytree with the name of another application you want to scale, making sure you use only lowercase letters and digits (if any).

Tip: in the terminal, if you use the Up Arrow, you can reuse your last commands entered.

Edit: I haven’t test all of these, I don’t have yet the phone. I saw your video and was curious how would that scale. I assume it won’t be too usable after scaling since the widgets/texts will be too small.

@eugenr I tested this and it does make it fit nicely. The menu is quite usable, but it may be necessary to use a stylus to hit some of the small buttons/icons. 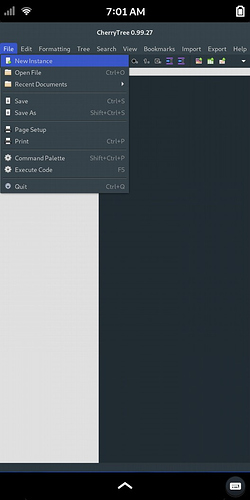 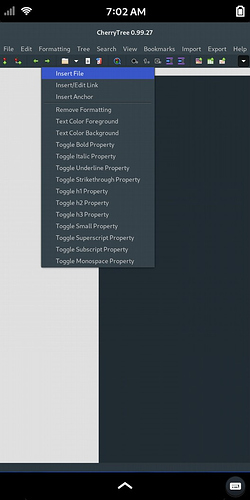 Thank you folk.
i appreciate it very much.
merry xmas

And to you, @sherab_kelsang!
Keep doing the videos; your perspective is instructive!

Thank you it seems indeed to work.
It is a little small for me but hey it’s working.

More importantly - how do I resume to normal scale?? change true to false??
Cheers

@amarok
thanks I sincerely appreciate your comment.
really touched my heart.
I certainly do not want to give people who attack Purism and Todd et al any ammunition.
cheers

Don’t worry…those particular detractors are always ready to shout down any disagreement with their dialed-in position, I imagine.
Namaste!

how do I resume to normal scale?? change true to false??

yes, false should do it.

yes, false should do it.

Using that command, I don’t know, but if you install the Librem 5 Goodies package, you will get the app Scale Screen (among others), which allows you to choose various levels of scale reduction. You may find a happy medium for CherryTree. Changing the scale using Scale Screen affects everything until you change it back to default, including the apps list, every app UI, and even the login screen.

You may have to change orientation sometimes, too.

When using scale-to-fit, the compositor automatically scales the application window down as much as it’s necessary to make it fit into the screen (but not more than 50%).

Yup I got it going. Cheers