By the way, if I am not mistaken, nautilus in Amber should be adaptive now 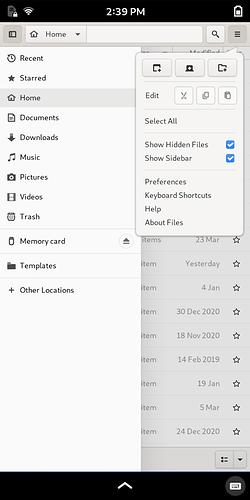 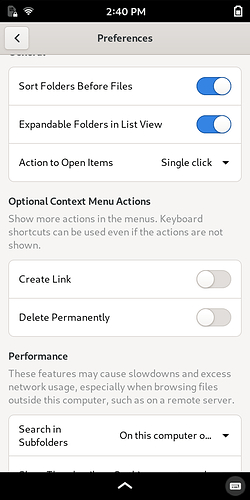 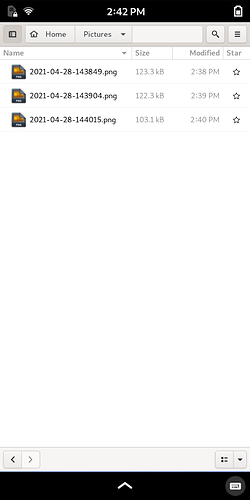 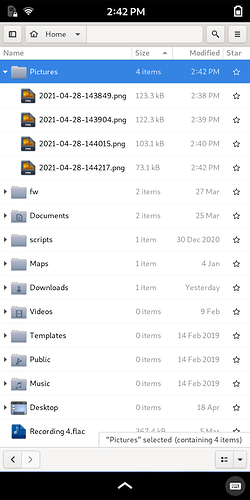 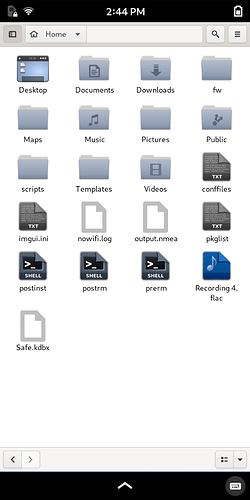 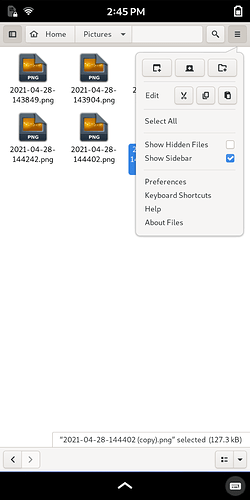 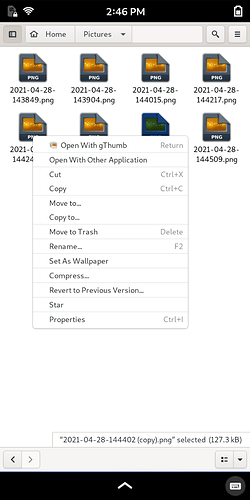 image720×1440 148 KB
Unfortunately, the context menu disappears when I lift my finger, so I couldn’t make use of the available actions. Also, dragging my finger without lifting didn’t actually allow me to choose an option, either.
Overall, Nautilus is good, but I actually find Nemo easier to use (maybe because I’ve been using Nemo for months, but Nautilus for minutes).
5 Likes
amarok April 28, 2021, 10:50pm #147 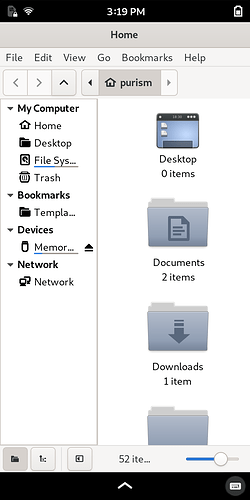 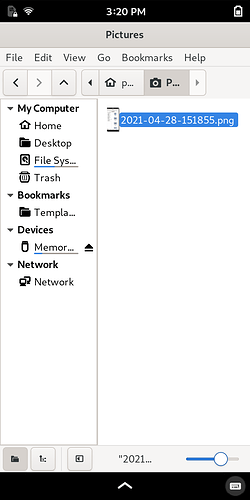 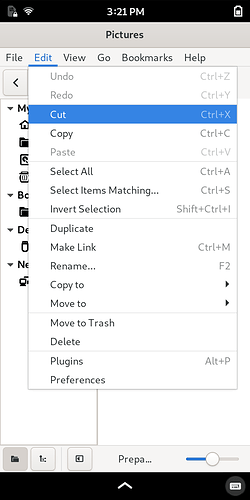 image720×1440 68.6 KB
However, the Preferences sub-menu does not fit the screen at all; you have to reduce scale all the way down to see all the options. (Advantage goes to Nautilus here.) If you don’t need to adjust Preferences very often, then it works great, and the editing options are easy to use.
3 Likes
How do I open a directory on the phone?
amarok May 4, 2021, 5:15pm #148 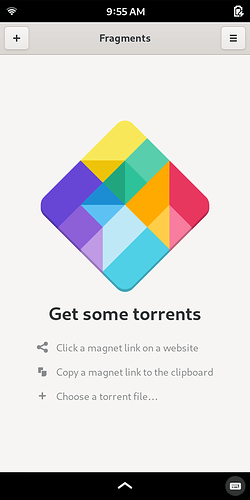 image720×1440 36.5 KB
Settings from the hamburger menu (scrolls further down for Notifications options, too): 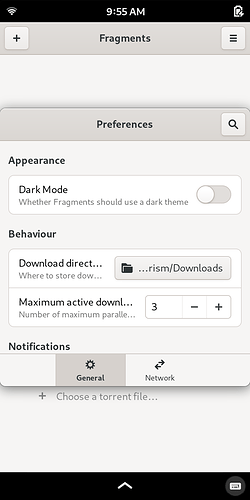 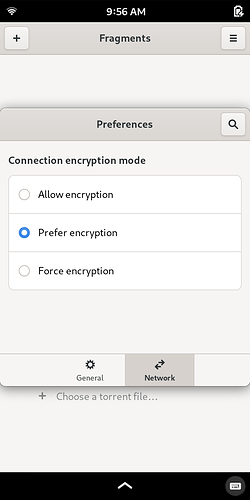 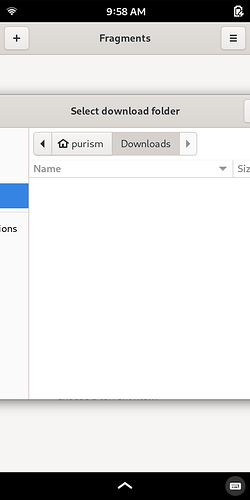 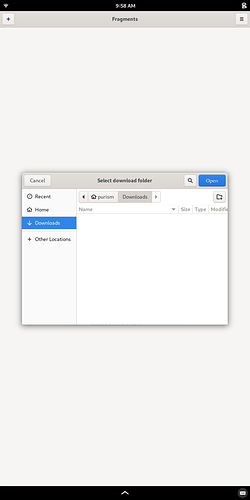 currently the only GTK based front-end for MPV is named ‘Celluloid’. when installed on the Desktop version of PureOS it can auto-download and install youtube-dl. i wonder if future versions will include ‘Video-Downloader’ or is that only a mobile thing (Librem5) ? since the back-end is ‘youtube-dl’ i don’t expect there to be much difference … any thoughs ?

Both Celluloid and Video-Downloader are available for desktop (although V-D appears to be flatpak only, maybe…?) They seem to have different purposes, don’t they? V-D being more limited than Celluloid, from what I can see, i.e. strictly for downloading video, not for playing your stored videos. At least, that’s what I observe superficially.

I just installed the Celluloid flatpak and it looks pretty good. I’ll post some screenshots.

Edit: I remembered that I tried Celluloid months ago:

Celluloid flatpak fits the screen perfectly, but plays mp4 and MKV in a kind of odd, continually chopped way, like it’s skipping frames at a predesignated rate. MPV native PureOS app when opened shows only one thing: “Drop files or URLs to play here” with no other controls or any menus at all. Since I can’t really drag a file to it on the L5, well… I don’t have anything in AV1.

i know you did. thanks for putting in the work ! 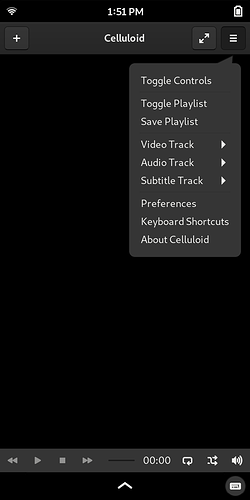 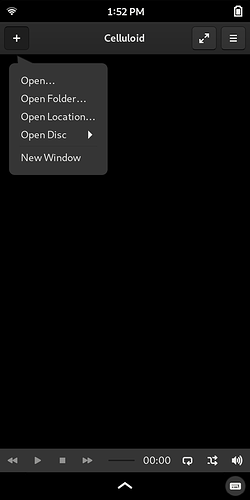 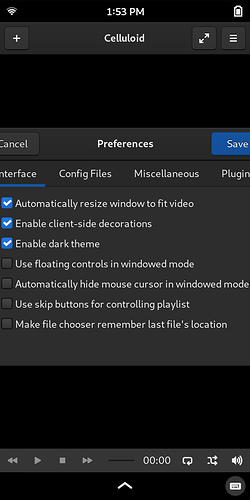 image720×1440 53.3 KB
Runs into problems here… Video playback is jerky, as if frames are missing. (That could be a nice special/artistic effect, though.) 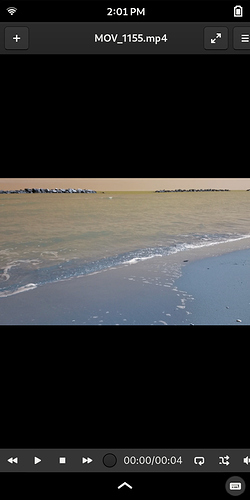 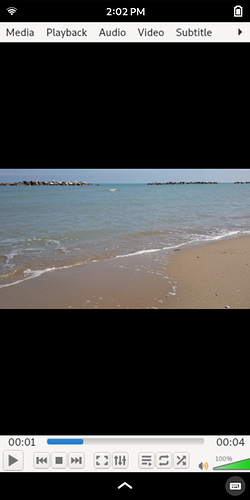 Just to be sure the jerkiness wasn’t due to the fact that I was playing the video from my connected USB drive, I copied the file over to the L5’s hard drive…but it was still jerky.

Here is GNOME MPV pureos app (Celluloid pureos app is not in the store): 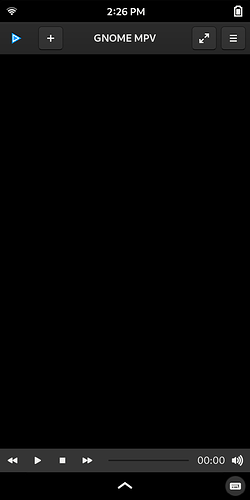 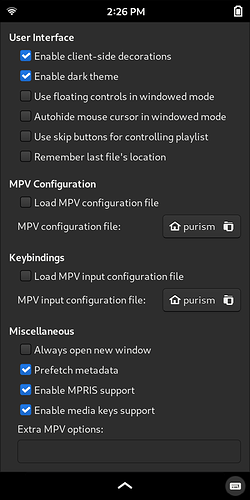 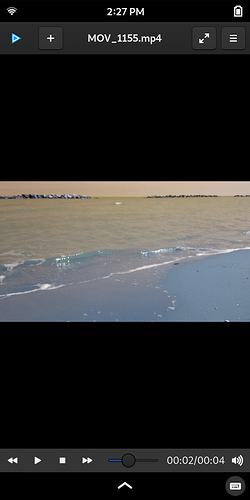 best thing with the MPV back-end is that you can more easily add/play separate A/V streams. that makes it really nice in a combo with yt-dl … too bad that the LBRY protocol doesn’t offer separate A/V files in it’s DL options in the app. only snooptube allows you to dl separately A/V files which make it nice if you only want podcast like experience without the video overhead on the mobile.

this save the monthly/yearly mobile bill and your battery life. pottentially your eyes as well …

Actually, neither MPV, nor Celluloid, state in their descriptions that they’re officially adaptive yet…just like thousands of other desktop packages.

i’m confused. why does the desktop package need to SAY it’s adaptive ? i thought that was a mobile thing with PureOS and Librem 5.

Some apps have specifically been adapted for mobile, and make a point of indicating so. Others don’t indicate it, but in some cases they do happen to adapt well or “almost well” to the small screen; it could be that they always had that built in by the devs… I don’t know.

And some apps written for desktop (…and even though they can be found by searching from the L5…) just aren’t adaptive to the screen at all, or are written in a language not used in the L5 (I’m unsure what the correct terminology is for that).

The store app on the L5 has a curated subset of apps that Purism has packaged for the L5; these are what you first see when launching the software store. Beyond that, using the search box, you can find many other apps, presumably all the apps that appear in the desktop PureOS store.

And then there’s apt, which reaches out into other corners of Linuxland.

i’d be nice if i had my L5 right now but i guess the virtual experience will have to do for the time being. right ?

no sir ! i’m not touching the virtual mobile PureOS environment untill i get my L5 so i can be properly blown away … unless this world blows up in the time being …

The app fits really well, except for this screen:

I would report that upstream at: https://gitlab.gnome.org/World/Fragments

The dev is usually responsive.

Here is GNOME MPV pureos app (Celluloid pureos app is not in the store):

gnome-mpv is what celluliod used to be called. In PureOS amber it is still gnome-mpv but in Byzantium is celluliod as for the differences in the two apps that you showed, where some panels did not completely fit the screen.
Flatpaks ship their own version of GTK3, in their runtimes. PureOS uses a patched version of GTK3 that it ships in the distribution. Those patches are what makes the window in question fit the screen perfectly in gnome-mpv and the lack of those patches in the flatpak runtime is what make it not adaptive with celluliod (flatpak version). If you install celluliod from the distribution repos in Byzantium, then the window fits, because that uses our patched version of GTK3.
This issue happens with some flatpak version of some applications.
GTK3 was frozen for a long time in the process to transition to GTK4 which was why these patches did not make it upstream at the time.

Thanks for that background, @joao.azevedo. It’s very helpful to know and understand these things, so please keep monitoring and explaining if you have the time.

I’m thinking of switching to Byzantium soon (as long as it’s not too difficult for me to understand how to do it).

working on my L5, neat 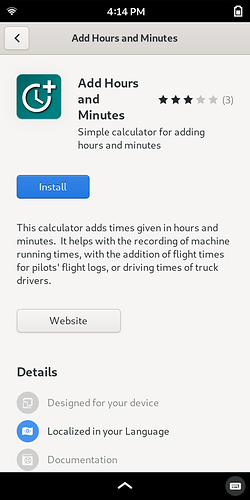 The colon is inserted automatically dependent on how many digits are entered: 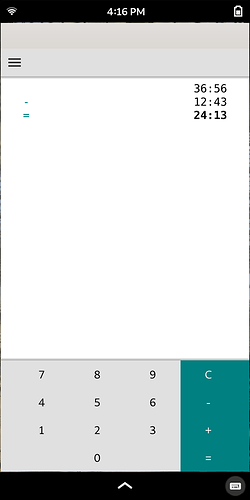 image720×1440 43.6 KB
The C button can clear digits until you hit =, but it doesn’t clear the screen after the calculation is complete. Multiple calculations stack: 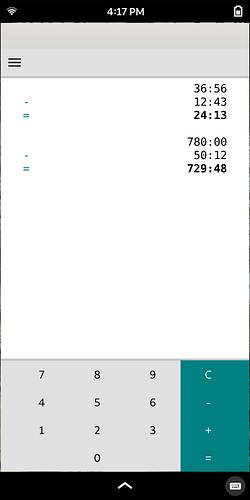 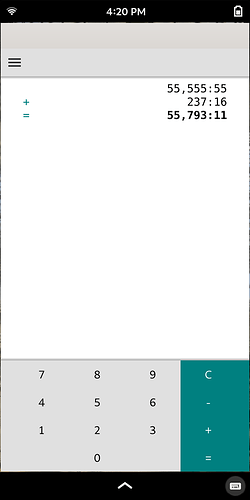 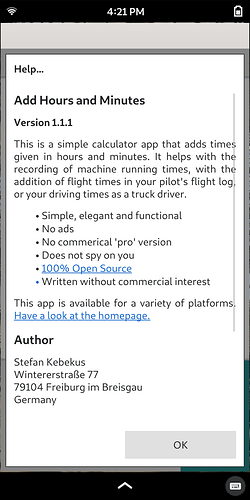