Many problems starting the Librem 5

I have several (serious) problems using my Librem5 that I received yesterday afternoon (Evergreen).

First of all, I can’t use my SIM card yet because it’s not a Nano Card. So I ordered one that I will get in a few days.
So for the moment I’m using the Wifi of my box.

Thank you in advance for any help you can give me.
Sincerely,
Patrick

Before you begin, you need to bring your Purism up to date. To do this, start a terminal (app) on your smartphone:

And reboot your phone!

How can I change this resolution?

and then use the provided Scale Screen app?

I have not been able to configure one of my email accounts with Geary, Thunderbird or KMail

I used Geary with success. What went wrong when you tried to use Geary? Did you get an error message? (To configure an account in Geary it seems that you have to provide 100% correct and complete information up front. You seemingly can’t give it partial information to go in and fix up or complete later. I would assume therefore that you need to be on the network correctly in order to configure the account.)

If you prefer a GUI, use the PureOS Store app, which you should have on your main screen.

I don’t know how to Frenchify applications

Have you used Settings / Region & Language to select French? It should be an option that is available out-of-the-box.

The 128GB memory card is not recognized

What file system type is on the card? Is it a new card? (never formatted by you) (I found it easier to format first on a Linux desktop/laptop as an ext4 file system.)

I can’t use my SIM card yet because it’s not a Nano Card.

SIM cards mostly arrive so that they can be punched out to whatever size you need. However that can be a semi-reversible process, so if your existing phone requires a SIM card that is larger than nano size, you might not want to do that.

Thank you very much execrable and irvinewade

Some of my problems are solved thanks to you:

Concerning Geary: the returned message asks me to check the incoming server settings. I checked and rechecked but they are the ones I use on my computer (Linux) and my tablet (iOS). I wonder if this is not coming from the ISP itself because I get a message from time to time about a “certificate” problem…

Concerning the memory card, it’s the one I use on my Android phone (under a French version of Lineage: /e/ or e.OS). Maybe it is not formatted in a format compatible with PureOS ?
Could I connect a USB key directly to the Librem, in order to retrieve files ?

Concerning the frenchization : Yes I chose the french language from the beginning.

On the other hand, I don’t see an application to use the camera to take pictures ?
Is there one ?

Thanks again for your help!
Sincerely,
Patrick

Maybe it is not formatted in a format compatible with PureOS ?

If it’s exfat then, yes, not supported out-of-the-box by PureOS on the Librem 5. I would suppose that it’s no drama to install the needed package though.

I would suggest that you connect the uSD card to a regular Linux computer, let it automount and then ask it what the file system type is.

I had the same general kind of problem. Unless all the info works 100% then Geary refuses to go any further.

If it’s a certificate problem, does the mail service provider allow insecure connections? I know that’s so yuck security but it may be one way to get past that point.

However there are lower level things that could be going wrong.

I don’t see an application to use the camera to take pictures ?

Still being worked on. You haven’t overlooked anything. It isn’t there yet.

Could I connect a USB key directly to the Librem, in order to retrieve files ?

Yes, a USB flash drive should work fine. You will need to have a USB-C flash drive or a USB-A flash drive with a USB-A to USB-C adapter.

Be careful though. The problem that you have with exfat will still be a problem via USB. So ideally the flash drive is formatted as ext4. Any flash drive that is larger than a certain size may unhelpfully come preformatted as exfat, so 32 GB or less will be more likely to work.

If it’s exfat then, yes, not supported out-of-the-box by PureOS on the Librem 5. I would suppose that it’s no drama to install the needed package though.

Kernel 5.4 brought native exFAT support to Linux because recently exFAT filesystem was open sourced, why not yet in L5 natively? 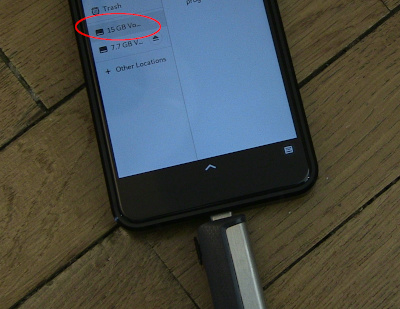 why not yet in L5 natively?

You would have to ask Purism for the definitive answer.

I think basically Microsoft was pissed that every device and his dog uses the FAT file system for its internal storage, and Microsoft was keen to rake in $$ for the next generation of devices (using exFAT).

You would not use exFAT with Linux unless interoperability required it. You would always be playing catch-up with Microsoft, as Microsoft introduces new undocumented features, subtly changes or clarifies the semantics of features, and in any case the specification is very likely tailored towards working well with Microsoft Windows and hence or otherwise being clunky with Linux.

You may have to use FUSE on the Librem 5 to get exfat support if it has been excluded from the kernel.

The 128GB memory card is not recognized

Does that work for you?

For the microSD card in the Librem5, I recommend using ext2 instead of ext4

Fair point. Any ext as distinct from some horrible Microsoft proprietary thing.

This is because the uSD card reader is a separate component and is on a USB bus.

This may not work if Purism is intentionally excluding exfat support.

I have a 64 GB SDcard formatted to EXT4 and work very well on Evergreen.

since it doesn’t have journaling

I think I opted to leave journaling enabled (on ext4) for the time being because I am expecting a number of, um, unplanned shutdowns.

f2fs is also a decent choice, less amount of journaling and should still handle sudden shutdowns fine. It’s not as widely used as ext4 though, but it’s specifically designed for SD-cards and eMMC.

any other reasons why ext2 is better than fat32 ?

So did nothing come of this then? https://itsfoss.com/linux-kernel-5-4/ It sounded promising back in 2019

Maybe I’m not understanding correctly but is this an error Geary is giving you? Certificate errors could be caused by the wrong date/time setup on your device which has happened to some people.

why not yet in L5 natively?

Likely just because nobody enabled it in the kernel config so far.

I hope someone will enable it soon in the kernel because exFAT drives are so common among new users that such issue could limit ease of use of mass production products.

The kernel source for the Librem 5 and its devkit