Conversely, if your neighbours can receive the beacon frames from your WAP then they can submit your WAP and its location.

I agree with you though, the out-of-the-box default is not appropriate. Has this been reported to Purism?

Conversely, if your neighbours can receive the beacon frames from your WAP then they can submit your WAP and its location

if you read my earlier posts you will notice that i already said that we do not have any neighbours in wifi distance. mozilla resolves my location only by IP. that’s why its so terribly wrong. but i told that earlier already.

I agree with you though, the out-of-the-box default is not appropriate

…for a libre phone

Has this been reported to Purism?

i hope they read here and rethink the design.

Conversely, if your neighbours can receive the beacon frames from your WAP then they can submit your WAP and its location.

But some could opt out of that: https://location.services.mozilla.com/optout

@mdt Do you have location services activated in the GNOME settings? If yes, I guess that’s intended. If no, I guess it’s an upstream bug.

Would Pi-hole reveal connections to Mozilla (on home wifi, no SIM)? I have Location enabled in the settings; I launched both GNOME Maps and Pure Maps, and didn’t see any such activity in Pi-hole.

Of course, I’ve never obtained a successful fix with the L5 (as far as I know), during my very limited attempts.

Do you have location services activated in the GNOME settings

sure and with a device containing GPS i dont expect it to leak information to a third party. do you agree?

Would Pi-hole reveal connections to Mozilla

sure, a dns lookup must take place, so pi-hole sees it. it’s probably not blacklisted there.

gnome maps shows that is has a fix and that jumps between china and hamburg. a proper fix was never established.

and tell you how to load them

can you give me that information?

sure and with a device containing GPS i dont expect it to leak information to a third party. do you agree?

As you are also from Germany, I would totally say “Jein” 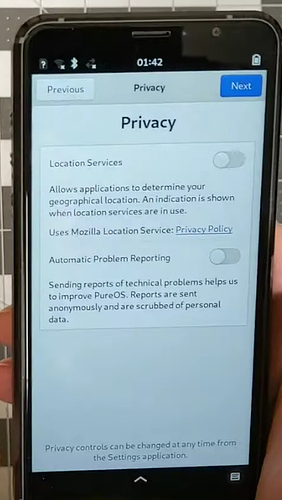 It is clearly shown that activating the location services during initial setup will use Mozilla location service and the privacy policy is linked. I’d expect that no data gets sent to Mozilla until you opt in manually. So I see no problem here - do you agree?

But checking it on my Fedora install (GNOME 40, don’t know how PureOS Amber/Byzantium do it), activating it after initial setup does indeed not show this notice until you already have activated it.

some could opt out of that

The neighbours could opt out but that’s not what I actually wrote.

I wrote that the neighbours received your WAP and they submit your WAP. In that case the only relevant decision is whether you opt out.

You are right of course that the only way to truly opt out is for you and all of your neighbours to opt out.

Opting out would be exceedingly inconvenient for me. It means changing the SSID (and having to put up with an SSID partly as determined by Mozilla i.e. would break the convention that I myself use) - and in my case it would involve changing up to 16 SSIDs, and reconfiguring all client devices.

By definition, when you change the SSID, even when you don’t change the PSK, you are also changing the underlying WiFi encryption key, so you may also end up having to re-enter the PSK on every client device. Fun fun fun.

On the Librem 5, if you are careful, you can avoid having to re-enter the PSK. You can rename and edit the relevant config file - and then reload or reboot. I don’t expect that to be an option on a mainstream, Google or Apple, phone.

So, yeah, I would like Mozilla to offer the option where I can submit my BSSIDs (WAP MAC addresses) and just tell Mozilla to ‘get lost’ permanently - but it should be obvious that on the face of it that process has no integrity.

Would Pi-hole reveal connections to Mozilla (on home wifi, no SIM)?

I would expect so - assuming that you have enabled WiFi as a source of “location information” on your Librem 5.

Maybe geoclue cached an answer though (either positive or negative).

) I can see quite a few lookups of location.services.mozilla.com. Those are all from desktops though - but then I have Location Services turned “off” in my Librem 5. Not much point, for my requirements, enabling it until the GNSS hardware is working and integrated.

(I did go outside and get a successful fix on the GNSS and the coordinates given were accurate to the extent that I know my own latitude and longitude accurately. So the basic hardware is working.)

Does this mean that Purism is actually shipping Librem 5 (non-USA) phones again? Or is this an anomaly? Good news if normal shipping has resumed.

The correlation to actual shipping is still to be determined, but there is a definite uptick in new address/modem confirmations emails, my own included! Hopefully, more to report soon…

It’s hard to make calculations because not every backer is subscribed here and not every subscriber will post his/her dates, but in any case the train started moving again. My two L5 are now, as DHL says,

and are planned to arrive on next Monday.

Does some German backer know, how DHL collects the VAT? At the door in cash, or with some billing, or in advance over Internet?

yes. mine is non-usa and all email communication did not look like an anomaly

Hello, I really like Mozilla’s work, but on the other hand, I don’t really like the influence that the Corporation part allows. They need funding, but you notice on Firefox that Google often reverts to being the default search engine, etc.

However, I am well aware that at some point you have to use a push service, so this question is just out of curiosity :

Do you know if Mozilla push data is not kept and/or resold? Thank you !

@mdt : Hello, I have some pure hardware questions :

Thanks for your feedback, and congratulation for enjoying your Librem 5!

Do you know if Mozilla push data is not kept and/or resold?

I don’t know but if you have to ask the question then you know the answer: Once a corporation or government has your data, you no longer have any control over what happens to that data. It can be replicated, moved and sold many times over. So the only control that you have is the control not to let data leak out in the first place.

I have some pure hardware questions

I know you directed the question to the OP but …

(I’ve had my phone for over 9 months so these are not first impressions but rather considered over many months.)

how do you find the L5 in terms of finishing

Good. Looks and feels well made. No awkward gaps. Nothing wobbles.

is the plastic cover solid ?

Solid enough. One of the smaller members of the household knocked my phone off a cupboard onto a hard floor

and the phone survived the fall without anything cracking or ceasing to work.

does the metal frame stick out to protect it from a fall or is the screen clearly exposed?

The screen is clearly exposed. If you want that protection then you need a case. However see previous.

(I would have bought a case from Purism with the original purchase if it had been an available accessory.)

what do you think of the thickness of the product?

It’s thick but not infeasibly thick. Honestly, I am used to it.

The bevel at the back of the Librem 5 reduces the visual impact of the thickness, while not of course changing the actual thickness.

I bought an L5 from a forum member. It is kinda thick but feels very silid and good looking. Haven’t fired it up yet though. Waiting till the software is more daily driver friendly as I am not very tech savvy. Nice phone. My regular L5 order was put in Jan of 2018 so I got a little to see the software improve.

I’m distracted more by the weight, which feels unusual, than by the thickness, which allows for a nice solid grip. But then, others have said they like the weight, because it provides heft.

To me the weight make it seem more solid sturdy and well built. a pocket computer. Not a thin light google/apple data harvester spy trinket

You probably mean what we name “gleichmäßiges spaltmaß” or uniform gap tolerance? That’s quite good. The switches and Buttons are equaly aligned and move smoothly. The gap of the plastic cover to body, cam & led are uniform too.

There is no thick frame around the display (like the openmoko had) and if the phone falls display-first it will probably be damaged. I have a screen protection sheet on any phone but not on this because it’s not available. Same for the protection case. I like the rubber ones so 3d print is out.

The thickness is unfamiliar but not bad, but i am not the right person to ask because i have large hand.

Another fact concerns me more: the warmth that is produced by the device. If you hold it and the frame gets warm and warmer.

I have a screen protection sheet on any phone but not on this because it’s not available.