Yesterday I received my phone. It’s thick.
I’ve been using android phones for a decade or more now. When I broke my last one, I switched to the pinephone (postmarketOS edition) running mobian; this has been my daily driver for a few months now. My main fear when unboxing the L5 was that might not be significantly better than the PP. Luckily I was wrong. Those are my first impressions (in random order):

Overall I’m satisfied, I’ll see if I can fix the bluetooth problem and I’ll try out the GPS soon

I can’t even get the modem to work on my PP. I’ve been trying for a long time. I think there’s something wrong with the hardware (yes I checked the antenna connectors). Since my L5 is still a long way out (I ordered January 2019), I would just order a PP convergence bundle but they’re not selling them right now. Total sadness.

You really can’t get anything from the modem? Since I did not know about the antenna thing at first, I updated the modem firmware, have you tried? (I read the thread here)

Also, you can make use of the repairability feature and only order a new motherboard (out-of-stock, right now) and a PP docking bar (for convergence). There are videos on how to replace the motherboard. (I guess you didn’t kill switched off the modem…)

And make sure to input the SIM card in the right slot (the lower one) and that it should work with your network (activate it in another phone, if necessary…).

I updated the firmware twice (just to make sure).

Sometimes, with enough AT command prodding or turning the modem/data on and off, it can decide to work but it’s back to nothing after a restart.

I would rather get one of the newer phones with more memory but if a MB replacement was the only way, I would do it.

That’s what they are selling:

(Well, that’s community edition which has ended). I expect the motherboards to be back in stock after the factories start the production again after the recently Chinese New Year vacation. Probably they will be available at the same time with the restocking of PP with the default OS (March-April).

Sweet, I’ll keep an eye out for it.

It goes without saying that you should let it install all the updates that are available. Early on I had some lockups etc. but the frequency of that has dropped right away.

I’m having problems with bluetooth

Me too. A Bluetooth keyboard works fine but I was not able to get Bluetooth (music) sound output to work (so far).

Could not test GPS yet

I think GPS (GNSS) is not working in software yet.

It does not see my external micro sd card

It’s working for most people. I don’t think that it will automatically mount. Start with

Me too. A Bluetooth keyboard works fine but I was not able to get Bluetooth (music) sound output to work (so far).

Yeah, I could connect with a smart band just fine, but no way to connect to headphones.

It is a little bit fiddly to ensure that both the SIM card and the uSD card are correctly positioned in the tray, and stay that way as you slide the tray back in. Maybe bring the tray out again and check, if you haven’t already.

If still no joy, I would try a different uSD card, for fault isolation purposes.

I tried with another uSD. Also, I removed the sim just to have less things to care about, removed/inserted the tray a few times with no luck.

Thanks a lot for this comparison to the PinePhone. A friend of mine lended his PinePhone for a few weeks to me and while it’s very fun to mess around with due to it being so open, I use it a lot less than I anticipated because it’s slow and the battery life is really bad (even with everything toggled off, but with wifi only soft-toggled to easily enable it while at home). I hope it becomes a bit faster and gets better battery life with updates. If that happens I might start carrying it beside my android phone daily.

If the Librem 5 already has better battery and is faster at the same time as it also has room for battery and performance improvements, that makes me more optimistic!

Funny. My first impression when I opened the box was that Librem 5 is not at all so thick and heavy. I compared to my Moto G6 and the only difference is that it is a little bit thicker. But reading the terrible noise about how thick and heavy it is I expected much more. I suppose that people are comparing to those extremely thin phones - not to medium size phones like Moto G6. Compared to my old Nokia N900 it is even thinner but has a larger screen. But everyone has his own taste.

I really like the sturdiness of Librem 5. I use my phone in the forest and I would be very nervous with a thin phone. I cannot tell how it compares in other respects yet but it was important to change the settings of the TP-link C7 router to 20 MHz bandwidth to get a stable connection - it was useless with the auto setting. And the date setting was OK once I realized that I had a Swedish SIM card and set the time zone to Stockholm. Because you nowadays can use your SIM cards in the whole EU it is important that you are careful with the settings.

The phone antenna seems fairly good but I have to check the WiFi antenna because I have poor signal even close to the router.

But it is nice to have Debian in the phone (as I have in all computers). Almost everything is familiar except Gnome which I have never used. I suppose it will take some time to learn all the quirks …

I have no problem with bluetooth headphones:

Can you use wireless bluetooth headphones using Librem 5? Phones (Librem 5)

I tested a pair of Skullcandy (hate that name!) Sesh Evo wireless earbuds today, with success. Sweet! However, trying to answer a call was somewhat problematic and unsuccessful. Will investigate further and report back.

Plus, my microSD card was recognized right away. Lollypop displays and plays the stored music on the card fine. Files shows my card mounted and lets me explore the files.

I start to think that it might be an hardware problem then, for the microSD not being seen in any way 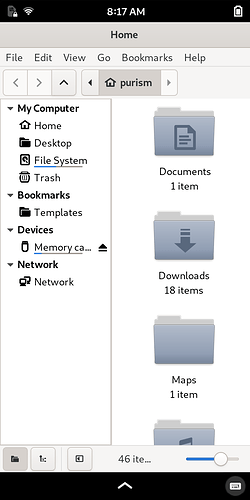 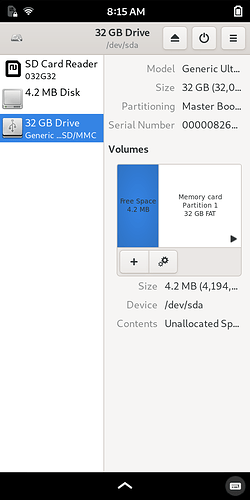 Disks app sees the ‘drive’ (it’s not a software problem), but under volumes it says: no media

I have tried bluetooth and i can connect to my desktop pc. But file transfer from the desktop to the librem5 does not seem to work.