Is the camera working?

The hardware should be functional, but the drivers aren’t complete yet.

Is the camera working?

What is the main contributor to the weight of phone?
Is it the battery that makes it heavy?

If @amarok weighs the Evergreen battery for us, we can check those guesses.

I’ll try to organize it when I get a chance. Or maybe someone will beat me to it.

There’s no pre-installed camera app yet.

Thanks Mladen, that’s awesome. I downloaded it from the store, and used it in landscape mode to change everything to dark. Super easy. I’ll figure out how to use Kyle’s script later.

Shucks, I was off by 1 gram. OK, the battery in Evergreen added 16 extra grams and the longer case added 8 extra grams.

@amarok, I’m updating the FAQ and need a bit of info.

Also, I contributed to the campaign on 7 September 2017, if anybody cares to know that.

This is exactly one month before my backer date, so there is hope and light visible at the end of the tunnel

I’m in California as well (Purism is based in San Fransisco), we’re likely getting shut down again between now and thanksgiving because no one will wear a mask sooooo it would really suck if all these years of developing a phone lead up to them being ready to ship but being shut down…although iirc manufacturing is fine because everyone can wear a mask, so hopefully we can still get our essential Linux phones…the tl;dr is to wear a damn mask

…there are some updates in -staging waiting for migration already though

That was included in the “Not many” part

Will report on MMS later.

MMS is still being worked on:

It'd be nice for MM to support MMS (https://en.wikipedia.org/wiki/Multimedia_Messaging_Service) send/receive. Where there any considerations what exactly would live within MM and...

That is an issue with GNOME Software on Debian based installs, firefox-esr shows as the old icewaesel

From the command line install the packages: firefox-esr and firefox-esr-mobile-config the last one includes tweaks to make firefox fit better in a mobile screen.

But is a browser the best solution for this?

At the moment we are missing an image viewer that is adaptive.

File manager: you can install nautilus (which is not adaptive yet) and scale it to fit the screen, not the same as adaptive, but it helps. To do that, download this script: https://source.puri.sm/Librem5/phoc/-/blob/master/helpers/scale-to-fit

And from the directory where the script is run: scale-to-fit org.gnome.nautilus on and it should look like this: 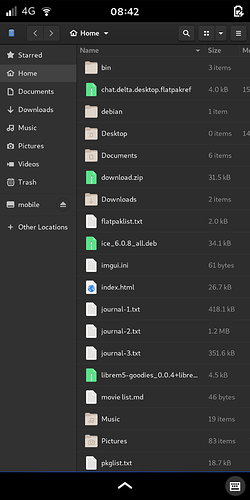 If you want to take screenshots, you can install from the command line the package: librem5-goodies it contains the application that @Kyle_Rankin made to take screenshots. After install it will show in the app tray as: Screen Shot

Also about scaling the screen: if you install the package librem5-goodies Kyle’s script to scale the screen is also there.

You can install GNOME Tweaks app and set any theme you want there: 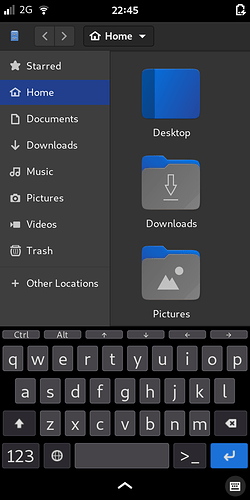 Note: GNOME Tweaks app does not yet scale nicely, but you can use Kyle’s script to change screen scaling:

You can also just add this to .profile:

Why did you do that? Why root access must be locked? So many years on Linux systems I am used to su. Why should I get used to something else? Can one bring root access back?

It depends. You can also search for and install “eog” but as I mentioned, it isn’t yet adaptive and you may have to use it in landscape mode.

So PureOS is not shipping the Gnome 3.38 release version of eog, which from my testing on the PinePhone scales perfectly?

And while I am at shameless self promotion, check out this app list (and please, if you can, do contribute):
https://linmobapps.frama.io.

Super looking forward to receiving my Librem 5, but given I backed it on October 23rd 2017 I guess I am going to have to wait a while.

So PureOS is not shipping the Gnome 3.38 release version of eog, which from my testing on the PinePhone scales perfectly?

The pureOS version on the Librem 5 is based in Debian stable, with an overlay layer for some packages. There are some packages that will be fast forwarded. And soon it will be based in GNOME 3.38