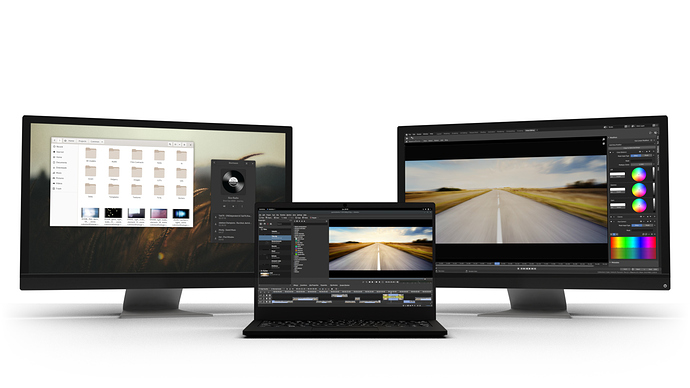 @francois-techene hi ! and thank you for posting !

it is highly appreciated to get a different angle but sadly the L14 has not been released yet so we can’t really say how MUCH faster the 6c-12t is going to be compared to the current L13 2c-4t.

what is your experience running display-cal on your L13 ? what calibration device are you using ?

It has the clean aesthetics that I like with Apple products

I have a visceral hatred of the “clean aesthetics” in Apple products. Apple set the standard in the industry of sacrificing functionality on the altar of style, which is a totally wrongheaded trend in my opinion. Just about every trend which I dislike in modern electronics design started with Apple (except for the move to 9:16 screens). I even dislike the interface of iOS and MacOS.

I’m a programmer, not a graphics designer, so maybe that explains why I detest Apple design, but the “creative types” love it.

but the “creative types” love it.

i don’t. and there is an entire “creatives” spectrum out there … i don’t want to shove everybody into the same “pot”

I have a visceral hatred of the “clean aesthetics” in Apple products.

I won’t go this far myself – I probably fall somewhere in between amosbatto and @francois-techene on this. I appreciate the aesthetics of Apple, but understand that their aesthetic is sometimes counter to the concept of “form is function” and rather often a vehicle for their planned obsolescence. I would say in addition to the 9:16 screens, I am a fan of the oft imitated, rarely matched use of milled aluminum to make their laptop exteriors. EXCEPT, that they put this very durable and energy-intensive shell around a computer that they will try to make useless to you in 3-5 years! I want to get a new laptop and keep the same shell, not throw away something that could physically last for a century or more.

As I have done TONS of unasked for rooting around inside my Librem 13 v4 recently (on which more later), I also have some choice comments about Purisms design aesthetic, which I don’t think is in line with their FLOSS hardware/software philosophy, or possibly even in line with their social purpose.

However, this is not an unqualified rant. Purism has had to make choices to exist and create products in a very hostile marketplace. Having chosen to focus on hardware/software instead of design was the right choice. Period. Many of their design problems are due to the fact that they have to “play ball” in an industry that only does things at scale. That being said, here are the three main problems, as I see them.

These are the reasons I (probably) won’t buy a Librem 14. I say probably because if they fixed #1, they at least wouldn’t be doing worse than other computer manufacturers. I would also need to see an improved hinge design.

Whew! Anyway, no one’s going to listen to me by myself. Others make noise, please.

I will design you one and make the CAD files public domain.

@ecs, I agree with everything that you said about the Librem 13/15 v4 design.

However, I’m not sure Purism has the rights to publish the CAD files for the Librem laptop cases, because Purism may be modifying a copyrighted design from an OEM to make its cases. I know that Purism says that it can’t publish the schematics for the Librem 13/15 because they are modified reference designs that are copyrighted by Intel.

Right, that’s my point – they shouldn’t have to use copyrighted designs to make the exterior of a public domain laptop! I understand why they’re doing it, but they need to move to change it…

I know that Purism says that it can’t publish the schematics for the Librem 13/15 because they are modified reference designs that are copyrighted by Intel.

you are referring to the schematics of the design of the motherboard of the L13/15 here while @ecs was specifically referring only to the external ENCLOSURE (chasis) of the L13/15 … did i get this right ?

Sorry, yes, I was told the chassis design was proprietary. I have to say that I wasn’t given a reference and I can’t reveal my source on that, so take it with a grain of salt. But I can’t see why else they wouldn’t release the chassis design. It could only help them if someone else made spare parts for them.

It could only help them if someone else made spare parts for them.

them ? who is them ? lol
if you would have a 100% replaceable compute device (chassis + hw + sw) then that would mean more national independence and strength … we can’t have that now can we ?

you are referring to the schematics of the design of the motherboard of the L13/15 here while @ecs was specifically referring only to the external ENCLOSURE (chasis) of the L13/15 … did i get this right ?

Hard to know what is included in the Intel reference design (since the general public can’t see it). It probably does include an example laptop enclosure because Intel wants the laptop manufacturers to get the thermals right. I know that Intel promotes a standardized keyboard, so I assume that is also included in the reference design.

However, I would assume that the ODM used by Purism has its own laptop case design and Purism asks the ODM to modify it to add kill switches, so the ODM is the copyright holder and not Intel.

Sorry, yes, I was told the chassis design was proprietary. I have to say that I wasn’t given a reference and I can’t reveal my source on that, so take it with a grain of salt.

We just modify public moulds (in particular to add the hardware kill switches) for the Librem 13 and 15. You can think of it like a reference motherboard design but for cases. It is rather expensive to create a custom, proprietary mould for a laptop case and up to this point it hasn’t been worth the extra expense when a public mould would do.

Thanks! So, by “public” does that mean non-proprietary? If they’re not proprietary, why are the designs not made available? Or does “public” here just mean “for general use by manufacturers”? Is that what @amosbatto is referring to by saying the original design manufacturer (ODM) is the copyright holder?

Regarding speed, the CPU of the Librem 14 has been benchmarked indeed and in my experience, those benchmarks are pretty reliable when it comes to pure CPU processing (like rendering a video or an image sequence in my daily usage).

Regarding calibration, I have to admit that I never used a calibration device. I don’t do digital painting and for grading my images and videos I always rely on the graphs instead of my eyes. Even with the best calibrated monitor, my eyes cannot tell me what’s pure black or pure white, which is my reference when grading.

Apple set the standard in the industry of sacrificing functionality on the altar of style.

@amosbatto, what I mean with “clean aesthetics” is more about the lack of visual artifacts in the chassis. You know, the fact that the laptop doesn’t look like a spaceship or a toy. That said, Apple actually has not always done that with the first iBook that looked pretty much like a plastic toy, and I haven’t always liked Apple’s design myself.

At Purism, we have a different approach than Apple in terms of design, which has nothing to do with sacrificing functionality at all. The Librem 14 has USB A ports, USB C ones, HDMI output, Jack, Ethernet, SD Card, hardware kill-switches, and even 2 ways of charging.

Our clean aesthetics approach is more about removing what is actually not a feature from the chassis. The main think being the branding that everyone puts on the back of the screen lid. I think that is ethical and it gives you a blank page if you want to customize the visual aspect of the laptop. I pointed to a previous blog post that describes our branding policy : https://puri.sm/posts/librem5-progress-report-18/

Thanks! So, by “public” does that mean non-proprietary? If they’re not proprietary, why are the designs not made available?

I’m talking about actual moulds not designs for a mould. The expense is in the actual physical creation of a mould that one can then reuse in mass production. Having design files for one of the freely-available (to manufacturers) public moulds wouldn’t necessarily do one much good as you would need the actual physical moulds and all the infrastructure behind it to make a case.

Granted I’m by no means an expert in this part of the process, this is just my limited understanding.

I understand now. I’m not an expert either, but I have some experience with the process. It does get a bit tangled – the part is injection-molded from the physical mold, but that mold was almost certainly machined using CAD files, and those files are made in turn made using a CAD file of the part itself. THAT file, as an accurate representation of what is ultimately molded, could also be used to generate 3D printed or CNC-machined parts. These parts would have a much higher unit cost, but have much lower overhead (since there’s no mold-making costs). I’m guessing it could probably be 3D printed for ~$100 or so? It would at least be an option for people with laptops where the part is broken and no replacement available (eg., the hinge problem).

Edit: Oh sorry, I just saw there’s a whole separate topic for just this complaint. Keyboard what a joke!

I know I’m just one customer, but I’m never going to buy a laptop with the keyboard layout this 14" has. I bought a 13"v3 and having the extra Fn off to the right of the right shift key has been fine. This new keyboard with the up arrow key just to the left of the right shift key… well, I’ve already tried using a loaner laptop at work with such a layout in the past and it drove me to the point where I had an external keyboard sitting in front of that laptop whenever and wherever I used it.

Almost everything else about this new 14" looks great, and I would purchase one in a heartbeat to replace my 13"v3 if it comes out with a keyboard much like I currently have.

I just wanted to once again repeat how much I like the design of the L14’s chassis. I really prefer the more block-like but still curvy design. It reminds me of a thinkpad, and that is a very good thing!

Really looking forward to getting mine!!