Dogwood, how about some updates on thermals?

Maybe @Torrone meant was that it doesn’t run a regular desktop environment like Gnome or KDE with x64 etc but instead an arm64 with an adjusted gnome (phosh) and using this on a desktop is also kind of odd as it’s meant for mobile use?

Solution: Dogwood, how about some updates on thermals?

I don’t know everything, but I do know that finding Type-C PD2.0 60W Flash Charge Data Cable that is capable of transmitting 20V/3A on his own is not a problem any more (even though not an accustomed purchase).

How is it not pure GNU Linux?

Android is based on a custom Linux Kernel and Google ART.

Maybe @Torrone meant was that it doesn’t run a regular desktop environment like Gnome or KDE with x64 etc but instead an arm64 with an adjusted gnome (phosh) and using this on a desktop is also kind of odd as it’s meant for mobile use?

No, I was speaking about Android.
You can run what you call “a regular desktop environment” on Librem 5 with PureOS or other Linux distrib. And Phosh is ok from this point of view as you can use it (it’s installed on my PC) as a desktop environment, even it’s for the moment less mature.

You mean anyone external?

Is there anyone who is not an employee that has any confirmed news, videos , pictures for Dogwood?

Do you know if Dogwood shipped to anyone yet?

You mean anyone external ?

We will be shipping them this week. We found a very odd issue that causes Dogwood to freeze during extensive burn-in in some conditions.
As such we have been working on addressing it, and this made our tests and troubleshooting take longer than anticipated.

We have informed the backers that were in the Dogwood batch of the situation. Asking if they would prefer to move their orders to Evergreen, or remain in Dogwood considering that we are troubleshooting the issue and addressing it. Everyone that choose to remain in Dogwood will have their Librem 5 Dogwood shipped this week.

This back and forth with the persons in Dogwood batch also took sometime.

In any case we will address this and provide more details soon, when we have compiled more information on the issue.

With this Dogwood issue solved, what is a likely date for Evergreen? I’ll pay more if I can get one for Christmas

I will refer to the post we just made in the Forum about this:

Customers who have chosen to receive Dogwood should have their Dogwood shipments go out today. But wait, you might say, didn’t you post that Dogwood was already “finalizing testing before shipping to those who are part of this batch” a few weeks ago? It’s true, at the time of that post we had started our final burn-in testing and started contacting Dogwood backers to confirm their current shipping address and also to give them an opportunity to switch to Evergreen if they wanted. It took a week…

I’ll pay more if I can get one for Christmas

lol ! use the donate to Purism from the online store and add it to your cart already

Great news, really looking forward to some actual user review of dogwood! with the last issues for the second to last batch finally out of the way, we can see what the hardware experience for the final product is going to be like. Thanks for the info!

The 12V fast charging is the big news in this update.

Yes! And somehow, I believe that (only) few S-VOOC2.0 car chargers like this one might be our best choice. Can someone (@joao.azevedo) test one with their Dogwood, for us waiting to get Evergreen/Fir, please!? Not an expert opinion, but Green USB-A output (as linked) should provide at least 4A at 12V. Or, am I too optimistic?

what? :o did they even announce the librem 5 would support fast charging? that’s pretty amazing!

Not an expert opinion, but Green USB-A output (as linked) should provide at least 4A at 12V. Or, am I too optimistic?

12V charging is announced! Rest on how to charge Librem 5 I need to find out too. Perhaps this might work well (by excluding direct usage of 5V only USB-A chargers).

@amosbatto, sorry that I continue to be unclear when asking questions (another nonexpert approach to understand how things work). Perhaps this below screenshot from ASUS official site explains one of possible solutions (that might be of interest to accept as something unusual, instead of 12V×1.5A, at least) for all users, including gamers on i.MX8M Quad: 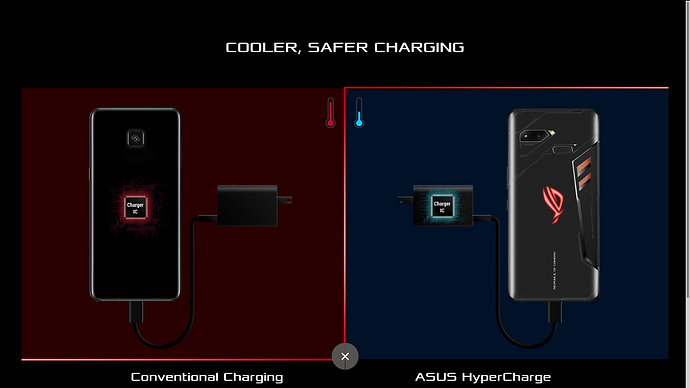 “The ROG Phone 30W Adapter & USB-C Cable uses direct-charge technology that puts the charging circuitry inside the power adapter rather than the phone. This delivers more power for shorter, safer charge times, and also means your ROG Phone stays cooler when it’s charging.”

The Texas Instruments TPS65982 USB Type-C and USB PD controller, power switch, and high-speed multiplexer in the Librem 5 supports Power Delivery up to 20V x 3A (60W), so higher watt charging may be possible, but I have to assume that Purism is only providing an 18W charger for a reason. There are many things that can limit fast charging, including the battery.

Traditionally Snapdragons varied the voltage and B&K Electronics (Oppo/Vivo/OnePlus/Realme) varied the amperage. Today, most fast charging standards (Quick Charge 4.0, SuperVOOC 2.0, etc.) vary both the voltage and the amperage, but everything has to be designed to handle the higher voltage and higher amperage, and Purism probably didn’t do that. Given the battery degradation caused by fast charging, I personally think that 18 watt charging is fast enough.

The charging controller is configured to feed the battery with at most 1.5A.

In my experience, 10W is usually enough to let the phone charge at full speed.

BTW. Currently the kernel drivers are missing the necessary plumbing needed for USB-PD negotiated currents to be propagated to charging controller, so the input current is always limited to 500mA. This is why the phone currently charges faster at higher voltage (and sometimes doesn’t charge at all when in use while attached to a 5V charger) - the maximum current stays constant. Once this is fixed (the code already exists, but isn’t merged yet) and once BC1.2 is implemented correctly, it should be able to automatically fast-charge with 5V chargers as well.

hopefully they can still improving battery

We are talking about 15% drain per hour, idle with every switch off. Not good.

I cannot measure L5 battery internal resistance (mΩ) but let us call it for a second (this exercise time), or “take it” as it is one NiMH AAA battery, instead to the NiMH AA type one, we should not threat it as the NiMH AA size one, charge/discharge the same, with increased current value of twice. Why? Because usually charging rate of high current AA round cell is allowed to be of double Amps value, 1000mA instead of max. 500mA (or 400mA, as linked here). Let us take a look at NiMH AA/AAA charger Opus BT-C2000, actually take a look at current (Amps) values used for particular NiMH AAA or NiMH AA battery from lygte-info.dk, borrowing just one small part his much broader knowledge for the purpose of what I’m trying to point out here.

I wrote above about NiMH chemistry but same rule applies to Lithium-ion chemistry used in L5 battery, it heats a lot because it is not (not based/manufectured on more adequate/preferable background purpose) or probably (for sure) not produced as higher continuous discharge rate (lower capacity) battery and therefore heats up a lot. Why therefore? Because i.MX8M Quad (including cellular modem card, the other one, etc.) drains its relatively weak battery a lot, with quicker rate as it should actually take place there (with 5.7 inch 30Hz display on at least 900mA (almost 1.0A), passive consumption of 900mA, no usage other than L5 display on). As its increased capacity (we are still pretending it is an over-pumped AAA round cell) tells us that it cannot behave the same way as AA battery with the same capacity, this “L5” AAA heats considerably during usage, discharging phase, of L5 and especially heats above its own health acceptable temperature when L5 charged and used at the same time.

I don’t have much practical experience but still know that recommended value for someones cordless (DECT) phone at home, with two NiMH AAA batteries, would be 600mAh (nowadays usually used capacity is 800mAh) and not 1200mAh, as continuous discharge rate during such cordless call would not keep up for very long, and certainly not extend two AAA 1200mAh battery life expectancy. Same applies to someones cordless mouse, you’d rather avoid usage of high capacity 2×AA batteries like much over of 2000mAh (if the one within 1000mAh range not available at your local store). Just my two cents, anyone like to disagree about my approach focused around L5 battery capability to cope with high discharge rate(s), continuous discharge rate(s)? Is this L5 battery rate already known within this Forum?

Let me kind of translate what I wrote above (trying to achieve) and ask here, is it L5 battery certified for continuous discharge rate of 2.0A or not? Do we need battery that can easily cope with 3.0+ Amps continuous discharge rate and stay that way much cooler (although its capacity would be obviously decreased to where batch Dogwood battery was). Should I guess that L5 battery heats considerably more under heavy app load when under 50% (3.8V) of its capacity?

reminding us about “lost as heat” and paraphrase it and question myself if current L5 batch battery can live up well with 1.86A (for example) pumping (charging) without any significant battery only/own thermals issue when L5 used in-house, at common room temperature. Same applies to L5 continuous self-discharging amperage rate that is with or without (might heat up too) significant (like phone call or gaming) load, taken from its battery only. Besides anyone considered usage of 4.5V (DCP coding with max. of 1.4A or perhaps 1.5A) as easier to handle or even better (not software related) option for L5, in order to avoid any significant battery heating issue. This combo, for example, will take someone that might be interested (@fiacco) there (to 4.5V charging output): Ripcord AA923MS (from power full enough QC3.0 or similar port) + Adapter 2.1mm to 2.5mm + SW2305 Converter, A-port version of ZC855 (not quite sure/experimenting at the moment if PD coding goes under 5.0V).

@tomoqv, thanks for your observation!

Librem5 does not charge through Nexdock360
It's a burning phone