Thanks Irvine,
I will order the phone and look forward to its arrival.
Cheers Gerzy

I was going for a fully offline install i.e. install dictionaries locally, with localhost dictionary protocol (RFC 2229) server, and the dictionary client (command line and GUI). (The point of the offline install is twofold 1. works with slow, flaky or non-existent internet connection 2. the privacy benefit of not sharing my word lookups with the internet.)

Works more or less. In the GUI the output is annoyingly slightly wider than the screen. That’s with the sidebar disabled, since otherwise it’s never going to fit.

One thing that I couldn’t work out is how to get the GUI to ask the server to search all dictionaries. This works at the command line (by default). This is functionality of the dictionary protocol (specify * for the dictionary) but the GUI always seems to have one dictionary selected for use.

(speeds in MB/s meaning decimal MB, not that it makes a huge difference)

With the card moved into the Librem 5 …

Did you rate your experiences (UX) here?

My starting point was 200+ contacts as schema valid LDAP data in LDIF format.

I thought the easy way to do this would be: import as a new address book into Thunderbird, then export address book as VCF, then scp the VCF file to the Librem 5, then use Contacts Importer.

And that did basically work. Certainly saved a lot of error prone typing!!

On the other hand, the original content wasn’t perfect and, as expected, the GIGO principle applies.

I’m declaring victory on that.

Just wondering when did you place your order for the L5?

Sorry if you answered this already, but I could not find if answered else where.

Early September 2017. There are “countdown” topics for Europe and for the US but as there isn’t one for A/NZ (too few customers?) I didn’t bother to post that info.

Today I tested: Some new toys

With the Ever Given having been dislodged, my toys arrived.

One thing I tested is a USB 3.0 to gigabit ethernet adapter. Mine has a USB-A male connector, so I can use it with any random computer, or in a dock connected to the Librem 5, or via a USB-A female to USB-C male adapter direct to the Librem 5.

Both ways of connecting to the Librem 5 worked out-of-the-box. Tick.

Another thing I tested is a USB-C external SSD drive, for connection direct to the Librem 5. That worked out-of-the-box, other than that the drive arrived formatted as exfat and the Librem 5 doesn’t have support for that type of file system out-of-the-box. Reformatting the drive as ext4 fixed that. Tick.

The third toy that I tested was a dock. That should allow charging of the Librem 5 (USB-C power passthrough) while connected to the above devices and (not tested) connection to an HDMI monitor. While charging worked, and the above devices worked, after a while the red light began to flash, charging stopped and the Librem 5 appeared to overheat. So I powered off and gave it a little rest. Needs more testing.

Because the root file system (the eMMC drive) is not quiesced. Files on it are changing in a manner that is uncoordinated with the process that is copying files onto the external drive. You will probably get lucky anyway but …

The right way to do this is either

Maybe I overlooked some options. Let’s see if anyone jumps in.

I’ve reconnected the dock but without the external drive and it is charging satisfactorily and the temperature is normal.

I made a diagram of where the various ports and switches and so on are:

FYI - there’s only one microphone at the bottom of the phone, the second thing you marked as a mic is actually a speaker. The second microphone is at the top near the headphone jack. Also, there’s proximity and ambient light sensor next to the selfie cam and you’re missing the smartcard slot as well.

Thanks. Here’s an updated diagram. 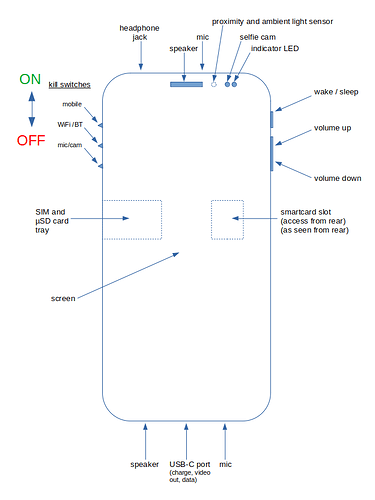 Today I tested … upgrading the firmware on the USB-C PD controller.

The command to check the firmware version is

and that was giving

The update procedure is a little untidy for me because my distro (Ubuntu) does not include uuu so I had to build uuu from source using the info from Purism. If anyone else needs to do this, I suggest replying here for more info.

I will note something from Purism’s web site: IMPORTANT: The firmware is for the Evergreen and Dogwood batches. Don’t flash it to other devices.

I don’t have a USB-C port on my computer, so I had to use a USB-C Male to USB-A Male cable that I had lying around (and that I connected directly into a USB 3.0 port on my computer). I would suppose that the update procedure might try to make the most limited demands on the USB port but I didn’t push it (e.g. by trying a USB 2.0 port or by trying to do it through a hub).

While connected for update, the Librem 5 showed up with lsusb as:

where obviously the bus number and device number will be different on your computer.

The update failed (harmlessly?) the first time due to not running the script as root (and the Purism doco doesn’t specifically mention this). The reasonable error was:

Maybe a udev rule on my computer would avoid that problem but I don’t anticipate doing this very often so couldn’t be bothered, so sudo ... it is.

After the update, and rebooting the phone, the above cat command gives

upgrading the firmware on the USB-C PD controller

Any specific improvement(s) you expect to get from doing that? Do you notice any difference afterwards other than the new firmware version number?

I was wondering whether anyone would ask. I had two motivations.

I haven’t retested the dock yet because I will want to test normal charging (via the Purism-supplied charger) first, just to make sure that there’s no regression there, and then maybe tomorrow I will try the dock again.